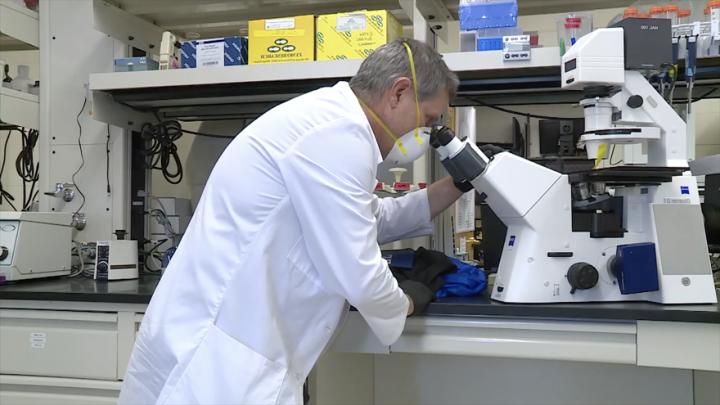 Jeremy Edwards, director of the Computational Genomics and Technology (CGaT) Laboratory at the University of New Mexico, and his colleagues at Centrillion Technologies in Palo Alto, Calif. and West Virginia University, have developed a chip that provides a simpler and more rapid method of genome sequencing for viruses like COVID-19.

Their research, titled,"Highly Accurate Chip-Based Resequencing of SARS-CoV-2 Clinical Samples," was published recently in the American Chemical Society's Langmuir. As part of the research, scientists created a tiled genome array they developed for rapid and inexpensive full viral genome resequencing and applied their SARS-CoV-2-specific genome tiling array to rapidly and accurately re-sequenced the viral genome from eight clinical samples acquired from patients in Wyoming that tested positive for SARS-CoV-2. Ultimately, they were able to sequence 95 percent of the genome of each sample with greater than 99.9 percent accuracy.

"This new technology allows for faster and more accurate tracing of COVID and other respiratory viruses, including the appearance of new variants," said Edwards, who is a professor in the UNM Department of Chemistry and Chemical Biology. "With this simple and rapid testing procedure, scientists will be able to more accurately track the progression and better prevent the onset of the next pandemic."

With more than 142 million people worldwide having contracted the virus, vigilant testing and contact tracing are the most effective ways to slow the spread of COVID-19. Traditional methods of clinical testing often produce false positives or negatives, and traditional methods of sequencing are time-consuming and expensive. This new technology will virtually eliminate all of these barriers.

"Since the submission of the paper, the technology has further evolved with improved accuracy and sensitivity," said Edwards. "The chip technology is the best available technology for large-scale viral genome surveillance and monitoring viral variants. This technology could not only help control this pandemic and also prevent future pandemics."