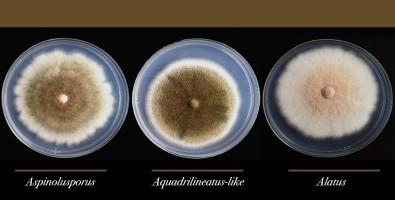 The species is more drug-resistant than its two parents and highly dangerous for patients with respiratory diseases and compromised immune systems. Courtesy of Gustavo H. Goldman/USP

Aspergillus latus, a species of fungus previously found only in soil or plants, has been found for the first time in a hospital environment by an international group of researchers. The group sequenced its genome and discovered that it is actually a hybrid and is up to three times more drug-resistant than the two species from which it derives.

An article on the study is published in Current Biology and coauthored by researchers from Brazil, the United States, Portugal and Belgium. The research was supported by São Paulo Research Foundation - FAPESP .

Aspergillosis is a lung disease caused by fungi of this genus, especially A. fumigatus, which is widely found in plants and soil. All humans regularly inhale spores of Aspergillus, which do not usually cause symptoms in healthy subjects. In patients with weak immune systems, however, the mold can cause pneumonia, build up fungal balls (aspergillomas) in the lungs, and spread to become invasive pulmonary aspergillosis, the most severe form of the disease. A. fumigatus is the most frequent cause of aspergillosis, but other species also cause the condition, including A. flavus, A. niger, A. nidulans and A. terreus.

"In about 90% of cases, infection by Aspergillus is caused by A. fumigatus, but in some human genetic diseases, A. nidulans is a more frequent cause. We therefore started assembling clinical material from various parts of the world to see how often this species occurred in a hospital environment. To our surprise, six out of ten samples contained a fungus that had never before been found to infect people," said Gustavo Henrique Goldman , a professor in the University of São Paulo's Ribeirão Preto School of Pharmaceutical Sciences (FCFRP-USP) in Brazil and coprincipal investigator for the study with Antonis Rokas, a professor at Vanderbilt University in the United States.

Genetic sequencing also revealed that A. latus is a hybrid of two relatively distantly related species and contains complete copies of the DNA of both parental species. Tests performed by other groups have already shown that A. latus can be up to three times more resistant to anti-fungal drugs than its parental species, A. spinulosporus and an unknown relative of A. quadrilineatus. It also more effectively combats human immune cells.

"The fungus gains significant advantages from being a hybrid," Goldman said. "Accurate identification of the species that causes the infection is important in order to decide on the best treatment and avoid resistance to existing drugs."

However, he added, few Brazilian hospitals currently have the resources to perform genetic sequencing in order to identify the fungi that contaminate patients with greater than genus-level precision. Identification is typically achieved by morphological analysis under a microscope, which leaves room for misdiagnosis. The samples of A. latus used in the study, for example, had previously been labeled as A. nidulans by this method.

The presence of fungi in hospital environments is a well-known factor in disease aggravation and even death. In collaboration with researchers in Germany, Goldman and his group are now assembling samples of fungi present in the lungs of COVID-19 patients with the aim of investigating how these organisms can aggravate their condition as a basis for developing strategies to avoid and combat infections.

"Several COVID-19 patients have died owing to concomitant infection by Aspergillus," Goldman said. "We currently have four strains that were isolated from patients who died of COVID-19 in Europe and will sequence their genomes to identify the species and see if they're favored by the disease."

He is looking for partners to help collect material in Brazil, but the sample isolation procedure entails a strict clinical protocol not yet in use in Brazil that ensures health workers and researchers are not infected by the novel coronavirus. In Europe, the experimental protocol was implemented in time for the pandemic.

Cases of concomitant COVID-19 and infection by fungi of the genus Aspergillus evidence the importance of knowing more about these microorganisms. For example, A. fumigatus is found worldwide and capable of surviving under extreme conditions, such as temperatures of up to 70 °C and a scarcity of nutrients. It can even extract food from water.

"We've now brought to light another feature of the genus, which is the formation of hybrids," Goldman said.

For the recently published study, the researchers assembled ten samples of fungi mainly found in material collected from patients with allergic bronchopulmonary aspergillosis and other disorders, such as chronic granulomatous disease, caused by a genetic dysfunction that impairs the immune system, and chronic obstructive pulmonary disease, including chronic bronchitis and emphysema.

The samples were collected in Portugal, Belgium, the US and Canada. Sequencing confirmed only three to be A. nidulans. One was identified as A. quadrilineatus, a soil fungus that also infects humans, and the other six as A. latus, hitherto found only in soil and plants.

A. latus is the first hybrid filamentous fungus known to cause disease in humans, a relatively common property of yeasts such as those of the genus Candida, which causes candidiasis. Another curious feature of A. latus is that it is diploid; i.e., its cells contain two sets of chromosomes, similar to all human cells except egg and sperm cells. Most fungi are haploid, with only one set of chromosomes.

The hybrid also retains the DNA from both parental species, suggesting that the fusion is recent. Genes are recombined in ancient hybrids or species that diverged from a common ancestor eons ago, and some genes are lost or change position during the process of evolution.

Mules are a well-known example of a hybrid. They have 63 chromosomes, a mixture of the mare's 64 and the donkey's 62. In the case of A. latus, however, the genetic material of both parents is preserved in its entirety.

"Another curiosity is that the genetic distance between its two parental species is more or less the same as that between Homo sapiens and the lemur," Goldman said, referring to the 88 species of Lemuroidea primates native to Madagascar in Africa.