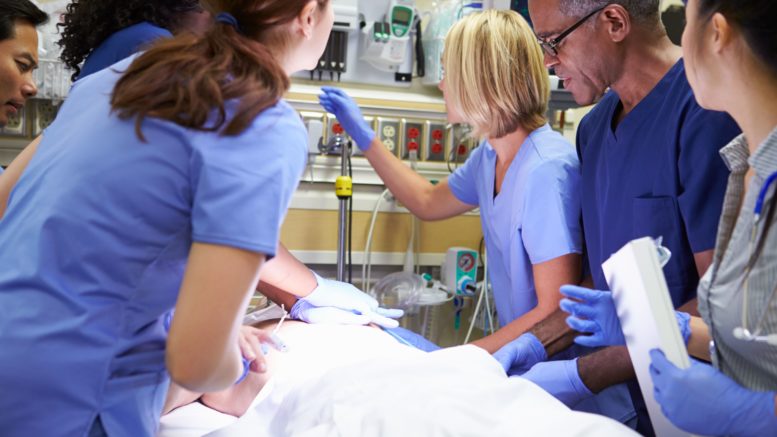 Exactly what kills a person with COVID-19? How do those deaths differ from the deaths of people whose lungs fail rapidly because of other infections or injuries? And what can hospital teams pressed into service on overtaxed COVID-19 wards do to try to keep patients from dying, despite strained circumstances? All of these questions have sparked discussion - and even conspiracy theories - since the pandemic began. Now, two studies from Michigan Medicine may help answer them.

The bottom line: COVID-19 deaths are indeed different from other lung failure deaths. But, the researchers conclude, the kind of care needed to help sustain people through the worst cases of all forms of lung failure is highly similar. It just needs to be fine-tuned to focus on the damage COVID-19 does to the lungs.

Both studies rely on a standardized in-depth examination of medical records of people who died at Michigan Medicine, the University of Michigan's academic medical center. For each death, the researchers determined which organ system dysfunction most directly resulted in the person's death, or the decision to remove the patient from life support.

In 82 people with COVID-19 who died in the spring and early summer of 2020, that examination of records found that 56% died primarily from the failure of their lungs.

That means they died due to the damage caused by the coronavirus, even if they had other problems and complications of COVID-19 at the time of death. The findings are published in the Annals of the American Thoracic Society.

That's more than twice the rate that researchers saw in the other study, which is based on more than 380 people with similarly severe lung failure who died at the same hospital in years before COVID-19 arose.

"These findings underscore the importance of trying to deliver evidence-based interventions for respiratory failure in COVID-19 patients as the pandemic continues, especially as professionals who don't normally treat this condition or work in an ICU are pulled into service," says Scott Ketcham, MD, the internal medicine resident who led both studies. "This means prone positioning, a good working knowledge of mechanical ventilation, appropriate selection of patients to receive heated high flow oxygen, and early recognition and treatment of infection. In other words, following guidelines developed before by those who specialize in treating respiratory failure like acute respiratory distress syndrome and sepsis."

The COVID-19 patients in the new study were treated before evidence emerged about the effects of dexamethasone and remdesivir on progression of severe cases of the disease, says Hallie Prescott, MD, MSc, the associate professor of pulmonary and critical care medicine who is senior author of the paper. Those options have likely increased survival in the time since.

"There was a lot of talk in the beginning of the pandemic that this was new, and that best supportive care principles already used in ICUs didn't hold true," she says. "But increasingly we realized that all the things we've learned in the past 20 years probably will save people with COVID-19, and that the more we learn about it, the more it seems consistent with ARDS in general. Therapies specific to the respiratory component of this disease will almost surely improve survival."

Prescott and her colleagues have offered a number of webinars and online resources to help providers unused to caring for respiratory failure and sepsis. For instance, simply placing patients in the prone position isn't sufficient - it's also important to move them often so that they don't develop sores that can become entry points for secondary infections.

They include the webinars offered by the Mi-COVID19 consortium that is studying and working to improve COVID-19 care in hospitals across Michigan, posts on the Life in the Fastlane blog for emergency and critical care education by Jack Iwashyna, MD, PhD, from U-M and VA Ann Arbor, and a seminar that Prescott and Iwashyna presented through U-M's Institute for Healthcare Policy and Innovation.

In addition to looking at the cause of death and related medical measures, Ketcham and his colleagues also looked at the support that patients and families received in the last days of the patients' lives.

In both groups, more than two-thirds of patients were on ventilators or other significant respiratory support when they died, and more than three-quarters of patients died after life support was withdrawn.

But among the COVID-19 patients, the study finds that less than a third had an advance directive in place, stating their wishes should they become critically ill or need someone to make medical decisions for them.

During their COVID-19 hospitalization, about 80% of patients had a goals-of-care conversation with providers documented in their record - most often, one that a provider had by telephone with a family member.

Such conversations take into account the patient's current situation, as well as any advance directives or informal discussions with family they might have had before they became ill. They're important for informing later discussions about treatment or withdrawal of life support.

About 80% of patients received a visit from a spiritual care team member during their hospitalization - but of those who were placed on a ventilator, only 10% got to see a spiritual care provider before they were intubated, when they would have been able to interact more fully.

Ketcham notes that in the first months of the pandemic especially, but even in the months since, the ability of friends and family to connect in person or virtually with critically ill COVID-19 patients has been severely limited across the country. And even when hospital policies have allowed in-person visits, such as at the end of life at Michigan Medicine, family members haven't always wanted to come in person out of fear for their own health.

As a result, only one-third of the patients in the study had family or friends with them when they died, and 55% had neither a virtual visit with friends or family within 24 hours of their death, nor anyone but their care team present when they died.

"The medical therapies we use to treat COVID-19 patients are important, but it's also important to remember to care for, not just treat, these patients," says Ketcham. "We need to think about the individual as a whole, emotionally, spiritually and socially. We need to look at what we gain from visitation policies in terms of transmission, and how we can use technology to connect providers to families, and patients to families and friends."