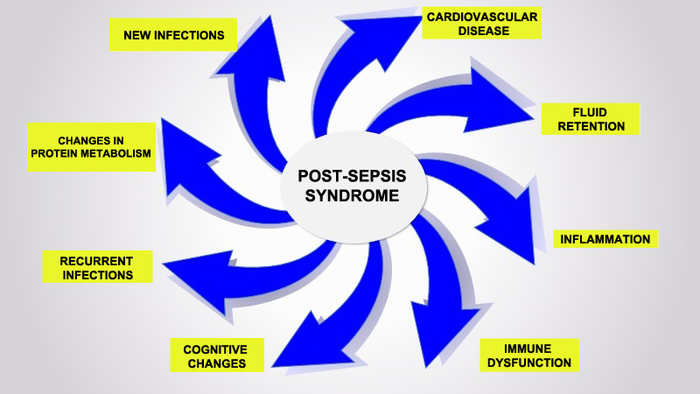 Many patients suffer from a significant decline in immunity lasting for years after they are discharged from the hospital. Courtesy of José Carlos Farias Alves Filho

Sepsis is the leading cause of death in Brazil’s intensive care units (ICUs). Among patients who progress to the severe form of the disease, 40% die, and the survivors often suffer from cardiovascular and neurological complications, as well as a significant decline in immunity lasting for years after they are discharged from hospital.

“Studies suggest survivors of sepsis face a sevenfold higher risk of developing severe infections than individuals who have never had the disease. They’re susceptible even to opportunistic pathogens that don’t usually cause disease in healthy people. We’re starting to understand why this happens,” José Carlos Farias Alves Filho, a professor at the University of São Paulo (USP) in Brazil, told. Alves Filho was the principal investigator for a study on the subject due to publish today in Immunity.

Sepsis, also known as generalized infection or septicemia, is in fact a systemic inflammation often triggered by a localized infection that spirals out of control. The body’s immune response to the pathogen, which can be a bacterium, a fungus, or even a virus like SARS-CoV-2, produces excessive amounts of inflammatory substances that damage the organism. The more severe forms of sepsis can cause injuries to vital organs, low blood pressure, and ultimately a form of acute circulatory failure known as septic shock.

To understand how this leads to immunosuppression, Alves Filho and his group performed experiments on mice and immune cells isolated from the blood of septic patients. The investigation was conducted by Daniele Carvalho Bernardo Nascimento with a postdoctoral fellowship from São Paulo Research Foundation - FAPESP. The researchers are affiliated with the Center for Research on Inflammatory Diseases, a Research, Innovation and Dissemination Center hosted by the University of São Paulo’s Ribeirão Preto Medical School (FMRP-USP).

“Simply put, our findings show that sepsis induces the proliferation of a subpopulation of B lymphocytes that express large amounts of CD39, an enzyme that breaks down ATP [adenosine triphosphate, the main source of energy for cellular processes] to release adenosine into the bloodstream,” Alves Filho said. “The increased level of adenosine in the blood reduces the activity of macrophages, the defense cells that phagocytize bacteria, fungi and other potential threats to the organism.”

Previous research had already discovered that adenosine levels rise in the initial stages of sepsis and that this has an immunosuppressant effect. Adenosine binds to a receptor called A2aR on the surface of macrophages, inducing production of interleukin-10 (IL-10), a molecule with anti-inflammatory action.

The novelty in this study is its demonstration that adenosine plays a key role in the development of post-sepsis immunosuppression and that one specific type of cell is the source of the additional adenosine found in the blood of septic animals and humans.

“All immune system cells express CD39 at varying levels, but we found that a subclass of B lymphocytes called plasmablasts produce large amounts of this enzyme,” Alves Filho said. “We saw plasmablasts proliferating strongly after sepsis, and undergoing metabolic reprogramming. They began to consume more glucose and hence to produce more ATP. At the same time, they expressed large amounts of the enzyme [CD39] responsible for hydrolyzing ATP and releasing adenosine. It’s as if soldiers could produce their own ammunition.”

To induce severe sepsis in mice, the scientists used a model known as cecal ligation and puncture (CLP), which consists of perforation of the cecum (the start of the large intestine) to allow the release of fecal material and bacteria into the peritoneal cavity. The procedure simulates what happens in a patient with suppurative appendicitis. Mice that survived sepsis were monitored for 90 days and found to be highly susceptible to opportunistic pathogens throughout the period. None of the animals exposed to the bacterium Legionella pneumophila survived. Only 20% survived exposure to the fungus Aspergillus fumigatus.

To confirm the importance of adenosine to post-sepsis immunosuppression, they conducted experiments with drugs that inhibit CD39 or the A2A adenosine receptor. The survivors rose to 60% of those “treated” in this manner before exposure to opportunistic pathogens.

When the same experiment was performed on animals genetically modified so as not to express CD39 or A2aR, the survival rate was 70%.

Several other tests were conducted in mice to elucidate the immunosuppression mechanism step by step. In one experiment, healthy animals were given an infusion of plasmablasts isolated from septic animals, becoming susceptible to opportunistic pathogens as a result.

A similar experiment was performed using human cells. Macrophages isolated from healthy subjects were incubated with plasmablasts from septic patients and with an opportunistic bacterium. Owing to the action of adenosine, defense cells were unable to kill the microorganism.

The mechanisms by which sepsis causes proliferation of the B lymphocytes that produce CD39 are still poorly understood. The researchers also plan to find out whether levels of adenosine in the bloodstream of patients who survive severe sepsis remain high for a long time, as they do in mice.

In a previous study, reported in an article published in Nature Communications in 2017, the group led by Alves Filho showed that sepsis triggers proliferation of another type of immunosuppressive cell known as regulatory T cells or Tregs.

“We had already demonstrated that sepsis triggers an increase in Tregs that correlates with levels of IL-10. In this study, we show that the adenosine produced by plasmablasts is a mediator that leads to IL-10 production by macrophages in septic survivors. So these two studies connect: plasmablasts induce production of IL-10 by macrophages, which in turn can promote an increase in Tregs and make the patient even more immunosuppressed,” Nascimento said.

Identification of this novel mechanism should facilitate the search for interventions capable of combating immunosuppression. “We believe that if we succeed in inhibiting plasmablast growth, we can reduce immunosuppression and thereby increase the life expectancy of sepsis survivors,” Nascimento said.