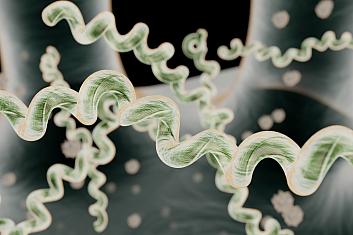 Lyme disease cases are becoming more frequent and widespread. Currently, it affects almost half a million people nationwide each year.

Lyme disease is caused by a bacterium, Borelliella burgdorferi, that is transmitted by tick bites. Treatment entails the use of broad-spectrum antibiotics, which have considerable drawbacks. These drugs kill not only B. burgdorferi, but a wide range of other bacteria as well. As a result, they can damage the patient’s gut microbiome and select for resistance in non-target bacteria.

A team of researchers led by Dr. Kim Lewis at Northeastern University wanted to find an antibiotic that would kill B. burgdorferi while leaving other bacterial species alone. The results of their search appeared in Cell on Oct. 14, 2021. NIH’s National Institute of Allergy and Infectious Diseases (NIAID) supported the study.

The research team suspected that compounds that selectively kill B. burgdorferi might already exist in nature. Many broad-spectrum antibiotics in use were discovered in soil-dwelling bacteria. The researchers thought these bacteria might also make an antibiotic specific to B. burgdorferi. To find out, they screened extracts from more than 450 soil bacteria. They found one that was potent at killing B. burgdorferi but not another type of bacteria that was used as a control.

The researchers purified and identified a compound from this extract that acted against B. burgdorferi. It turned out to be hygromycin A, an antibiotic discovered in 1953. Previous research on hygromycin A was abandoned due to its weak activity against most bacteria.

The team confirmed that hygromycin A did not kill most bacteria, including many beneficial gut microbes. But it did kill B. burgdorferi and other bacteria in the same class very effectively.

Hygromycin A works by blocking the cellular machinery that makes proteins. This machinery is highly conserved across all bacteria. So, the researchers were puzzled about why hygromycin A only worked on one class of bacteria. Further investigation showed that B. burgdorferi took up the drug much more easily than other bacteria. B. burgdorferi use a specific protein on their surfaces to take in certain essential nutrients from the environment. This protein allowed hygromycin A to enter the cell.

Hygromycin A could make an attractive therapeutic candidate. Hygromycin A baits could also be used to clear the disease from wild mice. Since mice are the principal hosts of B. burgdorferi, this strategy might help to eradicate the disease at its source.