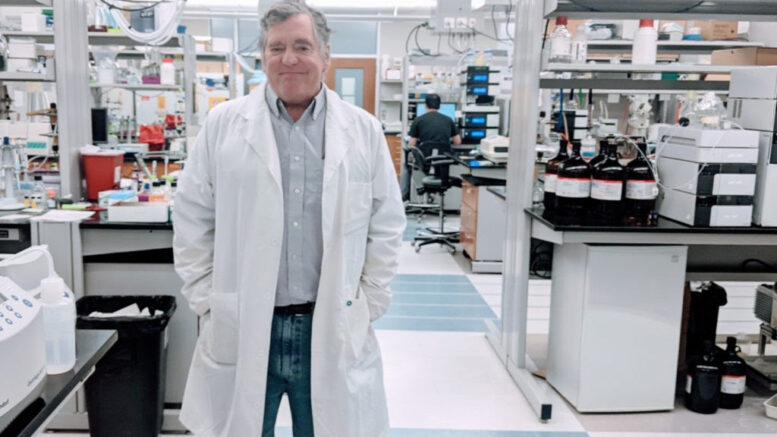 Thomas Meek, PhD, professor in the Department of Biochemisty and Biophysics, is one of the key researchers in the collaborative study. Courtesy of Texas A&M AgriLife

The SARS-CoV-2 virus associated with COVID-19 is highly contagious and has led to a global pandemic. To date, more than 130 million people worldwide have been infected and more than 2.8 million have died from COVID-19.

The study, recently published on the ACS Chemical Biology website, shows that small concentrations of an enzyme inhibitor called K777 strongly impede the infection of several cell lines by SARS-CoV-2, which causes COVID-19. It also demonstrated the efficacy of K777 in reducing the ability of the virus to infect host cell lines without causing harm to the host cells.

The study’s primary author is Drake Mellott, a doctoral candidate in the Texas A&M Department of Biochemistry and Biophysics in the College of Agriculture and Life Sciences. The study’s senior authors are Thomas Meek, PhD, a professor in the Department of Biochemistry and Biophysics, and James Mckerrow, PhD, MD, dean of the Skaggs School of Pharmacy and Pharmaceutical Sciences at UC San Diego. Another key author is Chien-Te Tseng, PhD, professor of microbiology and immunology, University of Texas Medical Branch.

K777 has been approved by the Food and Drug Administration as a Phase II clinical-stage compound.

Meek said while a number of vaccines can now largely prevent infection by the virus, medicines are still needed to treat those who become infected and develop severe symptoms.

“We also need therapies that may be able to address the potential emergence of strains that may not respond well to current vaccines,” he said.

A few examples of using such a strategy have already been employed, including the FDA’s approval of the antiviral drug remdesivir and an emergency use authorization for monoclonal antibodies in treating more serious cases of COVID-19.

“Since 2014, our lab’s mission has been to investigate and understand the chemical mechanisms of enzymes that are validated drug targets, and to utilize these mechanisms to develop rationally designed inhibitors and inactivators of these enzymes,” Meek said. “Our goal has been to use synthetic and medicinal chemistry, protein expression, crystallography, molecular modeling, mechanistic enzymology and inhibitor characterization to find novel ways to address diseases. The diseases we have been focusing on include tuberculosis, African sleeping sickness, Chagas disease, malaria and now COVID-19.”

“This led to closer scientific investigation of the chemical mechanisms of these viruses and gave us a better understanding of the essential enzymes and proteins of this family of viruses,” Meek said.

Among these discoveries was that the SARS-CoV-2 virus requires an enzyme called cathepsin L. to cleave its spike protein so it can dock onto and infect human cells.

Another discovery was that Trypanosoma cruzi, the parasite found in a species of “kissing bugs” that serve as an insect vector for Chagas disease, produce an enzyme called cruzain that helps them evade the human immune system.

McKerrow and his colleagues at UC San Diego have been looking at cruzain inhibitors as a possible basis for new anti-parasitic medicines. In their investigations, they discovered that K777, a prospective drug for Chagas disease, was also effective in blocking cellular infection of mammalian cells by SARS-CoV-1.

Along similar lines, Meek and his colleagues were developing other potent cruzain inhibitors. They hoped to find something that would either directly impact or could be chemically modified to inhibit cathepsin L, which is made by mammalian cells and implicated in allowing SARS-CoV-2 to infect host cells.

Because cathepsin L is similar in many ways to cruzain, and K777 was found to be an effective inhibitor for cruzain, the researchers hypothesized it would also likely be an effective inhibitor of cathepsin L. They also thought that because K777 inhibits a human enzyme and not the virus itself, SARS-CoV-2 might be less likely to evolve resistance to it.

“The study shows the ability of a protease inhibitor called K777 to inhibit cathepsin L, a host cell enzyme that is essential to the cellular entry of SARS-CoV-2,” Meek explained. “The virus uses an ACE2 receptor to latch onto the cells after interacting with cathepsin L. The K777 compound inhibits the processing of the coronaviral spike protein, which then blocks viral entry into target host cells.”

While the researchers were pleased with how effective K777 was in blocking viral infection in the lab, they noted it wasn’t equally effective in all cell lines. They hypothesize this is due to differences in the amount of cathepsin L in the cells. Another possibility is that some of the host cells contain lower levels of ACE2.

However, lab results from the collaboration provided by Utah State University showed that K777 inhibitor was best at preventing SARS-CoV-2 infection in the cells that produced the most cathepsin L and ACE2.

Recently, Selva Therapeutics, a privately held biotechnology company, licensed K777 from UC San Diego and has received FDA approval for its use in clinical trials. A Phase II clinical trial in non-hospitalized COVID-19 patients is currently slated for late 2021.

“This has been an excellent example of cooperation among academic institutions, government entities and private enterprise to identify, research and assess viable options for treating COVID-19,” Meek said. “And it’s highly probable that the same sort of collaboration would be effective in finding direct or alternative-use treatments for other diseases as well.”

Research funding for the study was provided in part by the National Institutes of Health, Texas A&M AgriLife Research, the Texas A&M University System, the Burroughs Wellcome Fund and Selva Therapeutics, Inc.