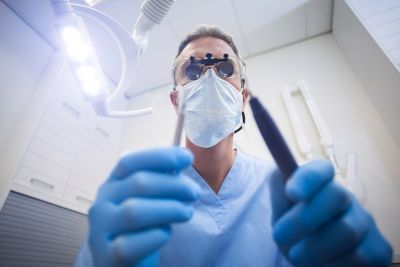 According to a study from the University of Illinois Chicago, adding a small amount of hydrogen peroxide to the water in ultrasonic scalers used to clean teeth can help mitigate the risk of spreading airborne diseases, including COVID-19, in clinical dental environments.

Researchers from UIC’s College of Dentistry and College of Engineering co-authored “Effect of H₂O₂Antiseptic on Dispersal of Cavitation-Induced Microdroplets,” published in the October the Journal of Dental Research.

Dentistry faculty approached colleagues in engineering to evaluate ways to safely reopen UIC’s dental clinic while it was closed at the beginning of the COVID-19 pandemic, said Constantine Megaridis, UIC distinguished professor of mechanical and industrial engineering, and corresponding author of the paper.

Because ultrasonic instruments and other dental tools contribute to aerosolized saliva, contaminated water, or blood, and raise the risk for spreading pathogens to surroundings, researchers sought strategies to mitigate the risk of airborne transmission of particles containing SARS-CoV-2.

Some dentists already knew that adding 1% hydrogen peroxide or 0.2% povidone offered the potential benefit of mild antiseptics, leading to the idea that adding the peroxide compound to dental instruments’ water supply could mitigate virus spreading through particles ejected during dental procedures. For this study, engineering faculty tested how the spray produced by a common ultrasonic scaler device is changed by adding hydrogen peroxide to the device’s water supply.

The results showed that the addition of the oxidant hydrogen peroxide “affects the droplet size and the ejection velocities in ways that offer data-driven guidelines for mitigating the risk of airborne disease spreading,” the authors wrote.

According to the researchers, adding the hydrogen peroxide to the ultrasonic scaler water stream should reduce infection risk because the number of small droplets from the patient’s mouth is reduced or eliminated. It also reduces infection risk because hydrogen peroxide is a more hostile medium for pathogens in-flight and once they land. Simulated pathlines of water and pathlines of hydrogen peroxide ejected from the same point show droplets with the solution are larger and have a higher velocity, which translates to lower residence times in the air.

Though researchers did not test droplets that actually contained virus, they hypothesize that the probability of any virus in a patient’s mouth surviving is reduced by the hydrogen peroxide solution. In larger doses, hydrogen peroxide may be harmful, however the 1.5% solution is safe and was being used by some dentists during the pandemic.

“We’ve found that adding hydrogen peroxide is indeed a well-founded approach. It doesn’t require modification to instruments. Just a 1% or 2% solution of hydrogen peroxide does the job,” Megaridis said. “This compound not only aggressively fights the survival of the virus in-flight and on surfaces, but also creates larger droplets which further reduce the probability for long residence times in the room air.”

Further research would be necessary to find the actual pathogen load of the droplets (which depends on interactions of the ejected fluid with oral tissues and teeth), the corresponding liquid properties, and the role of the dental device’s movement around the mouth plays in droplet airborne dispersion, according to the study.