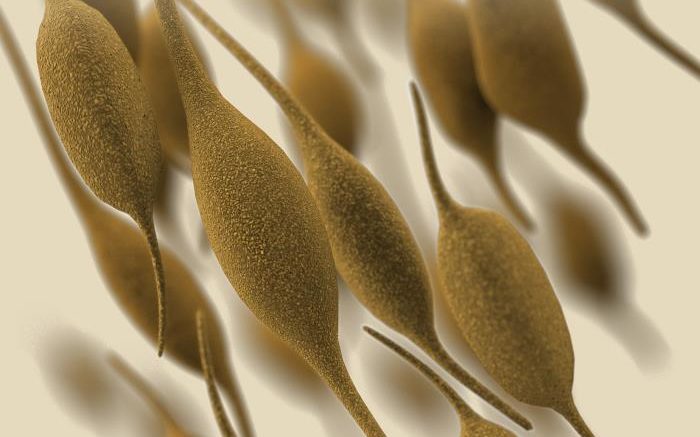 This illustration depicted a three-dimensional (3D), computer-generated image, of a group of Mycoplasma pneumoniae, bacteria. The artistic recreation was based upon scanning electron microscopic (SEM) imagery. Courtesy of CDC/Sarah Bailey Cutchin

Researchers at UConn's Center of Excellence in Vaccine Research (CEVR) have made a breakthrough in vaccine development for a common and difficult to treat pneumonia-causing pathogen. Their research was recently published in the Nature Partner Journal - Vaccines.

For Mycoplasma pneumoniae, vaccine development has been stalled since the 1960s due to a phenomena called vaccine-enhanced disease (VED) or vaccine induced disease exacerbation. A vaccine for this type of community acquired pneumonia has been sought after since the illness can pose problems for closed community settings such as military bases, hospitals, ships, college dormitories, and prisons.

"Two different vaccines were developed by the National Institutes of Health," says Assistant Professor in Pathobiology and Veterinary Science Steven Szczepanek. "In trials, most vaccinated subjects were protected from infection and showed no symptoms. However, for some vaccinated and infected subjects, symptoms were actually worse than those observed in people that did not receive the vaccine. This is vaccine-enhanced disease and is of course really bad."

A vaccine must strike a balance. The formulation needs just enough potency to ensure the immune system will be able to recognize a pathogen and easily kill it if the patient re-encounters it. If all goes according to plan, vaccinated patients are able to easily clear a reinfection without even knowing they were re-exposed. However, a vaccine can sometimes lead to an overreaction by the immune system upon reinfection. This vaccine-enhanced disease has been seen with other pathogens such as respiratory syncytial virus (RSV), Dengue fever, and in animals models in SARS vaccine research, says Steven Geary Department Head of Pathobiology and Veterinary Science and Director of CEVR.

VED is contradictory to the very basis of vaccination.

"We're trying to develop prophylactic vaccines to prevent infections from occurring in healthy people. If the vaccines we develop will actually make infections worse in 1/3 people that get the vaccine, then most people are not going to take the vaccine - and rightfully so," says Szczepanek. "We're not talking about cancer therapeutics where the subject is already sick, where the potential benefit of finding a cure often outweighs the risk of an adverse event occurring. The medical community, and people in general, have very little tolerance for adverse events occurring in a product that is given to otherwise healthy individuals."

To get to the root cause of VED with M. pneumoniae vaccination, the researchers analyzed the building blocks of the bacteria -- the proteins, lipids, and lipoproteins -- to determine if they elicited an immune response.

"We decided to systematically tear the bug apart using different chemical and physical approaches and test different components as vaccines to see if we could identify what, exactly, was causing VED after infection. Before we started this process, we hypothesized that it was the membrane bound surface lipoproteins that were causing VED," says Szczepanek.

The team also studied details about the host immune system and what qualities of the pathogen would lead to the occurrence of VED.

"That's the $64,000 question. The short answer is that we don't know the full picture. Chemical signals used by the immune system called "cytokines" help to drive specific types of immune responses to different pathogens," says Szczepanek.

A confounding trend the researchers have found is the cytokines that play a key role in vaccine protection to another pneumonia-causing bacteria, Streptococcus pneumoniae, are the same cytokines driving VED with M. pneumoniae. This is an example of the nuances and complexities behind vaccine development explains Szczepanek.

"We can't even use what we know about immunity from one bacterial pathogen that causes a similar disease to understand what happens during infection with a different species. Each pathogen is complex and unique, so it seems that we will stay employed for many years to come."

The researchers were able to narrow down the candidates to certain lipoproteins on the surface of the bacteria to test their hypothesis about the immune-inducing culprit.

"After some pretty extensive testing we found out that we were right," says Szczepanek. "Chemical removal of the lipid portion of purified M. pneumoniae lipoproteins eliminated VED, and even drove some level of protection from infection. We still have some work to do to fully optimize the efficacy of a vaccine formulation, but we have identified and eliminated the cause of the nagging roadblock of VED that plagued the field for over half a century. Safety problems are no longer a concern for M. pneumoniae vaccines."

The road to a safe and effective vaccine is a long one, but the researchers at CEVR are excited to be moving forward after overcoming the difficult hurdle of VED, says Geary.

"We have to prepare and refine candidate M. pneumoniae vaccines that do not contain lipoproteins, and test them in our animal model. We will also be testing different adjuvants (compounds that are added to vaccines to increase the proper immune response). Once we have defined the precise vaccine formulation we will proceed with a phase 1 clinical trial in humans. If successful, we will continue on the FDA proscribed phase 2 and 3 clinical trials required for all human vaccines and hopefully then find a partner to produce and market it."

It is a team effort Geary adds, "The majority of the hands-on experimentation and data evaluation to date has been conducted by PhD candidates Arlind Mara and Tyler Gavitt, who will continue to perform the immunologic and vaccine efficacy analysis as this project progresses to the point of a successful vaccine."