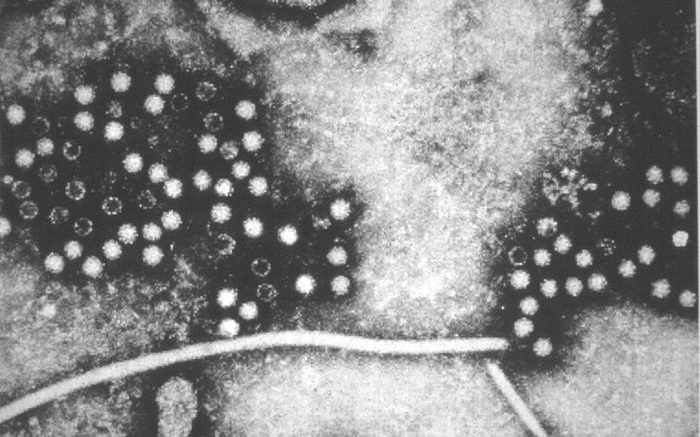 An RNA virus. Courtesy of the CDC.

For the first time, researchers have captured images of the formation of individual viruses, offering a real-time view into the kinetics of viral assembly. The research provides new insights into how to fight viruses and engineer self-assembling particles.

The research is published in the Proceedings of the National Academy of Sciences.

"Structural biology has been able to resolve the structure of viruses with amazing resolution, down to every atom in every protein," said Vinothan Manoharan, the Wagner Family Professor of Chemical Engineering and professor of physics at the Harvard John A. Paulson School of Engineering and Applied Sciences. "But we still didn't know how that structure assembles itself. Our technique gives the first window into how viruses assemble and reveals the kinetics and pathways in quantitative detail."

Manoharan and his team focused on single-stranded RNA viruses, the most abundant type of virus on the planet. In humans, RNA viruses are responsible for, among others, West Nile fever, gastroenteritis, hand, foot, and mouth disease, polio, and the common cold.

These viruses tend to be very simple. The virus Manoharan and his team studied, which infects E. coli bacteria, is about 30 nanometers in diameter and has one piece of RNA, with about 3600 nucleotides, and 180 identical proteins. The proteins arrange themselves into hexagons and pentagons to form a soccer-ball-like structure around the RNA, called a capsid.

How those proteins manage to form that structure is the central question in virus assembly. Until now, no one had been able to observe viral assembly in real time because viruses and their components are very small and their interactions are very weak.

To observe the viruses, the researchers used an optical technique known as interferometric scattering microscopy, in which the light scattered off an object creates a dark spot in a larger field of light. The technique doesn't reveal the virus's structure but it does reveal its size and how that size changes with time.

The researchers attached viral RNA strands to a substrate, like stems of a flower, and flowed proteins over the surface. Then, using the interferometric microscope, they watched as dark spots appeared and grew steadily darker until they were the size of full-grown viruses. By recording intensities of those growing spots, the researchers could actually determine how many proteins were attaching to each RNA strand over time.

"One thing we noticed immediately is that the intensity of all the spots started low and then shot up to the intensity of a full virus," Manoharan said. "That shooting up happened at different times. Some capsids assembled in under a minute, some took two or three, and some took more than five. But once they started assembling, they didn't backtrack. They grew and grew and then they were done."

The researchers compared these observations to previous results from simulations, which predicted two types of assembly pathways. In one type of pathway, the proteins first stick randomly to the RNA and then rearrange themselves into a capsid. In the second, a critical mass of proteins, called a nucleus, must form before the capsid can grow.

The experimental results matched the second pathway and ruled out the first. The nucleus forms at different times for different viruses but once it does, the virus grows quickly and doesn't stop until it reaches its right size.

The researchers also noticed that the viruses tended to misassemble more often when there were more proteins flowing over the substrate.

"Viruses that assemble in this way have to balance the formation of nuclei with the growth of the capsid. If nuclei form too quickly, complete capsids can't grow. That observation might give us some insights into how to derail the assembly of pathogenic viruses," said Manoharan.

How the individual proteins come together to form the nucleus is still an open question but now that experimentalists have identified the pathway, researchers can develop new models that explore assembly within that pathway. Those models might also be useful for designing nanomaterials that assemble themselves.

"This is a good example of quantitative biology, in that we have experimental results that can be described by a mathematical model," said Manoharan.

The research was co-authored by Rees F. Garmann and Aaron M. Goldfain. It was supported in part by the National Science Foundation, the National Institutes of Health, and the Simons Foundation.