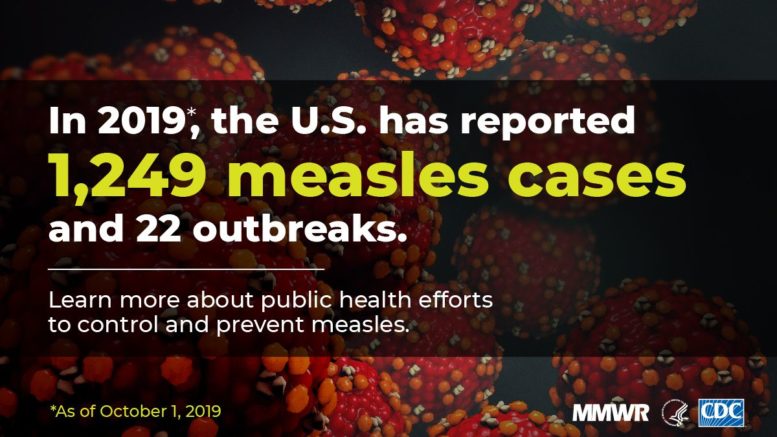 Researchers are reporting in the latest MMWR that during Jan. 1, 2019 through Oct. 1, 2019, a total of 1,249 measles cases and 22 measles outbreaks were reported in the United States. This represents the most U.S. cases reported in a single year since 1992, and the second highest number of reported outbreaks annually since measles was declared eliminated* in the United States in 2000.

Measles is an acute febrile rash illness with an attack rate of approximately 90% in susceptible household contacts (3). Domestic outbreaks can occur when travelers contract measles outside the United States and subsequently transmit infection to unvaccinated persons they expose in the United States.

Among the 1,249 measles cases reported in 2019, 1,163 (93%) were associated with the 22 outbreaks, 1,107 (89%) were in patients who were unvaccinated or had an unknown vaccination status, and 119 (10%) measles patients were hospitalized. Closely related outbreaks in New York City (NYC) and New York State (NYS; excluding NYC), with ongoing transmission for nearly 1 year in large and close-knit Orthodox Jewish communities, accounted for 934 (75%) cases during 2019 and threatened the elimination status of measles in the United States.

Robust responses in NYC and NYS were effective in controlling transmission before the 1-year mark; however, continued vigilance for additional cases within these communities is essential to determine whether elimination has been sustained. Collaboration between public health authorities and undervaccinated communities is important for preventing outbreaks and limiting transmission.

The combination of maintenance of high national vaccination coverage with measles, mumps, and rubella vaccine (MMR) and rapid implementation of measles control measures remains the cornerstone for preventing widespread measles transmission. Measles cases are classified according to the Council of State and Territorial Epidemiologists’ case definition for measles. Cases are considered internationally imported if at least part of the exposure period (7–21 days before rash onset) occurred outside the United States and rash occurred within 21 days of entry into the United States, with no known exposure to measles in the United States during the exposure period. An outbreak of measles is defined as a chain of transmission of three or more cases linked in time and place as determined by local and state health department investigations.