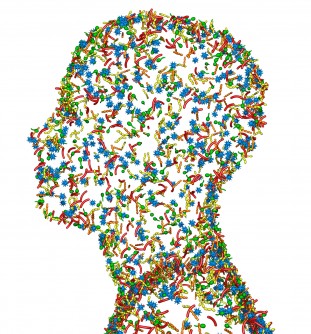 Asthma and chronic rhinosinusitis (CRS)—sinus inflammation that lasts for at least three months—are serious and costly diseases, and both are on the rise. According to the American Academy of Allergy, Asthma and Immunology, CRS affects up to 16 percent of the U.S. adult population and eats up a staggering 5 percent of the country’s health care budget each year. Asthma, which involves inflammation of the lower airway, affects about 8 percent of the population and costs about $56 billion annually in health care and lost time, according to the Centers for Disease Control and Prevention.

The National Institutes of Health (NIH) recently awarded two Northern Arizona University researchers $468,472 to study how microbiota in the upper and lower airways drive inflammation in patients with these respiratory tract diseases.

The human body is home to trillions of microbes, referred to as the microbiome. Most research to date on the microbiome has focused on the intestinal tract. But according to Emily Cope, assistant professor of biology and assistant director of NAU’s Pathogen and Microbiome Institute (PMI), the airways also have a diverse microbial community. She and co-principal investigator Greg Caporaso, associate professor of biology and director of the Center for Applied Microbiome Science in PMI, will lead a three-year project to determine whether microbes in the sinus cavity and lungs trigger inflammation in patients with both CRS and asthma.

While inflammation is a normal and necessary part of the healing process, sometimes it results from a misguided immune response to a perceived but nonexistent threat. In other words, the immune system attacks the body’s own cells, thinking they are intruders, which can lead to CRS and asthma.

“Currently, these diseases are treated separately, but people with CRS often have asthma, leading us to believe there might be a common cause,” Cope said. “Surprisingly, the sinus and lung microbiome of CRS and asthma patients have not been studied in tandem.”

Having either condition can be miserable, and suffering from both can be debilitating. According to Cope, people with CRS report worse quality of life than people with chronic back pain, diabetes or angina. If the team can figure out whether the microbiome of the upper and lower airways is what links CRS and asthma, more effective treatment options could become available.

“We know that microbial metabolites often interact with the immune system. This study will help us figure out whether these metabolites trigger an inflammatory response,” she said. “If we figure out that the diseases are microbial in origin, that can pave the way for microbiome-based therapeutics. Ideally, treatments could target the upper airway (sinus) microbiome—which is much easier to reach than the lungs and much more tolerable for the patient—to ease both conditions.”

Funded through the NIH grant, Cope, Caporaso and several students will study the sinus and lung microbiomes in healthy subjects and CRS patients with and without asthma by using next-generation sequencing and metabolomic analysis. The team will also study the immune responses in each airway site to determine whether a correlation exists between changes in the microbiome and inflammation. To understand how the altered respiratory microbiota contribute to inflammation, they will conduct laboratory experiments that expose immune cells to microbial metabolites from CRS patients with asthma.

“We’re collaborating with clinicians at the University of California San Francisco who are collecting samples during surgical procedures in the form of sinus and lung swabs,” Cope said. “All the samples will be analyzed in our lab at NAU.”

One graduate student and at least three undergraduates will be involved in all phases of the project, including traveling to UCSF to shadow the clinicians and observe sample collection. Cope will mentor students in the laboratory, and Caporaso will guide students in bioinformatics analysis of the microbiome data.

“The students will contribute from beginning to end,” Cope said. “Their involvement includes conducting lab work, observing clinical and surgical procedures, analyzing data and publication of our findings. The multiple layers of this project will stimulate our students to consider careers in biomedical science and give them a good foundation for what to expect.”

Cope’s lab focuses on human microbiota (bacteria, fungi and viruses that inhabit a body site) in chronic airway diseases. CRS is a primary focus at her laboratory.