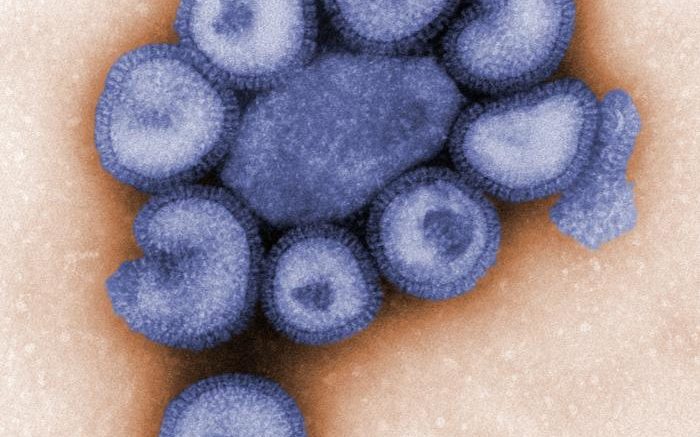 This colorized negative-stained transmission electron microscopic (TEM) image depicts the ultrastructural details of a number of Influenza virus particles, or “virions”. A member of the taxonomic family Orthomyxoviridae, the influenza virus is a single-stranded RNA organism. Courtesy of CDC/Dr. F.A. Murphy

The antiviral drug, baloxavir (tradename Xofluza), is the first treatment for influenza with a new mode of "action" to be licensed in nearly 20 years. It was approved in Australia in February 2020 by the Therapeutic Goods Administration (TGA) and has been used to treat influenza in Japan, the U.S., and several other countries since 2018.

Researchers at the WHO Collaborating Centre for Reference and Research on Influenza at the Peter Doherty Institute for Infection and Immunity (Doherty Institute -- a joint venture between the University of Melbourne and Royal Melbourne Hospital) and Imperial College London tested whether baloxavir could prevent the spread of influenza virus in an animal model in conditions that mimicked household settings, including direct and indirect contact. They also compared the treatment to oseltamivir (tradename Tamiflu), a widely prescribed influenza antiviral.

First author Leo Yi Yang Lee, a medical scientist at the WHO Collaborating Centre for Reference and Research on Influenza, believes the results are an important breakthrough in our understanding of managing the influenza virus.

"Our research provides evidence that baloxavir can have a dramatic dual effect: a single dose reduces the length of influenza illness, while simultaneously reducing the chance of passing it on to others," Lee said.

"This is very important, because current antiviral drugs only treat influenza illness in the infected patient. If you want to reduce the spread of influenza to others, people in close contact need to take antiviral drugs themselves to stave off infection."

Senior author professor Wendy Barclay, head of the Department of Infectious Disease at Imperial College London, said if the results of the study were replicated in humans, the discovery could be a game changer in stemming outbreaks of influenza, particularly among vulnerable groups.

"We know that influenza can have serious and devastating outcomes for people with compromised immune systems, such as those in care facilities and hospitals, where finding more ways to reduce transmission is essential," Barclay said.

A first-of-its-kind clinical trial is currently underway to test the effectiveness of baloxavir in reducing transmission among human household contacts by treating individuals infected with influenza and monitoring for infection in household members.