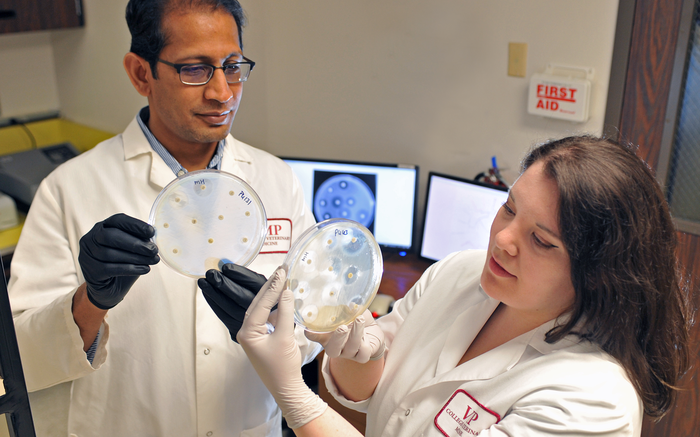 One type of the salmonella bacteria is much more likely to cause disease and fend off frontline antibiotics when acquired in Europe, Asia, and parts of Africa rather than domestically in the United States.

Washington State University researchers aren’t sure yet why salmonella Kentucky isolates from certain parts of the globe are antibiotic resistant while others aren’t, but their findings are a key step toward better understanding and treatment.

“Quite frankly, I think we’ve just gotten lucky this drug-resistant type hasn’t popped up in the U.S. yet,” said Rachel Soltys, a graduate student and first author of a paper on the research in the Journal of Frontiers and Sustainable Food Systems.

The study was conducted in the laboratory of Devendra Shah, an associate professor and the Caroline Engle Distinguished Professor in Research on Infectious Diseases. Shah is part of the university’s large disease research effort and is housed in WSU’s Department of Veterinary Microbiology and Pathology.

Researchers in the Shah lab looked specifically at salmonella Kentucky. Just like other salmonella types, the bacteria thrive in the gastrointestinal tracts of food animals such as chickens and cattle, and are known to cause diarrhea, abdominal pain, and fever in humans.

The researchers found that more than 60% of Washingtonians with a confirmed salmonella Kentucky infection while abroad from 2004 to 2014 were resistant to fluoroquinolones, a group of frontline antibiotics used to treat salmonella infection.

While the lab also collected salmonella Kentucky isolates from domestically raised food animals in the U.S. such as chickens, none showed resistance to this group of antibiotics.

To trace the origin of antibiotic resistance in strains, Soltys and Shah analyzed 15 fluoroquinolone-resistant clinical samples of salmonella Kentucky collected by the Washington State Department of Health.

In collaboration with the state health department, 11 of those cases were traced directly to international travel to the Middle East and countries such as Tanzania, Ethiopia, Ivory Coast, Morocco, Egypt, and India.

To back up their findings, another 140 salmonella Kentucky samples collected from chickens in the northwestern U.S. and a few from the laboratory of Jean Guard, an agriculture research scientist at the U.S. National Poultry Research Center at the U.S. Department of Agriculture, were compared with more than 400 publicly available genome sequences of salmonella Kentucky from various parts of the world.

“When we compared our salmonella Kentucky sequences to the international isolates, it corroborated with what we had learned from the Washington State Department of Health epidemiology data and confirmed that the patients had picked up infection when they were traveling,” Soltys said.

The research builds off work from 2016, when second-year veterinary student Carson Sakamoto found most salmonella Kentucky strains isolated from human patients in Washington state were highly resistant to frontline antibiotics.

However, Shah said if this fluoroquinolone-resistant salmonella Kentucky from across the globe were to become endemic in the U.S., reported cases would likely increase, and those experiencing symptoms severe enough to warrant a doctor’s visit would likely be prescribed drugs that would not work.

“One, you’re likely not going to recover with antibiotics. Two, you’re going to disturb your normal bacteria in your body, and it can make your infection worse,” Shah said.

Currently, the Centers for Disease Control and Prevention estimate salmonella causes 1.35 million infections, 26,500 hospitalizations and 420 deaths every year in the U.S.