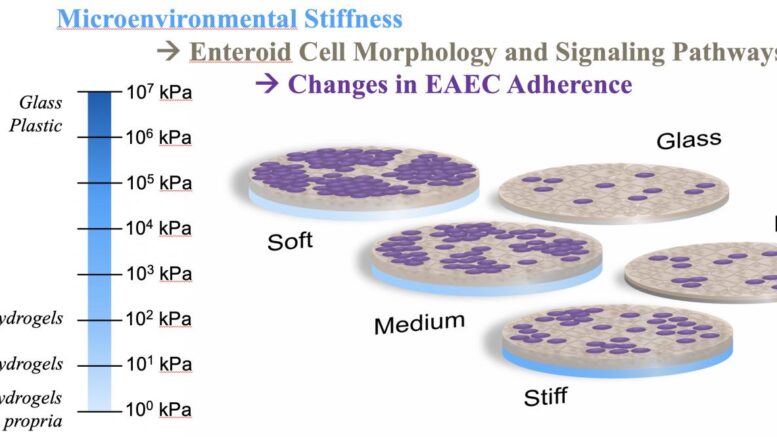 Rice University bioengineers have developed hydrogels of various stiffness to see if they are more hospitable to intestinal cells and bacteria in lab experiments. The hydrogels proved far better at supporting cultures than traditional glass and plastic slides. Courtesy of Rice University/Baylor College of Medicine

Rice University bioengineers and Baylor College of Medicine scientists looking for a better way to mimic intestinal infections that cause diarrhea and other diseases have built and tested a set of hydrogel-based platforms to see if they could make both transplanted cells and bacteria comfy.

As a mechanical model of intestinal environments, the lab's soft, medium and hard polyethylene glycol (PEG) hydrogels were far more welcoming to the cells that normally line the gut than the glass and plastic usually used by laboratories. These cells can then host bacteria like Escherichia coli that are sometimes pathogenic. The ability to study their dynamics under realistic conditions can help scientists find treatments for the maladies they cause.

The researchers found strong correlation between the stiffness of hydrogels, which mimic intestinal mucus, and how well a diarrhea-causing strain of E. coli adhered to and aggregated atop the epithelial cells that normally line the intestines. They reported that softer hydrogels promoted "significantly greater bacterial adhesion," which they attribute to mucus and other extracellular matrix components expressed by the cells.

The study led by bioengineer Jane Grande-Allen of Rice's Brown School of Engineering and Anthony Maresso at Baylor, which appears in Acta Biomaterialia, proved the gels' value in experiments involving the soft interface between organs and microbial or bacterial pathogens.

The Estes lab at Baylor built its model cultures using enteroids, constructs of intestinal cell cultures that scientists use to understand how epithelial cells respond to infectious invaders. Enteroids can incorporate a variety of cells found in the gut, but before Rice's hydrogels, they were grown on platforms that did not easily mimic the squishy tissues in host bodies.

"Tissue culture plastic is the standard for growing cells, but it's a really artificial environment because it's so rigid," Grande-Allen said. "It's hard plastic, like a glass slide. Certain cells grow just fine on tissue culture plastic, but they're not consistently easy to infect that way.

"This is the case with the cells in the jejunum, where most nutrient absorption happens in the small intestine," she said. "Our collaborators obtain human intestinal tissues from biopsies and bariatric surgeries to make enteroids, but the enteroids derived from jejunal cells had been difficult to infect with this pathogenic E. coli."

In Grande-Allen's lab, enteroid cells were grown on top of the hydrogel substrates. After a time, the researchers in Maresso's lab added bacteria and found that the enteric E. coli clustered easily on the intestinal cells grown on the medium and soft gels, but not on glass slides or stiff hydrogels.

All of the hydrogel-cultured enteroids showed significant enrichment of gene and signaling pathways related to epithelial differentiation, cell junctions and adhesions, extracellular matrix and mucins compared to those cultured on rigid surfaces.

The Rice lab reported its successful development of hydrogels for enteroid use in a previous paper with the Baylor researchers. "Getting the cells to adhere and spread on the hydrogels was tricky, which is why we wrote the methods paper," Grande-Allen said.

"But with that coating approach established, the hydrogel underneath could have a range of different stiffnesses," she said. "That was the variable in the new paper, and we were floored to find the effect that it had on bacterial adhesion.

"In general, stiffness and its effect on bacteria is rather understudied," Grande-Allen said. "Others have reported that bacteria grown directly on hydrogels prefer stiffer gels, and that finding will help to study biofilms. But here, our focus was trying to mimic the infectious disease process that actually happens in the gut, so we needed to involve the epithelial cells."

Grande-Allen said the hydrogels will be used to study other types of diarrhea-causing bacteria, including patient-specific cultivates, but in the near term said her lab will look at the combined effect of stiffness and shear stress on bacterial adhesion to enteroids.