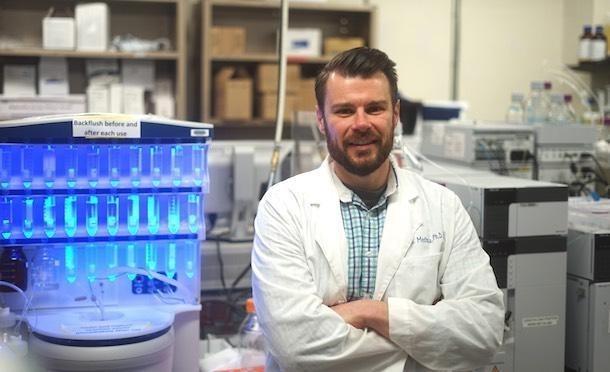 A research team led by Scott Medina, assistant professor of biomedical engineering at Penn State, has developed a small protein that can target a specific pathogen to attach to and destroy without harming good bacteria. Courtesy of The Medina Group/Penn State

Drug-resistant bacteria could lead to more deaths than cancer by 2050, according to a report commissioned by the United Kingdom in 2014 and jointly supported by the U.K. government and the Wellcome Trust. In an effort to reduce the potential infection-caused 10 million deaths worldwide, Penn State researcher Scott Medina has developed a peptide, or small protein, that can target a specific pathogen without damaging the good bacteria that bolsters the immune system.

Medina, an assistant professor of biomedical engineering, led the team who published its results Jan. 4 in Nature Biomedical Engineering.

"One of the best protective mechanisms we have to prevent infection are beneficial bacteria that inhabit our bodies, known as commensals," Medina said. "For example, we often avoid food poisoning because our guts are already populated by helpful bacteria. There's no room for the pathogen to take hold and colonize. If you wipe out the good bacteria, opportunistic pathogens can take advantage and cause infections."

Led by biomedical engineering doctoral student Andrew W. Simonson, first author on the paper, the team set out to develop a peptide that could eradicate the pathogen that causes tuberculosis (TB), one of the top 10 causes of death worldwide, without harming surrounding good bacteria.

"There are great control strategies and treatments in place for tuberculosis, making it largely preventable and treatable, but drug-resistant TB is an emerging threat that is on track to becoming a serious global health problem," Medina said. "It's a scary prospect."

To develop a pathogen-specific antibacterial against TB, the researchers looked to the pathogen itself. The TB pathogen is wrapped in a thick envelope that is difficult to penetrate, especially compared to other bacteria.

"The envelope has pores, though -- channels through which the pathogen takes in nutrients and metabolites," Medina said. "We asked if we could mimic these channels to design antibacterials that would create holes in the bacterial envelope, and ultimately kill the pathogen."

The researchers made a peptide that seems to disrupt the protective outer coating of the pathogen, making the TB bacteria susceptible to antibiotics and die, but it does not interact with the good bacteria. Medina said they are currently studying the exact mechanism by which the peptide attacks the TB pathogen, but they suspect it has something to do with a fatty acid that lives on the pathogen's surface.

"There aren't many biochemical differences between the targeted pathogen and good bacteria, except for this surface lipid," Medina said. "We think the interaction of our peptide with this fatty acid is one of the things driving this preferential interaction."

He also pointed to the bacteria's thin carbohydrate region. In other types of bacteria, the carbohydrates form a thick defensive barrier that appears to insulate the bacteria against the peptide.

"It's not entirely clear why this works, but it's working on TB," Medina said. "There's a 10-fold improvement on the effectiveness of antibiotics on this pathogen relative to the other good bacteria."

Next, the researchers plan to investigate how to administer the peptide to treat TB in a full model system. Peptides tend to break down when injected, Medina said, so his team is working to develop an aerosol that would allow a person to inhale the peptides directly to the infected lung tissue.

"Once we understand why this peptide targets TB, and how to administer the peptide as a viable therapeutic, we can use this platform to design antibacterials toward other lung pathogens," Medina said.

The National Institutes of Health supported this work.

Be the first to comment on "Resist the Resistance: Fighting the Good Fight Against Bacteria"