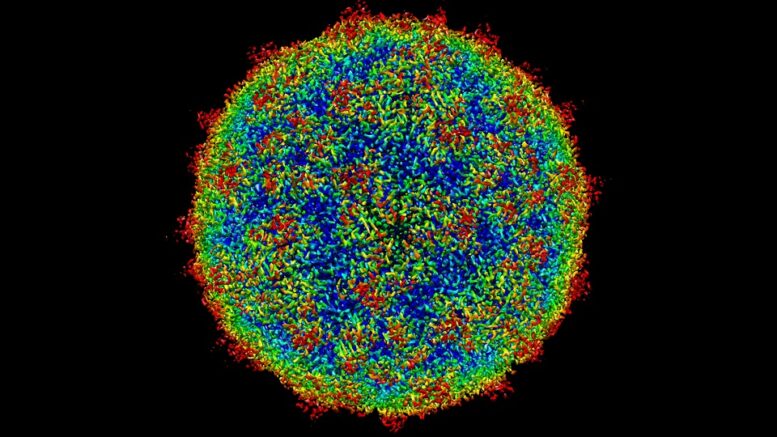 Exposure to the rhinovirus, the most frequent cause of the common cold, can protect against infection by the virus which causes COVID-19, Yale researchers have found.

In a new study, the researchers found that the common respiratory virus jump-starts the activity of interferon-stimulated genes, early-response molecules in the immune system which can halt replication of the SARS-CoV-2 virus within airway tissues infected with the cold.

Triggering these defenses early in the course of COVID-19 infection holds promise to prevent or treat the infection, said Ellen Foxman, assistant professor of laboratory medicine and immunobiology at the Yale School of Medicine and senior author of the study. One way to do this is by treating patients with interferons, an immune system protein which is also available as a drug.

"But it all depends upon the timing," Foxman said.

The results were published June 15th in the Journal of Experimental Medicine.

Previous work showed that at the later stages of COVID-19, high interferon levels correlate with worse disease and may fuel overactive immune responses. But recent genetic studies show that interferon-stimulated genes can also be protective in cases of COVID-19 infection.

Foxman's lab wanted to study this defense system early in the course of COVID-19 infection.

Since earlier studies by Foxman's lab showed that common cold viruses may protect against influenza, they decided to study whether rhinoviruses would have the same beneficial impact against the COVID-19 virus. For the study, her team infected lab-grown human airway tissue with SARS-CoV-2 and found that for the first three days, viral load in the tissue doubled about every six hours. However, replication of the COVID-19 virus was completely stopped in tissue which had been exposed to rhinovirus. If antiviral defenses were blocked, the SARS-CoV-2 could replicate in airway tissue previously exposed to rhinovirus.

The same defenses slowed down SARS-CoV-2 infection even without rhinovirus, but only if the infectious dose was low, suggesting that the viral load at the time of exposure makes a difference in whether the body can effectively fight the infection.

The researchers also studied nasal swab samples from patients diagnosed close to the start of infection. They found evidence of rapid growth of SARS-CoV-2 in the first few days of infection, followed by activation of the body's defenses. According to their findings, the virus typically increased rapidly for the first few days of infection, before host defenses kicked in, doubling about every six hours as seen in the lab; in some patients the virus grew even faster.

"There appears to be a viral sweet spot at the beginning of COVID-19, during which the virus replicates exponentially before it triggers a strong defense response," Foxman said.

Interferon treatment holds promise but it could be tricky, she said, because it would be mostly effective in the days immediately after infection, when many people exhibit no symptoms. In theory, interferon treatment could be used prophylactically in people at high risk who have been in close contact with others diagnosed with COVID-19. Trials of interferon in COVID-19 are underway, and so far show a possible benefit early in infection, but not when given later.

These findings may help explain why at times of year when colds are common, rates of infections with other viruses such as influenza tend to be lower, Foxman said. There are concerns that as social distancing measures ease, common cold and flu viruses -- which have been dormant over the past year -- will come back in greater force. Interference among respiratory viruses could be a mitigating factor, creating an "upper limit" on the degree to which respiratory viruses co-circulate, she said.

"There are hidden interactions between viruses that we don't quite understand, and these findings are a piece of the puzzle we are just now looking at," Foxman said.

Nagarjuna R. Cheemarla, a postdoctoral associate in Foxman's lab, was first author of the study, which was carried out by a team of Yale scientists in the Departments of Laboratory Medicine, Immunobiology, and Genetics.