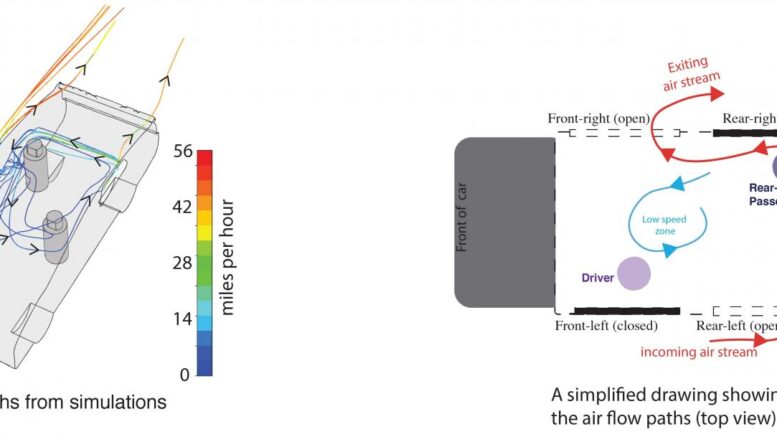 At left is a computer simulation, at right a graphic illustration of the same situation. Mathai and colleagues suggest that if you cannot open all the windows, this may be a good seating arrangement and window adjustment scenario. Courtesy of UMass Amherst/Mathai lab

If you find yourself in a car with someone outside your household during the COVID-19 pandemic, your instinct may be to roll down your window, whether you're the driver or a back-seat passenger. But a University of Massachusetts Amherst physicist has shown in a new study that opening the car window closest to you isn't always the best option to protect yourself from coronavirus or any airborne infection.

In a paper published Dec. 4 in the journal Science Advances, researchers have revealed certain surprising ways in which the airflow patterns within a car's interior could either heighten or suppress the risk of airborne infection during everyday commutes.

"One might imagine that people instinctively open windows right beside them while riding with a co-passenger during the pandemic. That may not be optimal - though it's better than opening no window," says lead author Varghese Mathai, an assistant professor of physics at UMass Amherst.

He explains, "We designed this research with ride-sharing in mind, from a traditional taxi or Uber and Lyft to noncommercial commutes, assuming a driver and one passenger, seated in the back on the passenger side to provide the best possible spacing between the occupants."

Briefly, the research suggests that opening the windows farthest from the driver and the back-seat passenger might offer some benefits. The findings may provide COVID-19 risk reduction measures for the hundreds of millions of people driving in passenger cars or taking a taxi worldwide.

The most and least risky scenarios for airborne pathogen transmission in a car are understood by scientists: Opening all the windows, along with bringing in fresh air through the vents, is thought to create the best in-cabin environment to reduce the risk of transmission by increasing ventilation. Keeping all the windows up and using only the recirculating air mode is likely the riskiest option.

Realizing the impracticalities of keeping all car windows open in winter or rainy weather, Mathai wanted to examine what happens to aerosolized particles exhaled by occupants inside the car's cabin under various configurations of open and closed windows. "These tiny, potentially pathogenic particles remain in the air for long durations without settling down, so if they are not flushed out of the cabin, they can build up over time posing an increased risk of infection," he explains.

Generally, the air flowing around a car creates a lower pressure on the front windows as compared to the back windows, Mathai says. "We had this idea that if you open the rear and front windows on opposite sides, then you might create an air current from the rear to the front of the cabin, and crossing through the middle."

The study was conducted with colleagues Asimanshu Das, Jeffrey Bailey and Kenneth Breuer at Brown University, where Mathai worked previously and started the study. The researchers hypothesized that if all windows can't be left open, opening the front window on the right side and the rear window on the left side might best protect the driver and passenger from the hundreds of aerosol particles released in every human breath.

"To our surprise, the simulations showed an air current that acts like a barrier between the driver and the passenger," says Mathai, who likened this phenomenon to the air curtain created by a draft blown down vertically at some supermarket entrances, which prevents outdoor air from mixing with indoor air, even if the entrance door is open.

"While these measures are no substitute for wearing a face mask while inside a car, they can help reduce the pathogen load inside the very confined space of a car cabin," he points out.

Like many other researchers during the pandemic, Mathai -- an experimental physicist -- decided to shift his focus toward computer simulations while working from home. He later backed up his findings using smoke visualization and field tests that identified low-speed and high-speed zones inside the car.

The research describes the driver-to-passenger and passenger-to-driver transmission for different ventilation options, and used passive scalar transport as a proxy for infectious particles. Heat maps illustrate the scalar concentration fields originating from either the driver or passenger.

The researchers used a simplified, time-averaged model for the turbulent air flow, and study implications are limited to airborne mode of transmission, the authors stress. The computer model was based roughly on the exterior of a Toyota Prius driven at around 50 mph and the field tests of smoke and flow wand were recorded in the cabin of a Kia Optima.

Be the first to comment on "Riding in a Car in the Pandemic: Which Windows to Open?"