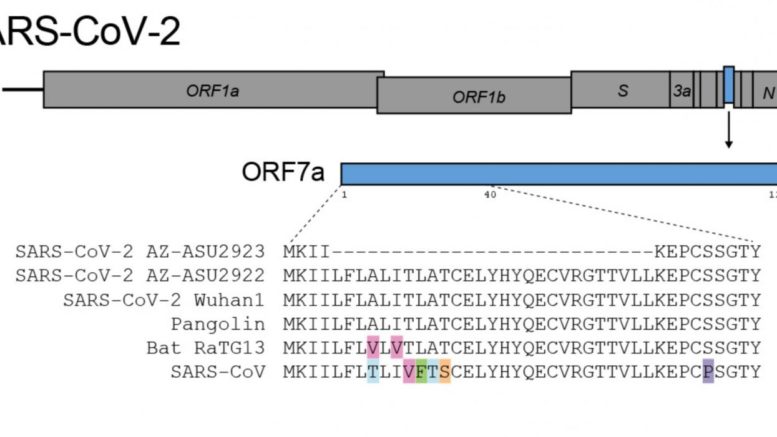 As the coronavirus pandemic has swept across the U.S., in addition to tracking the number of COVID-19 daily cases, there is a worldwide scientific community engaged in tracking the SARS-CoV-2 virus itself.

Efrem Lim leads a team at ASU that looks at how the virus may be spreading, mutating and adapting over time.

To trace the trail of the virus worldwide, Lim's team is using a new technology called next-generation sequencing at ASU's Genomics Facility, to rapidly read through all 30,000 chemical letters of the SARS-CoV-2 genetic code, called a genome.

Each sequence is deposited into a worldwide gene bank, run by a nonprofit scientific organization called GISAID. To date, over 16,000 SARS-CoV-2 sequences have been deposited GISAID's EpiCoVTM Database. The sequence data shows that SARS-CoV-2 originated a single source from Wuhan, China, while many of the first Arizona cases analyzed showed travel from Europe as the most likely source.

Now, using a pool of 382 nasal swab samples obtained from possible COVID-19 cases in Arizona, Lim's team has identified a SARS-CoV-2 mutation that had never been found before----where 81 of the letters have vanished, permanently deleted from the genome.

The study was published in the online version of the Journal of Virology.

Lim says as soon as he made the manuscript data available on a preprint server medRxiv, it has attracted worldwide interest from the scientific community, including the World Health Organization.

"One of the reasons why this mutation is of interest is because it mirrors a large deletion that arose in the 2003 SARS outbreak," said Lim, an assistant professor at ASU's Biodesign Institute. During the middle and late phases of the SARS epidemic, SARS-CoV accumulated mutations that attenuated the virus. Scientists believe that a weakened virus that causes less severe disease may have a selective advantage if it is able to spread efficiently through populations by people who are infected unknowingly.

The ASU virology team had been setup to perform research on seasonal flu viruses, but when the 3rd case of COVID-19 was found in an Arizona individual on January 26, 2020, they knew they had all technical and scientific prowess to rapidly pivot to examining the spread of SARS-CoV-2.

"This was the scientific opportunity of a lifetime for ASU to be able to contribute to understand how this virus is spreading in our community," said Lim. "As a team, we knew we could make a significant difference."

All the positive cases show that the SARS-CoV-2 viral genomes were different from each other, meaning they were independent from each other. This indicates that the new cases were not linked to the first Arizona case in January, but the result of recent travel from different locations.

In the case of the 81-base pair mutation, because it has never been found before in the GISAID database, it could also provide a clue into how the virus makes people sick. It could also form a new starting point for other scientists to develop antiviral drugs or formulate new vaccines.

The ASU team is now hard at work performing further experiments to understand the functional consequences of the viral mutation. The viral protein is thought to help SARS-CoV-2 evade human defenses, eventually killing the cell. This frees up the virus to infect other cells in a cascading chain reaction that can quickly cause the virus to make copies of itself throughout the body, eventually causing the serious COVID-19 symptoms 8-14 days after the initial infection.

Lim points out that only 16,000 SARS-CoV-2 genomes have been sequenced to date, which is less than 0.5% of the strains circulating. There are currently more than 3.5 million confirmed COVID-19 cases worldwide.

Lim's group has teamed up with TGen, UA and Northern Arizona University to continue tracking different genetic strains of the new coronavirus. Together, the newly formed Arizona COVID-19 Genomics Union (ACGU) hopes to use big data analysis and genetic mapping to give Arizona health care providers and public policy makers an edge in fighting the growing pandemic.

Be the first to comment on "Scientific Team Finds New, Unique Mutation in Coronavirus Study"