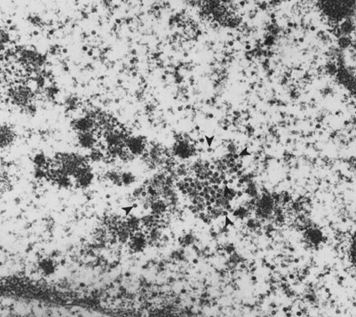 Hospitals meticulously clean the non-disposable medical equipment they repeatedly use. Equipment that cannot be heat-sterilized must be cleaned with powerful disinfectants. Michelle Ozbun, PhD, an international expert on viruses, wanted to know how effective those disinfectants really are.

Ozbun and her team developed a way to measure how many infectious human papillomavirus particles are left on a surface after it has been disinfected. They found that disinfectants approved for use on medical devices work well, and they recently published their work online in The Lancet journal EBioMedicine.

The capsid is the outer shell of a virus particle. It is made of viral proteins and encloses the virus’s genetic material, which encodes those proteins. Some viruses, called enveloped viruses, have a layer of fat-like molecules covering the viral proteins.

“Coronavirus and HIV and herpesvirus are all enveloped viruses,” Ozbun says. “They’re much more susceptible to drying out on a surface. And if they dry out, they’re not infectious.”

Viruses like HPV, poliovirus and norovirus have capsids made of just proteins, which means they can remain on surfaces for a long time without becoming inactivated, Ozbun says. “And so,” she says, “they’re much harder to inactivate by disinfectants as well.”

Because HPV does not kill cells, the only way to detect its presence — until now — has been to take a sample of cells, grind them up and search the genetic material for the virus’ genes.

“When people in the field look to see if people have HPV,” Ozbun says, “they’re really just detecting the viral genomes that are there. They don’t know [whether] these viral genomes are packaged inside the capsid.” And once the cells have been ground up, counting the number of intact HPV particles becomes impossible.

Ozbun needed more sensitive methods, so she created them.

Ozbun’s images show intact cells with viral RNA inside. Using sophisticated microscopic techniques developed at the UNM Comprehensive Cancer Center, she and her team are able to count how many cells are infected, allowing them to calculate how many virus particles were present.

Using their images and counting methods, Ozbun and her team were able to show that commonly used disinfectants reduce the number of viral particles by at least 10,000 times. They showed that the disinfectants had similar results regardless of the viral source. And they showed that their methods were sensitive over the range of particles that most hospitals and doctors’ offices normally encounter.

Her new method, says Ozbun, “is an important way of differentiating how much nucleic acid is there, versus what’s really infectious. This is the only way that we can tell the number of infectious particles.”

Ozbun explains further that many cleaning procedures call for equipment to be washed before being disinfected. Washing gets rid of many infectious particles before the disinfectant is used.

The result, she says, is that hospitals and doctors’ offices “have an even higher level of confidence that [they’re] not going to expose patients to virus that’s left over from someone else.”