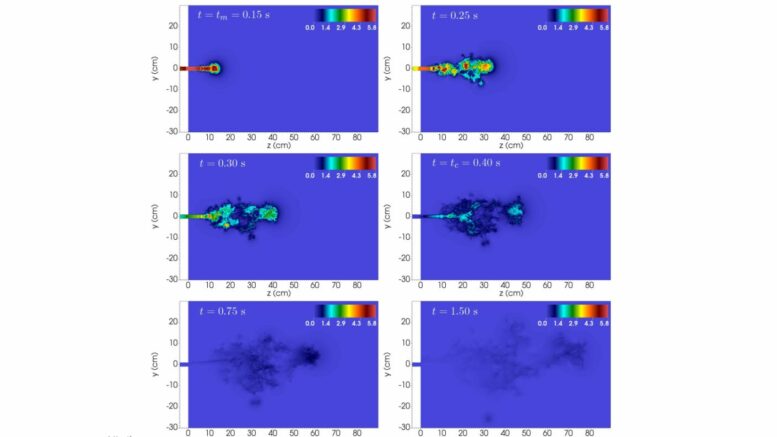 From left to right and from top to bottom, the panels show the magnitude field for the velocity of the air generated by a sneeze. The expiration of air reaches maximum speed after 0.15 seconds and finishes at 0.40 seconds. The colors show the speed in meters per second. Courtesy of URV

By the beginning of April 2021, the number of people infected during the COVID-19 pandemic had risen to more than 130 million people of whom more than 2.8 million died. The SARS-CoV-2 virus responsible for COVID-19 is transmitted particularly by droplets or aerosols emitted when an infected person speaks, sneezes or coughs. This is how the viruses and other pathogens spread through the environment and transmit infectious diseases when they are inhaled by someone else.

The capacity of these particles to remain suspended in the air and to spread in the environment depends largely on the size and nature of the air flow generated by the expiration of air. As with other airborne infectious diseases such as tuberculosis, common flu or measles, the role played by fluid dynamics is key to predicting the risk of infection by inhaling these particles in suspension.

In a coughing event that lasts for 0.4 seconds and has a maximum exhaled air speed of 4.8 m/s, the flow first generates a turbulent stream of air that is hotter and more humid than that of the environment. Once the expiration is over, the stream turns into a puff of air that rises because of flotation and its lack of weight while it dissipates.

The particles transported by this flow form clouds, the trajectories of which depend on their size. The dynamics of the largest particles are governed by gravity and describe parabolas with a clear horizontal limit. Despite their limited ability to remain in suspension and the limited horizontal scope, the viral load can be high because they are large (diameters larger than 50 microns).

In contrast, the smallest particles (with diameters shorter than 50 microns) are transported by the action of air flow. These aerosols are capable of remaining in suspension for longer times and they spread over a greater area. The largest particles remain in the air for a few seconds while the smallest can remain suspended for up to a few minutes, Even though their viral load is smaller, these aerosols can get through face masks and be moved from room to room, for example, through ventilation systems. The retention percentage of face masks decreases when the particles are smaller.

The behavior of the particle cloud depends on the size of the particles and can be complicated by the effects of evaporation, which gradually reduces the diameter of the droplets.

With the support of the Consortium of University Services of Catalonia, the research group form the URV's Department of Mechanical Engineering, led by Alexandre Fabregat and Jordi Pallarés, in conjunction with researchers from the University of Utah and the University of Illinois, has used high-performance numerical simulations to study in unprecedented detail the process of aerosol dispersion generated by a cough or a sneeze. The level of detail was so high that they needed considerable calculation power and numerous processors of a supercomputer working at the same time.

The results indicate that the plume of air produced by the expiration carries particles of less than 32 microns above the height of emission, which generates a cloud that has a great capacity to remain in suspension and be dispersed by air currents over a significant distance. The largest particles have a limited scope which is not changed by the effect of evaporation during the displacement to the ground. Assuming the habitual viral loads for infectious diseases, the results were used to draw a map of the concentration of viral particles around the infected person after they had coughed or sneezed.

This research has been published as two scientific articles in the journal Physics of Fluids with the titles "Direct numerical simulation of the turbulent flow generated during a violent expiratory event" and "Direct numerical simulation of turbulent dispersion of evaporative aerosol clouds produced by an intense expiratory event." Both articles were featured on the front cover because of their scientific impact.