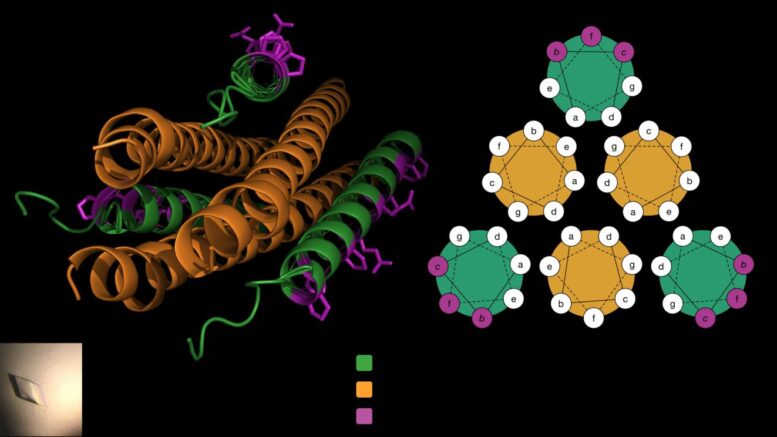 The anti-viral peptide is made up of three corkscrews (in green), which lock around the virus's fusion protein (in orange) to prevent the virus from entering cells. The Gellman lab added unique beta amino acids to the peptide (in purple) in a way that didn't interfere with this crucial interaction and made the peptide more stable. Courtesy of Victor Outlaw

By engineering a short chunk of protein, or peptide, that can prevent the attachment of human parainfluenza viruses to cells, researchers have improved a method in rodent models intended to help keep children healthy.

Human parainfluenza viruses, or HPIVs, are the leading cause of childhood respiratory infections, responsible for 30% to 40% of illnesses like croup and pneumonia. The viruses also affect the elderly and people with compromised immune systems.

To sicken people, HPIVs must latch onto cells and inject their genetic material to start making new viruses. HPIV3 is the most prevalent among these viruses. There are currently no approved vaccines or antivirals for HPIV3 infection in people.

In a study led by the Sam Gellman lab in the chemistry department at the University of Wisconsin-Madison, and the lab of Anne Moscona and Matteo Porotto at Columbia University, researchers built upon years of work on peptide treatments to generate one capable of blocking the HPIV3 attachment process.

The researchers published their findings April 7 in the Journal of the American Chemical Society.

To enter host cells, HPIVs use specialized fusion proteins that resemble three corkscrews laid side-by-side. Earlier work by the Moscona-Porotto lab showed that scientists could a partial chunk of this corkscrew protein from HPIV3, introduce this peptide to the virus, and prevent the corkscrew from driving the infection process. The peptide, itself a corkscrew, essentially zippers up with the virus's corkscrews, creating a tight bundle of six corkscrew shapes.

The new peptide persists longer in the body, making it about three times more effective at blocking infection in rodent models of disease than the original form.

The research team started by trying to engineer the original peptide to be more resistant to protein-digesting enzymes in the body, which can easily shred proteins and make them useless. So, the Gellman lab turned to unusual building blocks to create a hardier peptide.

Cells build proteins out of alpha amino acids. But chemists can create beta amino acids, which are similar but have an extra carbon atom. When peptides use these beta amino acid building blocks, they often take a different shape because of the extra atom. This can help a peptide hide from protein-digesting enzymes and survive longer.

However, the researchers also knew that if the peptide's shape changed too much as a result of these unusual building blocks, they might not lock together with HPIV's corkscrew fusion protein.

"We know which side of the peptide is binding to its protein target. So, we (knew that we) can modify only residues that are not directly involved in binding the viral protein," says Victor Outlaw, a postdoctoral researcher in the lab and one of the co-first authors of the report. In lab tests, they saw that the carefully modified peptide still bound strongly to the virus's protein.

In another improvement pioneered by the Moscona-Porotto lab, the scientists hooked the peptide up to a molecule of cholesterol. This fatty addition helps the peptide slide into the greasy cell membrane, where it can best block the virus.

As the research team hoped, when they gave the new peptide to cotton rats it lasted much longer in the lungs than the previous version did thanks to its resistance to digestion by enzymes. The peptide was delivered into the rats' noses.

To test how well the peptide worked to prevent infection, cotton rats received the new peptide before they were exposed to HPIV3. Compared to animals given no antiviral peptides, those given the improved peptide had 10 times fewer viruses in their lungs.

And compared to the peptide that was more susceptible to enzymes, the hardier peptide reduced viral load by about three times, suggesting that the new peptide's ability to avoid digestion in the body helps it better block infection.

While the approach hasn't yet been tested in humans and researchers must further refine and test the system, it does provide a new strategy for potentially preventing or treating these common infections.

The research collaboration is now looking to make second-generation peptides that last even longer in the body. They also want to test how well the modified peptide might block infection by related viruses. That additional research could move the peptide treatment closer to clinical trials.

"This was a very fortunate coming together of groups that had complementary needs and capabilities," says Gellman. "It's really been a great joint effort."