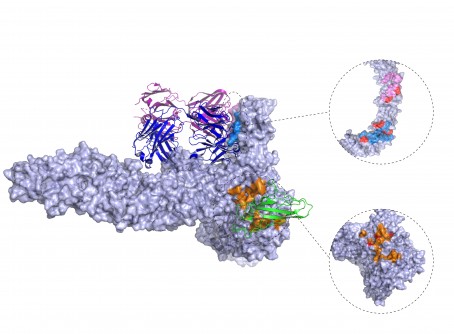 Clostridioides difficile (C. difficile) is classified as an urgent antibiotic resistance threat by the CDC. The 3-D structure shows how a key C. difficile toxin, TcdB (grey surface model), engages the human receptor CSPG4 (shown in green) for cell entry, and how an FDA-approved therapeutic antibody bezlotoxumab (shown in blue and purple) recognize two epitopes on TcdB. Some C. difficile hypervirulent strains evolve mutations in the bezlotoxumab-binding sites (blue and purple surface, while the mutated amino acids are colored red) that weaken the antibody potency. In contrast, the CSPG4-binding site on TcdB (gold surface) is highly conserved, suggesting a strategy to develop broad-spectrum therapeutics against TcdB. Courtesy of UCI School of Medicine

A new study paves the way for the development of next generation therapeutics for the prevention and treatment of Clostridioides difficile infection (CDI), the most frequent cause of healthcare-acquired gastrointestinal infections and death in developed countries.

Published today in Nature Communications, the study reveals the first 3D structure of the Clostridioides difficile toxin B (TcdB) in complex with chondroitin sulfate proteoglycan 4 (CSPG4), a human receptor. The study was co-led by senior author Rongsheng Jin, PhD, a professor in the Department of Physiology & Biophysics at the University of California, Irvine, School of Medicine, and Min Dong, PhD, an associate professor at Harvard Medical School.

“TcdB is one of two homologous C. difficile exotoxins, which are major virulence factors responsible for the spread of C. difficile infections,” explained Jin. “TcdB alone is capable of causing the full-spectrum of diseases associated with CDI in humans.”

Previous studies had identified CSPG4 as a potential receptor for TcdB, however the pathophysiological relevance and molecular details were unknown. Results from this new study reveal a unique binding site involving TcdB and CSPG4, and also show that CSPG4-binding residues are highly conserved across most TcdB variants known to date.

CDI has become the most common cause of antibiotic-associated diarrhea and gastroenteritis-associated death in developed countries, accounting for approximately 223,900 infections, 12,800 deaths, and $1 billion in healthcare costs in the United States in 2017. It is classified as one of the top five “urgent threats” by CDC. There is also growing global concern surrounding the emergence of rapidly spreading hypervirulent C. difficile strains, reminiscent of the current COVID pandemic.

“What these new findings tell us is that a rationally designed CSPG4-mimicking decoy could neutralize major TcdB variants, providing a unique therapeutic avenue for combating some of the hypervirulent C. difficile strains,” said Jin. In contrast, researchers also revealed that the therapeutic mechanism for bezlotoxumab, the only FDA approved anti-TcdB antibody, is sensitive to escaping mutations in some bacterial strains.

The current standard of care for CDI involves treatments using broad spectrum antibiotics, which often lead to frequent disease recurrence. While bezlotoxumab could reduce the recurrence rate of CDI in some patients, results from this and some earlier studies indicate it has weaker potency against some TcdB variants.

“We have designed a CSPG4-mimicking decoy based on the 3D structure we observed, which could neutralize major TcdB variants and is superior to bezlotoxumab on a major TcdB variant from a hypervirulent strain (TcdB2) in our studies. As a highly conserved cellular receptor of TcdB, a CSPG4 decoy molecule would be difficult for TcdB to escape, since any mutations that disrupt toxin binding to the decoy would also disrupt binding to its native receptors,” said Jin.

The team of researchers has also developed a family of recombinant protein therapeutics based on these new findings, as well as on an earlier discovery on how TcdB recognizes another human receptor Frizzled (FZD).

“We are now examining the therapeutic features of these novel antitoxin molecules, and we believe they could provide broad-spectrum protection and neutralization against most known TcdB variants, thus improving existing antibody therapeutics for CDI,” said Jin, whose team has filed a patent on these neutralizing molecules.

This work was supported by part by the National Institutes of Health, Niedersächsisches Vorab, Deutsche Forschungsgemeinschaft, and the Burroughs Wellcome Fund.