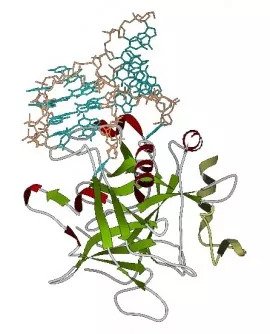 This illustration shows an aptamer binding to a protein. ISU researchers say aptamers could play a central role in developing portable and inexpensive viral testing devices. Courtesy of Marit Nilsen-Hamilton

Iowa State University scientists are working with a multi-institutional research group to develop an innovative viral testing platform that could function inexpensively in rural areas. The research has the potential to address the current pandemic and could make a big difference if similar viral outbreaks occur in the years ahead.

Marit Nilsen-Hamilton, a professor of biochemistry, biophysics and molecular biology, is the principal investigator for the research group, which includes experts in virology and engineering. The team is developing virus testing devices that could be used without the benefit of medical facilities, which would be particularly useful in rural or remote regions. The idea grew out of work Nilsen-Hamilton started through her company, Aptalogic, aimed at developing portable testing devices for the Ebola virus.

The concept depends on aptamers, which are nucleic acids that behave like antibodies in the human immune system. Aptamers can be selected in the laboratory to bind to the spike proteins of coronaviruses, creating a detection method that can be replicated and widely distributed because aptamers are more stable and more easily stored than human antibodies.

“We’re moving toward isolating an aptamer that would recognize the viral cause of COVID-19,” Nilsen-Hamilton said. “We had planned to do this research well before the pandemic, but now we’ve decided to put it on the front burner.”

Nilsen-Hamilton envisions the production of small portable devices, about the size of a phone, that people can operate without having to go to a hospital or clinic. The devices require a blood or saliva sample, which the devices analyze and report the presence of viruses or viral antibodies. Nilsen-Hamilton said this technology would be inexpensive, portable and adaptable to a wide range of viruses.

However, the technology will require at least a year before it could be widely available, Nilsen-Hamilton said, so it most likely won’t be ready in time to contribute to COVID-19 response efforts this year. But the current pandemic underscores the need for innovative approaches to make testing more widely available, she said. And the technology could be a valuable tool if there’s a recurrence of the SARS CoV-2 virus that causes COVID-19, or if outbreaks of different viruses occur in the future.

In addition to detecting the virus, the technology could also detect viral antibodies. Nilsen-Hamilton said this is crucial information because it would allow patients to know if they’d been exposed to a particular virus in the past and are now most likely immune.

“If we had a test that could tell us if we have the virus antibodies, then you know if you’ve had the virus and are no longer susceptible,” she said. “You could then continue to do some of the everyday activities that are shut down right now without worrying about contracting the virus.”

In addition to Nilsen-Hamilton, other research collaborators include Wendy Maury, a University of Iowa virologist; and Pranav Shrotriya, a professor of mechanical engineering at Iowa State. Soma Banerjee of Aptalogic leads the effort to select the aptamers.