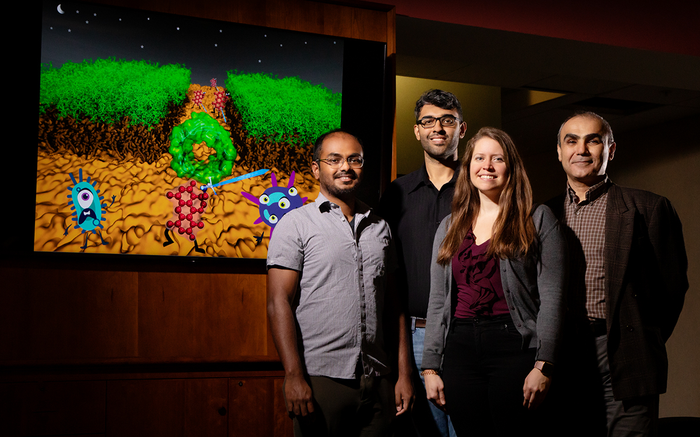 The research team, including, from left, Nandan Haloi, Archit Kumar Vasan, Emily Geddes and Emad Tajkhorshid, invented and tested a new method for determining how chemical compounds interact with proteins in cells. Their approach offers atomic-level insight into the chemical properties that allow some antibiotics to pass through pores in the cell membranes of Gram-negative bacteria. Courtesy of L. Brian Stauffer

Scientists have labored for decades to find antibiotics that work against Gram-negative bacteria, which cause some of the deadliest infections in hospital settings and are most likely to be resistant to treatment with existing antibiotics. In a study reported in the journal Chemical Science, researchers developed a new method to determine how antibiotics with specific chemical properties thread their way through tiny pores in the otherwise impenetrable cell envelopes of Gram-negative bacteria.

“Antibiotic resistance is a major clinical problem now in the world,” said University of Illinois Urbana-Champaign biochemistry professor Emad Tajkhorshid, who led the study with biophysics PhD students Nandan Haloi and Archit Kumar Vasan, and biochemistry research scientist Po-Chao Wen. “Tens of thousands of people die each year in the U.S. as a result of untreatable bacterial infections, and the problem is even worse in other parts of the world.”

Most of these infections are attributable to Gram-negative bacteria, which have a hard outer cell membrane that many antibiotics fail to penetrate, Tajkhorshid said. In 2017, U. of I. chemistry professor and current study co-author Paul Hergenrother reported in the journal Nature that his team had determined a set of chemical rules for antibiotic compounds that could pass through Gram-negative bacterial membranes. Using this guidance, Hergenrother and his colleagues successfully converted antibiotics that worked only against Gram-positive bacteria into effective killers of Gram-negative microbes, which are much harder to treat.

One key to that discovery was that some antibiotics could use specific membrane pores to penetrate the cell membranes of Gram-negative bacteria if chemists added a positively charged group, for example an amine, to them, Tajkhorshid said. While experiments proved the idea worked, the researchers did not understand precisely why it worked.

To gain a better understanding, the scientists had to determine at a microscopic level how the antibiotic interacted with different parts of the bacterial pore as it passed through. One approach to tracking molecular interactions involves the use of supercomputers to model the chemical characteristics of every atom in a system and run simulations that reveal how the system behaves. This technique, called “molecular dynamics simulation,” is computationally intensive, however, and may not track the molecular behavior of a complex system in full, Tajkhorshid said.

To reduce the computational load, Haloi and Vasan developed a method that generated the most likely pathway for the antibiotic as it wriggled through the pore, then allowed their molecular dynamics simulations to help them calculate the energetics of each potential step. They ran the simulations for the antibiotic with and without the amine group attached.

“Every potential pathway through the pore has an energy associated with it, and we are looking for the pathway that is energetically most favorable,” Tajkhorshid said.

This effort revealed that the positively charged amine group on the antibiotic interacted favorably with negative charges lining the bacterial pore, he said. These attractive forces allowed the antibiotic with the amine group to line up in an energetically more favorable manner as it threaded its way through the narrowest part of the pore, called the constriction zone. The antibiotic without the amine faced a higher energy barrier to passage through the pore.

Mutation experiments – performed by chemistry PhD student Emily Geddes in the Hergenrother lab with U. of I. microbiology professor William Metcalf – confirmed that the interaction between the amine and negatively charged regions of the pore enabled passage of the antibiotic into the bacterium.

“Understanding the precise mechanisms that allow potential antibiotics to penetrate Gram-negative bacterial cell membranes will allow scientists to design new drugs – or modify old ones – to attack and kill microbes that are otherwise resistant to treatment with antibiotics,” Vasan said.

The technique developed to lessen the computational resources needed to address complex problems like this one also will be useful for other explorations of molecular biology, Tajkhorshid said.

“We can use these methods to explore other disease-related processes that involve, for example, interactions between chemical compounds and proteins, how drugs bind their receptors in the body or how specific chemical groups in an antibody bind to surface antigens on a virus,” Haloi said.

“Although we developed our method to study barrel-shaped proteins, this approach should be generally applicable to many other systems,” Wen said.

The National Institutes of Health and National Science Foundation supported this research. The computational work was performed on the Blue Waters supercomputer at the National Center for Supercomputing Applications at the U. of I.