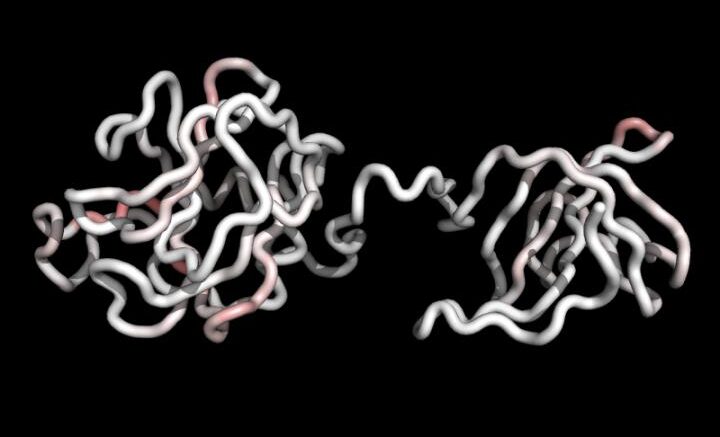 A molecular model of the F12 biotherapy shows the fold of its polypeptide backbone. Residual T cell epitopes are mapped onto the structure and colored from white (no epitopes) to dark red (dense overlapping epitopes). The muted red coloring indicates that T cell epitopes have been broadly silenced in the engineered F12 variant, and this reduced epitope content underlies the molecule's improved safety and efficacy profile. Courtesy of Dartmouth Engineering

The Centers for Disease Control and Prevention (CDC) has prioritized finding effective treatment of Methicillin-resistant Staphylococcus aureus (MRSA), one of the most common bacterial pathogens and the single most deadly drug-resistant bacteria in the United States. Now, a new study led by Dartmouth Engineering faculty shows promise for an engineered lysin-based antibacterial agent that may enable safe, repeated dosing to treat life-threatening infections by MRSA and other types of S. aureus.

In recent years, lysins -- enzymes naturally produced by microbes and associated viruses -- have shown potential to treat S. aureus, which can rapidly acquire resistance to other types of antibiotic drugs.

"Lysins are one of the most promising next-generation antibiotics. They kill drug-sensitive and drug-resistant bacteria with equal efficacy, they can potentially suppress new resistance phenotypes, and they also have this laser-like precision," said Karl Griswold, corresponding author and associate professor of engineering at Dartmouth.

While there is promise in lysins, development has been slowed due to concerns that they prompt humans' immune systems to develop antidrug antibodies, which can have negative side effects including life-threatening hypersensitivity reactions.

That's why the Dartmouth Engineering team--which also included researchers in Dartmouth's computer science department, The Lundquist Institute at Harbor-UCLA Medical Center, Lyticon, and Stealth Biologics--engineered and patented F12, a new lysin-based antibacterial agent. F12 is essentially able to hide from the human immune system (due to T cell epitope deletion), and therefore does not cause the same negative side effects as unmodified, natural lysins.

F12 is the first lysin-based treatment with the potential to be used multiple times on a single patient, making it ideal to treat particularly persistent drug-resistant and drug-sensitive infections. Preclinical studies showed the efficacy of F12 does not diminish with repeated doses, while two other anti-MRSA lysin treatments currently in clinical trials are only designed to be used a single time.

"We have engineered this super potent, super effective anti-MRSA biotherapeutic, and we've done it in a way that renders it compatible with and largely invisible to the human immune system. By making it a safer drug, we've enabled the possibility of dosing multiple times in order to treat even the most highly refractory infections," said Griswold.

The paper details the treatment's positive results in rabbits, mice with partially-humanized immune systems, and studies with extracted human immune cells. Griswold believes the antibacterial agent could be ready for human clinical trials as soon as 2023.

"This is the first report of a translation-ready deimmunized lysin, and F12 has serious, bonafide clinical potential," said Griswold.