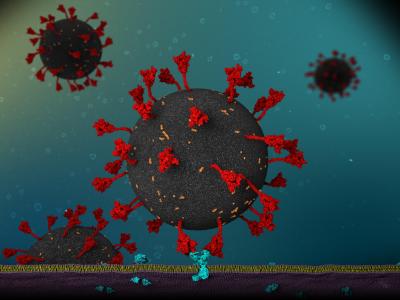 The S protein has a highly flexible stalk that is composed of two independent joints. The flexible motions of the S proteins enable the receptor binding domain to have various orientation and the most probable S protein configurations are competent for ACE2 binding. Courtesy of Dr. Yeolkyo Choi

Bioengineering researchers at Lehigh University have identified a previously unknown interaction between receptors in human cells and the spike, or "S," protein of SARS-CoV-2, the virus that causes COVID-19. This new information could aid in the development of new strategies to block SARS-CoV-2 entry into human cells.

X. Frank Zhang and Wonpil Im knew from recent studies that the interaction between the SARS-CoV-2 spike protein and angiotensin-converting enzyme 2 (ACE2) receptors in human cells is stronger than the interaction between the structurally identical spike protein of SARS-CoV-1, the virus that caused the 2002-2004 SARS outbreak, and the same receptors.

"Our goal was to characterize SARS-CoV-2 and study the protein-protein interactions during its invasion of human cells to provide more insights into the mechanisms that make this first step in its successful invasion process possible," says Zhang, an associate professor in Bioengineering and Mechanical Engineering & Mechanics at Lehigh.

Using combined single-molecule force spectroscopy and molecular dynamics simulations, Zhang's and Im's teams were able to identify a previously unknown interaction between ACE2 glycans (sugar groups attached to the surface of proteins) and the SARS-CoV-2 spike. It is this interaction that appears to be responsible for the strengthening of the virus-cell interaction. This may partially explain the higher infection rate of COVID-19 compared to the similar virus that caused the 2002-2004 SARS outbreak, they say.

"We were surprised to find that the specific interaction between ACE2 glycans and the SARS-CoV-2 spike protein is what makes the separation of the virus from cells so difficult," says Im, who is a professor of bioengineering, computer science, chemistry and biological sciences, as well as the Presidential Endowed Chair in Health, Science and Engineering at Lehigh.

To arrive at these findings, the team employed Zhang's innovative single-molecule detection technique, measuring the detachment force of the spike protein-ACE2 receptor interaction. Using the all-atom molecular dynamics simulations of the complex system available in CHARMM-GUI developed by Im, they then identified the detailed structural information in this interaction.

"After we carefully removed all of the ACE2 glycans and measured the force of the interaction, we saw that the strength of the SARS-CoV-2 spike-ACE2 interaction fell back to levels similar to SARS-CoV-1," says Zhang.

"It is possible that this newly-discovered interaction with ACE2 glycans could be a contributing factor to the higher rates of COVID-19 than the structurally similar SARS-CoV-1, which has a weaker interaction," says Zhang. "Our hope is that researchers may be able to use this information to develop new strategies to identify, prevent, treat and vaccinate against COVID-19."