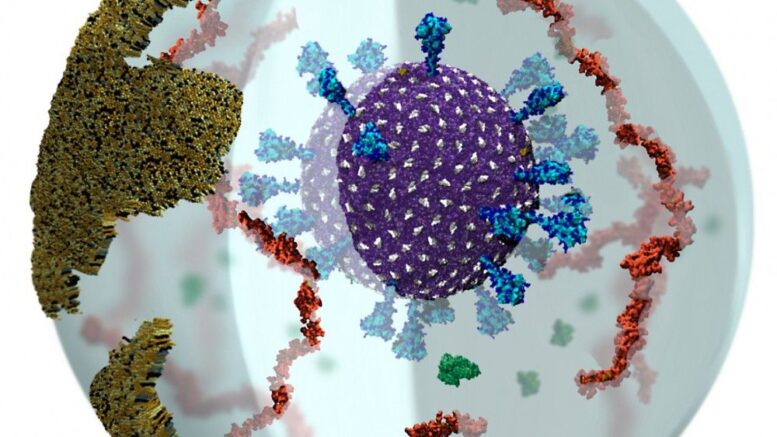 A team led by Rommie Amaro of the University of California, San Diego (UC San Diego), has used the Summitsupercomputer at the US Department of Energy (DOE)'s Oak Ridge National Laboratory (ORNL) to model an aerosolized SARS-CoV-2 viral particle for the first time.

The researchers, collectively dubbed Team #COVIDisAirborne, took data from experiments with aerosolized viruses that provided them the ingredients of an aerosol. They then tweaked the wild-type virus that they modeled in 2020, added in SARS-CoV-2 Delta variant spikes, and placed the viral particle into a respiratory aerosol.

The 1.05-billion-atom system is among the largest biochemical systems ever simulated at the atomic level. The simulation will help scientists understand the interactions between the molecules in an aerosolized viral particle. The feat earned the team a finalist spot for the Association of Computing Machinery Gordon Bell Special Prize for High Performance Computing–Based COVID-19 Research. The award recognizes outstanding research achievement towards the understanding of the COVID-19 pandemic through the use of high-performance computing. The team’s results will be presented at the International Conference for High Performance Computing, Networking, Storage and Analysis(SC21), to be held Nov. 14–19, 2021, in St. Louis.

“Until now, scientists have never seen what an aerosol particle might look like at the atomic level. Our simulations are providing the very first views of aerosols and the viruses inside them,” Amaro said.

Traditionally, scientists have found it difficult to study aerosols and the components within them due to their small size. The team knew that if they used ORNL’s IBM AC922 Summit, the nation’s fastest supercomputer, they could gain never-before-seen views of a virus suspended in an aerosol. They simulated a billion-atom aerosol particle on Summit, scaling their nanoscale molecular dynamics, or NAMD, code to the full machine. Abigail Dommer, a graduate student researcher in Amaro’s team at UC San Diego, ran four simulations of the phenomenon for more than 12 hours each. Summit is located at the Oak Ridge Leadership Computing Facility, a DOE Office of Science user facility at ORNL.

“There are so many scientific questions around what happens to viruses when they’re inside aerosols,” Amaro said. “We want to know what causes some viruses to be airborne-transmissible and others not. Under what conditions are some viruses more protected? What in the aerosol is buffering them from damage, and how?”

The results will open new doors for experiments of airborne viruses. They will help scientists understand what is interacting with a virus and when, which molecules might travel to the outside of the particle to protect the inside contents, and whether the outside contains open areas that allow for water evaporation. This can help scientists come up with evidence-based mitigation and intervention measures against viruses.

The team also studied other phenomena related to the SARS-CoV-2 Delta variant. Using artificial intelligence (AI) with the DeepDriveMD code on the Frontera supercomputer at the Texas Advanced Computing Center, together with weighted ensemble simulations, the team sampled motions in the spike protein. They then determined that the Delta virus is significantly better at opening up its spike protein than the original SARS-CoV-2 wild-type virus. This mechanism allows it to more easily bind to and infect cells, which might explain why the Delta variant is so infectious.

They also used an AI method called OrbNet, developed by Thomas Miller and Fred Manby of Entos, to evaluate interactions between calcium and mucus molecules in the aerosol environment. This is helping them study whether gelation might protect the virus from damage in the aerosol particle.

“With OrbNet, we can use AI to zoom in on the interactions of calcium with the spike protein and see more details of how these molecules interact with one another,” Amaro said. “OrbNet allows us to get the depth and rigor of high-level calculations with many fewer computational resources. This ultimately lets us assess how well we are modeling the interaction of calcium with the protein.”

Finally, the team used the Bridges-2 system at the Pittsburgh Supercomputing Center and the Oracle Cloud system at Oracle for Research to simulate what happens to the spike protein at a lower pH.

“As these aerosols fly through the air, they dehydrate over time as well as uptake atmospheric gases such as carbon dioxide. When this happens, the aerosols become more acidic,” Amaro said. “That’s another element of aerosols that ordinarily would destroy viruses and proteins. With our simulations, we are trying to understand exactly what happens to the virus at a lower pH.”