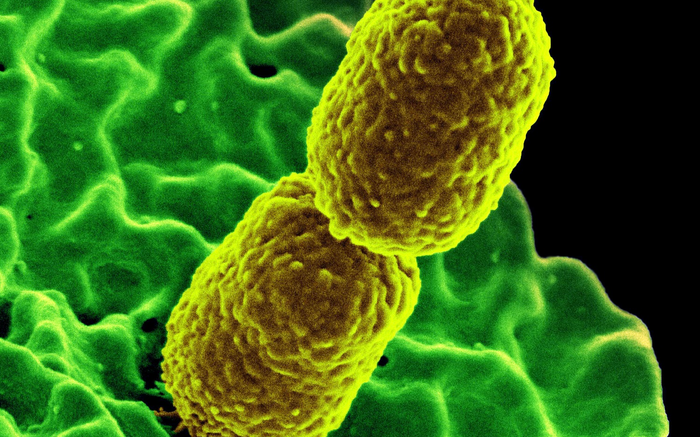 Most people have already experienced first-hand how important a healthy microbiome is when they had to take a broad-spectrum antibiotic. Unfortunately, the drug does not only destroy the pathogens. It also affects the ‘good’ bacteria in the bowel that otherwise occupy the most important niches and help fend off pathogens. This protective mechanism is called colonization resistance. But which bacterial species are commensal, and how can they protect against colonization? Professors Till Strowig and Bärbel Stecher decided to take a closer look at these questions.

The intestinal inhabitant Klebsiella pneumoniae can cause severe pneumonia, urinary tract infections or even sepsis in weakened patients. It is increasingly resistant to common antibiotics and can facilitate further infections. In collaboration with partners in Magdeburg and Hannover, the HZI department led by Strowig, was able to isolate strains of a related bacterium from the intestine that are highly effective against K. pneumoniae. This species, identified as Klebsiella oxytoca, uses the same sugars as the pathogen, but it does it more efficiently so that there is not enough left for the pathogen to survive.

“K. oxytoca can specifically force out multidrug-resistant K. pneumoniae bacteria because it effectively blocks the niche to be occupied by the hospital germ," explains Strowig. The scientists were also able to show in mice that these bacteria help the bacterial composition inside the intestines regenerate more quickly after antibiotic therapy and ensure that protection against infections is restored.

“First we wanted to find out how susceptible healthy adults and children are to colonization with multi-resistant K. pneumoniae bacteria," says lead author Lisa Osbelt, explaining the study approach.

For this study, the scientists took stool samples from 100 healthy people and incubated them with the germ overnight. The next day, the growth of the bacteria was measured. It revealed a great variability in the colonization depending on each individual’s microbial community in the intestine. Next, the group examined the samples in which the germ had grown poorly; in many of them K. oxytoca could be identified. The researchers then tested the behavior of the two bacteria in different mouse models and found that the addition of K. oxytoca can significantly reduce susceptibility to the hospital germ. When germ-free mice were colonized with different groups of bacteria (12 bacterial strains in total), three additional strains cooperated with K. oxytoca for the protective effect.

One of the best-known bacteria in the human gut is Escherichia coli. It is frequently mentioned in headlines as a ‘bad’ bacterium because it is considered an indicator of fecal contamination of drinking water, and certain variants can cause infections. But the bacterium has many different strains and, besides the pathogenic variants, there are also commensal representatives. However, so far little is known about the role of these variants for human health. Stecher and her team at the Max von Pettenkofer-Institute at the LMU found out some time ago that commensal E. coli protect against salmonella infection. Again, it is their sugar consumption that limits the growth of the salmonellae by depriving them of food.

In the current study, the researchers were able to demonstrate that this protective effect of E. coli also depends on the microbial environment in the gut. This means that it depends on which microorganisms are still present, in other words, whether E. coli is in good company.

“If there are lachnospiraceae present in our model that can also metabolize simple sugars, E. coli can provide protection – otherwise, it can’t," explains Stecher. She adds: “Overall, we now understand better why probiotics may also help in some people but not in others. The reason for it is the microbial environment, which varies greatly from person to person.”

Studying hundreds of bacteria and other microorganisms of the microbiota for their effects is an incredibly complex undertaking – even in mice. With their mouse model developed in Munich, the scientists can investigate the colonization and influence of pathogens in a specifically targeted manner. A synthetic cocktail of 12 bacterial strains colonizes germ-free mice stably over several generations and forms an intestinal microbiota representative of mice. Both studies involving Klebsiella and E. coli respectively use this model to carefully identify the interdependencies in the intestinal flora. But even in mice, it becomes clear how complex the interdependencies are. However, the studies of the microbiota researchers give us hope, because they show once again that we are on the right track with regard to the processes in the intestine.

"The use of live bacteria, so-called probiotics, for the treatment of patients with existing colonization and as preventive administration after antibiotic therapy is generally conceivable," says Strowig.

Stecher adds, “The utilization of a broad sugar range plays a major role for the design of these bacterial cocktails, and a protective cocktail must always contain more than one bacterium.”