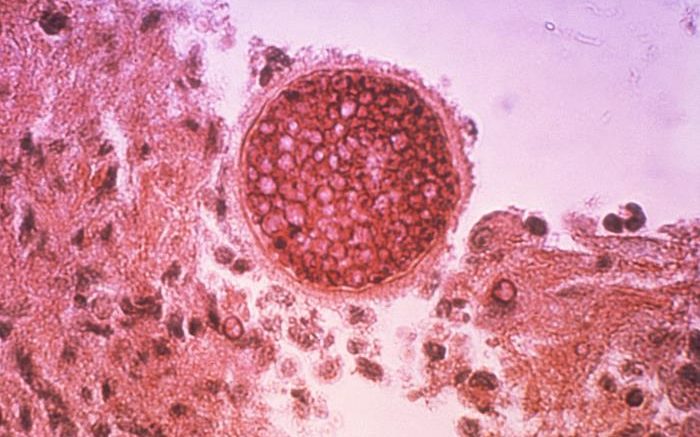 Under a magnification of 480X, this periodic acid-Schiff (PAS)-stained lymph node tissue sample, revealed the presence of a spherule of a Coccidioides sp. fungal organism, in a case of coccidioidomycosis, also known as Valley Fever. Courtesy of CDC

Valley fever is endemic to hot and dry regions such as the southwestern United States and California's San Joaquin Valley, but scientists at the University of California, Irvine predict that climate change will cause the fungal infection's range to more than double in size this century, reaching previously unaffected areas across the western U.S.

In a study published online recently in the American Geophysical Union journal GeoHealth, interdisciplinary UCI researchers claim that in a high-warming scenario, the list of affected states will jump from 12 to 17, and the number of individual Valley fever cases will grow by 50 percent by the year 2100. The states projected to host newly endemic counties are Montana, Nebraska, North Dakota, South Dakota and Wyoming, and the disease is expected to become more widespread in Colorado, Idaho and Oklahoma.

"The range of Valley fever is going to increase substantially," said lead author Morgan Gorris, a former UCI PhD student in Earth system science who was awarded her doctorate in August. "We made projections out to the end of the 21st century, and our model predicts that Valley fever will travel farther north throughout the western United States, especially in the rain shadow of the Rocky Mountains and throughout the Great Plains, and by that time, much of the western U.S. will be considered endemic."

The current Valley fever endemicity map used by the national Centers for Disease Control and Prevention is based on a skin-test study conducted on a San Diego naval base in the 1940s. Using this decades-old information as a starting point, Gorris collected health department data on Valley fever cases reported by hospitals in many Western states.

Then she and her team studied the climate conditions in places where Valley fever is most common. They concluded that counties with more than 10 cases per 100,000 people all had average annual temperatures above 10 degrees Celsius (50 degrees Fahrenheit) and rainfall below 600 millimeters (23.6 inches).

"Morgan made this model based on temperature and rainfall; it provides similar but not exactly the same projections of where the CDC says Valley fever is," said co-author James Randerson, Chancellor's Professor and Ralph J. and Carol M. Cicerone Chair in Earth System Science. "In fact, we think it may guide efforts to build a better contemporary map of where the disease poses a threat to public health."

Gorris said the study is really focused on predicting the expansion of Valley fever: "Both temperature and precipitation are expected to change considerably in the western U.S. in future decades, but it's the increasing temperatures in already dry states that allow the disease to spread."

At present, parts of California and the Southwest are particularly suited for nurturing the fungus, scientifically known as Coccidioides. A smattering of winter rain on dry ground enables fungal growth beneath the surface. When the soil dries, the elongated strands of fungus break apart into spores, some as small as 2 microns in diameter. If they're agitated by earth-moving equipment or the boots of workers, the particles can be lofted into the air and inhaled by people in the area.

Laborers in construction and agriculture, as well as prisoners paving roadways and fighting fires in remote locales, are particularly susceptible to breathing in the airborne spores. It's a burgeoning public health concern because the number of cases in California and other regions has been going up over time.

Once in the lungs, the fungus transforms from strand-like into spherules, tiny balls that grow and spread in pulmonary tissues. About 40 percent of those who inhale the spores become sick. Early symptoms of Valley fever are similar to those of the flu: cough, fever, chills and night sweats. For this reason, the disease is often misdiagnosed and can go untreated. In advanced cases, the fungus can be disseminated from the lungs to other parts of the body, potentially causing skin lesions that can result in limb loss.

In extreme cases, the disease can travel to the brain, leading to swelling and death. Roughly 5 percent of people with Valley fever will have a severe form of it, and 1 percent will die. Pregnant women, the elderly and individuals with HIV are considered most vulnerable to severe forms of Valley fever. Filipinos and those of African descent are also at heightened risk. The disease disproportionately affects people in low-income communities, Randerson said.

"By 2100, for a business-as-usual scenario in which we do not take serious action to limit climate change, we would predict a doubling of the area where this disease is present," he said. "It's a huge expansion and especially worrisome because Valley fever is going to impact previously untouched communities throughout the West."

Kathleen Treseder, UCI professor of ecology & evolutionary biology and Earth system science, and Charlie Zender, UCI professor of Earth system science, were co-authors on this study, which was supported by the U.S. Department of Defense, the National Science Foundation, the U.S. Department of Energy, NASA, and the Gordon and Betty Moore Foundation.