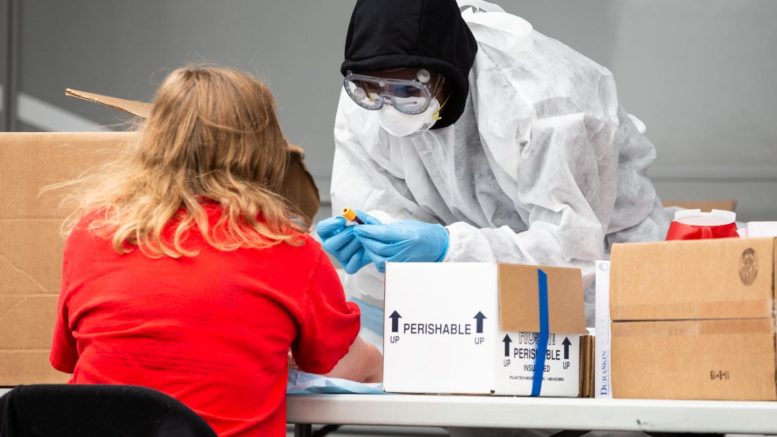 Between April 25 and May 1, more than 4,600 Hoosiers were tested for viral infections and antibodies of SARS-CoV-2 as part of a study by the Fairbanks School of Public Health at IUPUI and the Indiana State Department of Health. Physical-distancing guidelines were followed while capturing these photos. Courtesy of Liz Kaye, Indiana University

The results of the first statewide random sample study in the United States to measure the spread of COVID-19 indicated a general population prevalence of about 2.8 percent in Indiana.

This closely monitored study was conducted by the Indiana University Richard M. Fairbanks School of Public Health at IUPUI in collaboration with the Indiana State Department of Health. The findings were published July 21 in Morbidity and Mortality Weekly Report.

"Using data to guide decisions has been the foundation of how the State of Indiana responds to the pandemic," Indiana Gov. Eric J. Holcomb said. "We are fortunate to have the Fairbanks School of Public Health conduct this first-of-its kind study for us and look forward to the information that will come with future waves of the random sample testing."

Between April 25 and May 1, researchers tested more than 4,600 Hoosiers for viral infections and antibodies of SARS-CoV-2, the novel coronavirus that causes COVID-19. This number includes more than 3,600 people who were randomly selected from a master list of Indiana residents derived from tax returns, including filers and dependents; and an additional 900 volunteers recruited through nonrandom outreach to the African American and Hispanic communities to get a more in-depth view of the virus's activity within hard-hit populations.

"Because we cannot test everyone, random sample testing allows us to confidently evaluate the spread of COVID-19 in Indiana," said Nir Menachemi, lead scientist on the study and professor and the Fairbanks Endowed Chair in the Fairbanks School of Public Health. "The results of this study have furthered our scientific knowledge of COVID-19 and contributed valuable information that influenced complex statewide decision-making."

The researchers determined that 1.7 percent of participants tested positive for the novel coronavirus and an additional 1.1 percent tested positive for antibodies, resulting in an estimated overall population prevalence of SARS-CoV-2 of 2.8 percent. An estimated 187,802 Hoosiers were infected with COVID-19 at the time of the study, approximately 10 times higher than the confirmed cases in the state.

Participants who reported living with someone who tested positive for COVID-19 had a prevalence rate of 33.6 percent.

"The percentage of participants who had a positive test result was 15 times higher among participants who lived with someone who had received a diagnosis of COVID-19," Menachemi said. "Coupled with the low statewide prevalence, we believe that social distancing efforts helped to minimize the spread of COVID-19 and is an important measure in preventing transmission."

"The study's findings among asymptomatic individuals are crucial to our efforts to mitigate the spread of COVID-19 in Indiana," said State Health Commissioner Kris Box, MD, FACOG. "Hoosiers may not feel sick but can still infect someone else, so it's vital that every Hoosier takes steps to reduce the spread of this virus."

Rates of current or previous infection were significantly higher among Hispanic participants, at 8.32 percent, than among non-Hispanics, at 2.29 percent.

The nonrandom sample had higher infection rates, including 22.8 percent of participants who were currently infected; 20 percent of those infected reported being asymptomatic. These findings suggest that nonrandom samples are more suitable for determining the impact of the virus in vulnerable communities, but not for deriving state estimates of infections.

"Because most Hoosiers had not been infected at the time of the study, we need to continue social distancing, make sure we are washing our hands often and always wearing a mask when we are in public," Menachemi said.