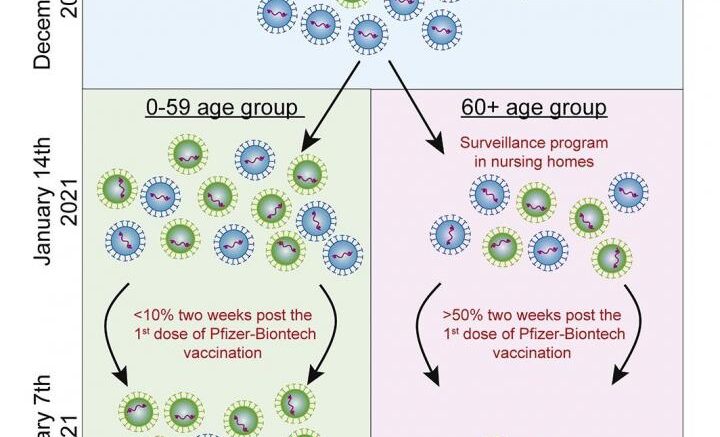 Spread of the British variant in Israel. Courtesy of Tel Aviv University

A new study at Tel Aviv University found that the British variant (B.1.1.7) of Covid-19 is 45% more contagious than the original virus. The researchers relied on data from about 300,000 PCR tests for Covid-19 obtained from the COVID-19 testing lab, which was established in collaboration with the Electra Group.

The new study was conducted by professor Ariel Munitz and professor Moti Gerlitz of the Department of Clinical Microbiology and Immunology at the Sackler Faculty of Medicine, together with Dr. Dan Yamin and PhD student Matan Yechezkel from the Laboratory for Epidemic Modeling and Analysis (LEMA) at the Department of Industrial Engineering, all at Tel Aviv University. The study's results were published in the journal Cell Reports Medicine.

The Electra-TAU laboratory was established in March 2020, right after the outbreak of the first wave of the pandemic in Israel. To date, it has analyzed hundreds of thousands of tests from all over the country -- from public drive-in test facilities, as well as programs targeting specific populations -- such as 'Shield for Fathers and Mothers' which routinely ran tests in at-risk hotspots like retirement homes.

As Munitz explains, "We use a kit that tests for three different viral genes. In the British variant, also known as B.1.1.7, one of these genes, the S gene, has been erased by the mutation. Consequently, we were able to track the spread of the variant even without genetic sequencing."

According to Munitz, the data from the lab shows that the spread of the British variant was very rapid: On Dec. 24, 2020 only 5% of the positive results were attributed to the British variant. Just six weeks later, in January 2021, this variant was responsible for 90% of Covid-19 cases in Israel. The current figure is about 99.5%.

"To explain this dramatic increase, we compared the R number of the SARS-CoV-2 virus with the R of the British variant. In other words, we posed the question: How many people, on the average, contract the disease from every person who has either variant? We found that the British variant is 45% - almost 1.5 times - more contagious."

In the second stage of the study, the researchers segmented contagion by age groups. The results indicated that the turning point for the 60+ population compared to other age groups occurred two weeks after 50% of Israel's 60+ population received their first vaccine shot.

"Until January we saw a linear dependence of almost 100% between the different age groups in new cases per 1,000 people," says Yamin. "Two weeks after 50% of the 60+ population received the first dose of the vaccine this graph broke sharply and significantly. During January a dramatic drop was observed in the number of new cases in the 60+ group, alongside a continued rise in the rest of the population. Simply put, since more than 90% of those who died from Covid-19 were over 60, we can say that the vaccine saved hundreds of lives - even in the short run."

Moreover, the new study proves that active monitoring of at-risk populations works. "There is a threshold value for determining whether a specific test is positive or negative for the virus - with a lower value indicating a higher viral load," says Munitz. "When we compared the threshold values of the different genes in 60+ residents of retirement homes with the values measured in 60+ persons in the general population, we saw significantly higher values in the retirement homes. This means that the viral load in retirement homes was lower compared to the rest of the population.

Since the residents of retirement homes are tested routinely, while other people are usually tested only when they don't feel well or have been in contact with someone who had tested positive for the virus, we conclude that constant monitoring of at-risk populations is a method that works. It is important to emphasize: the relatively low viral load was found in retirement homes despite the fact that the British variant had already begun to spread in all populations. Consequently, we show that monitoring retirement homes, together with vaccination that gives precedence to vulnerable populations, prevent illness and mortality."

Yemin concludes, "Due to crowded conditions, large households and age distribution in the Israeli population, the coronavirus had a more favorable environment for spreading in Israel compared to most Western countries. Our message to the world is that if with our problematic starting point a distinct decline was identified, other Western countries can certainly expect the curve to break - despite the high contagion of the British variant - with a dramatic drop in severe cases following the vaccination of 50% of the older population, alongside targeted testing at risk epicenters."