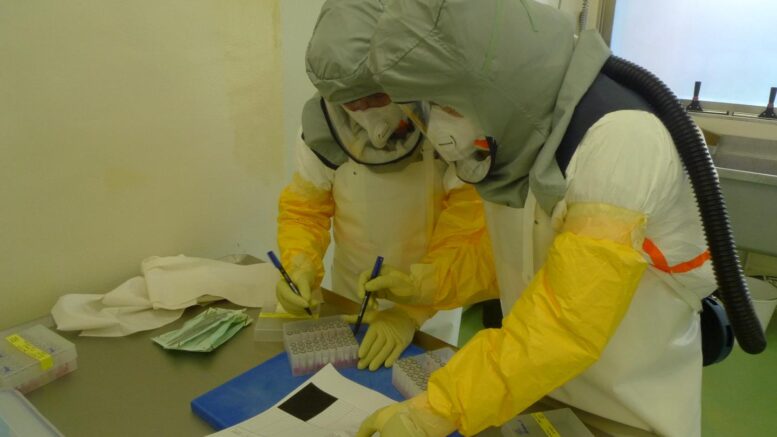 Working with coronavirus at the High Biosafety Level Unit of IRTA-CReSA. Courtesy of IRTA CC BY-NC 4.0

On May 8, 2020, the Institute of Agrifood Research and Technology (IRTA) reported the case of the first cat infected with SARS-CoV-2 in Spain. It was a 4-year-old cat called Negrito, who lived with a family affected by COVID-19, with one case of death. Coinciding with these facts, the animal presented severe respiratory difficulties and was taken to a veterinary hospital in Badalona (Barcelona), where it was diagnosed with hypertrophic cardiomyopathy. Due to a terminal condition the hospital decided to do a humanitarian euthanasia. The necropsy, performed at the High Biosafety Level Laboratories of the Animal Health Research Center (CReSA) at IRTA, confirmed that Negrito suffered from feline hypertrophic cardiomyopathy and had no other lesions or symptoms compatible with a coronavirus infection. The RT-PCR test confirmed that the animal had become infected with SARS-CoV-2, but with a very low and residual viral load.

To date there have been few cases of feline SARS-CoV-2 infection worldwide, which is why researchers have deepened the case study and published it recently in the journal Proceedings of the National Academy of Sciences (PNAS). They performed serological tests on the cat Negrito and another cat that also lived in the same home, Whisky, which did not show any signs of disease. The tests, carried out by the AIDS Research Institute (IrsiCaixa), show that the two cats had developed antibodies against SARS-CoV-2.

"In both cases we have detected neutralizing antibodies, in other words, they have the ability to bind to the virus and block it," explains Julià Blanco, IGTP researcher at IrsiCaixa. He goes on to say "this is important because it shows us that the immune system of cats can deal with SARS-CoV-2 and, in these specific cases, protect them from developing symptoms".

Experimental studies currently being conducted show that cats, in addition to becoming infected with SARS-CoV-2, can transmit it to other nearby cats, but without any clinical signs. However, the first suspicions of researchers were that both Negrito and Whisky had been infected by their owners because they had not had contact with other cats. To check this, the team analyzed the genetic sequence of the virus that Negrito had and found that "it has a 99.9% similarity to the virus of the owner who died, this suggests that the cat became directly infected from family members," explains Marc Noguera-Julián, researcher at IrsiCaixa.

Given the number of people infected worldwide and the few reported cases of animals, experts continue to note that "pets play a negligible role in the epidemiology of SARS-CoV-2 and, in particular, cats become very residually infected and there is no evidence of transmission of the virus to humans. This is a case of reverse zoonosis, in which cats are the side victims without the virus causing them health problems", states Júlia Vergara-Alert, researcher at IRTA-CReSA. So far, there has only been one reported episode in the Netherlands in which a farmer became infected through minks, which would be the first known potential case of COVID-19 zoonosis.

IRTA and the Council of Veterinary Associations of Catalonia, with the collaboration of the Veterinary Clinical Hospital of the Universitat Autònoma de Barcelona are studying whether pets can become infected with SARS-CoV-2

Following the Negrito case, in May the IRTA-CReSA coronavirus research team, in coordination with the Council of Colleges of Veterinarians of Catalonia and the Veterinary Clinical Hospital of the Universitat Autònoma de Barcelona, started a study to assess how often cats, dogs and ferrets have become infected with SARS-CoV-2 from people in a family setting. The study is being carried out with the voluntary participation of veterinary clinics and hospitals in Catalonia and consists of taking samples of oropharyngeal and rectal swabs, as well as animal serum.

"We want to check if the case of Negrito and Whisky has been punctual or is repeated in more cases; in this way we will have more scientific information on how the most common pets can become infected with SARS-CoV-2 and to what degree", explains Joaquim Segalés, IRTA-CReSA researcher and professor at the Universitat Autònoma de Barcelona (UAB). The professor also remarks that "so far, it is known that around the world there have been some cases of cats and dogs that have become infected through their owners, but these animals have not suffered a serious illness and there is no evidence that they have transmitted the virus to their owners."