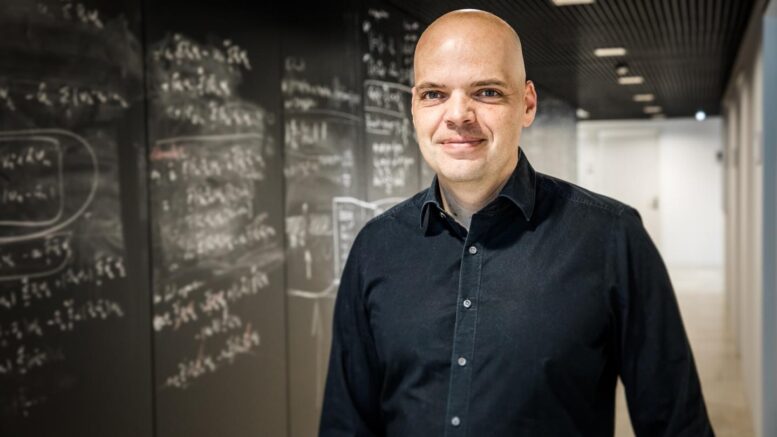 Fluid and turbulence physicist Björn Hof and his team applied the statistical methods to epidemic spreading and discovered surprising features of the infection curves. Courtesy of IST Austria/Nadine Poncioni

What has fluid physics to do with the spreading of the coronavirus? Whirlpools and pandemics seem to be rather different things, certainly in terms of comfort. Yet, newest findings about epidemic spreading come from physics professor Björn Hof and his research group at the Institute of Science and Technology Austria (IST Austria), who specialize in fluids and turbulent flows. When early last year Björn Hof had to cancel his scheduled visit to Wuhan, his wife's hometown, his focus abruptly shifted to epidemic spreading.

"My group normally investigates turbulent flows in pipes and channels," Hof explains, "Over the last 10 years we have shown that the onset of turbulence is described by statistical models that are equally used to describe forest fires and epidemics." Given this experience, programming an epidemic model was a straightforward exercise for Burak Budanur, the group's theorist and computational expert.

Standard epidemic models suggest that the level of mitigation has a continuous effect on the height of the epidemic peak. "The expectation is that the curve flattens in proportion to the level of social distancing," says Davide Scarselli, main author of the paper. However, when he first simulated epidemics taking limits in testing and contact tracing into account, the picture was a very different one. The maximum of infected people initially decreased as expected but then suddenly collapsed to almost zero as the mitigation level reached a certain threshold. In one limit, approximately half of the people got infected during the epidemic. In the other one only 3 percent caught the disease. Surprisingly, it was impossible to obtain a result in between these two outcomes: Either there is an outbreak of considerable size, or there is almost none whatsoever.

Testing of known contacts (not testing per se) is one of the most powerful ways to slow down an epidemic. However, the number of cases that can be traced every day is limited and so is the number of tests that can be administered. As the researchers found out that exceeding these limits at one point during the epidemic has far-reaching consequences. "If this happens," says Timme, "The disease begins to spread faster in the unchecked areas and this unavoidably causes a super-exponential increase in infections." Already, exponential growth is immense. It means doubling infections every few days. Super-exponential though signifies that even the rate of doubling becomes faster and faster.

As long as this acceleration can be avoided, epidemic curves collapse to a comparably low case level. Interestingly, it matters relatively little whether contact tracing is protected by a small or a large safety margin. The numbers remain comparatively low. If on the other hand the limit is only surpassed by a single case the super-exponential growth causes the total case numbers to jump to a tenfold level.

"Like most nations, Austria didn´t react early against the second wave. Once not all contacts could be traced anymore during last September, it wasn't difficult to predict that case numbers would soon surge at a faster than exponential rate," says Scarselli. While over the last year it has become apparent that an early and decisive response is essential when facing exponential growth, the team's study shows that test limits make timing even more crucial. The difference between success and failure of a lockdown is marginal, or as Budanur puts it: "A policy that would have worked yesterday will not only take much longer to take effect, but it may fail entirely if it is implemented a single day too late." Hof adds: "Most European countries only reacted when health capacity limits became threatened. Actually, policy makers should have paid attention to their contact tracing teams and locked down before this protective shield fell apart."

More recently the team has looked into optimal strategies, where lockdowns are used as a preventive tool rather than an emergency brake. A manuscript that outlines the optimal strategy, which minimizes both, the number of infected people and the required lockdown time, is currently in progress.