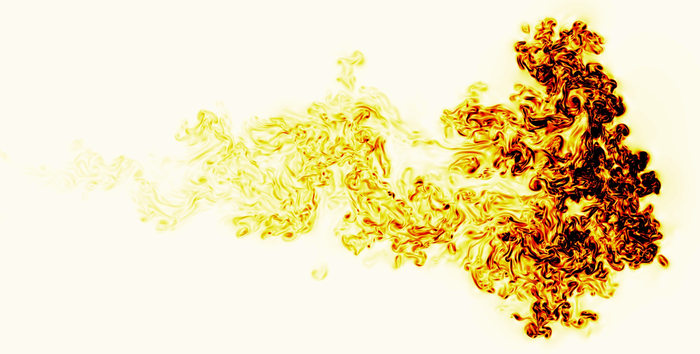 Turbulence is everywhere – in the movement of the wind, the ocean waves and even magnetic fields in space. It can also be seen in more transient phenomena, like smoke billowing from a chimney, or a cough.

Understanding this latter type of turbulence – called puff turbulence – is important not only for the advancement of fundamental science, but also for practical health and environmental measures, like calculating how far cough droplets will travel, or how pollutants released from a chimney or cigarette might disperse into the surroundings. But creating a complete model of how turbulent puffs of gases and liquids behave has so far proven elusive.

“The very nature of turbulence is chaotic, so it’s hard to predict,” said professor Marco Edoardo Rosti, who leads the Complex Fluids and Flows Unit at Okinawa Institute of Science and Technology Graduate University (OIST). “Puff turbulence, which occurs when the ejection of a gas or liquid into the environment is disrupted, rather than continuous, has more complicated characteristics, so it’s even more challenging to study. But it’s of vital importance – especially right now for understanding airborne transmission of viruses like SARS-CoV-2.”

Until now, the most recent theory was developed in the 1970s, and focused on the dynamics of a puff only at the scale of the puff itself, like how fast it moved and how wide it spread.

The new model, developed in a collaboration between Rosti from OIST, Japan and professor Andrea Mazzino from the University of Genova in Italy, builds on this theory to include how minute fluctuations within the puff behave, and how both large-scale and small-scale dynamics are impacted by changes in temperature and humidity. Their findings were published in Physical Review Letters on Aug. 25, 2021.

Interestingly, the scientists found that at cooler temperatures (15°C or lower), their model deviated from the classical model for turbulence.

In the classical model, turbulence reigns supreme – determining how all the little swirls and eddies within the flow behave. But once temperatures dipped, buoyancy started to have a greater impact.

“The effect of buoyancy was initially very unexpected. It’s a completely new addition to the theory of turbulent puffs,” said Rosti.

Buoyancy exerts an effect when the gas or liquid puff is much warmer than the temperature of the immediate surroundings it is released into. Warm gas or fluid is much less dense than the cold gas or fluid of the environment, and therefore the puff rises, allowing it to travel further.

“Buoyancy generates a very different kind of turbulence – not only do you see changes in the large-scale movement of the puff, but also changes in the minute movements within the puff,” said Rosti.

The scientists used a powerful supercomputer, capable of resolving behavior of the puff at the large-scale and the small-scale, to run simulations of turbulent puffs, which confirmed their new theory.

The new model could now allow scientists to better predict the movement of droplets in the air that are released when someone coughs or speaks unmasked.

While larger droplets fall quickly to the ground, reaching distances of around one meter, smaller droplets can remain airborne for much longer and travel further.

“How fast the droplets evaporate – and therefore how small they are – depends on turbulence, which in turn is affected by the humidity and temperature of the surroundings,” explained Rosti. “We can now start to take these differences in environmental conditions, and how they affect turbulence, into consideration when studying airborne viral transmission.”

Next, the researchers plan to study how puffs behave when made of more complicated non-Newtonian fluids, where how easily the fluid flows can change depending on the forces it is under.

“For COVID, this could be useful for studying sneezes, where non-Newtonian fluids like saliva and mucus are forcefully expelled,” said Rosti.