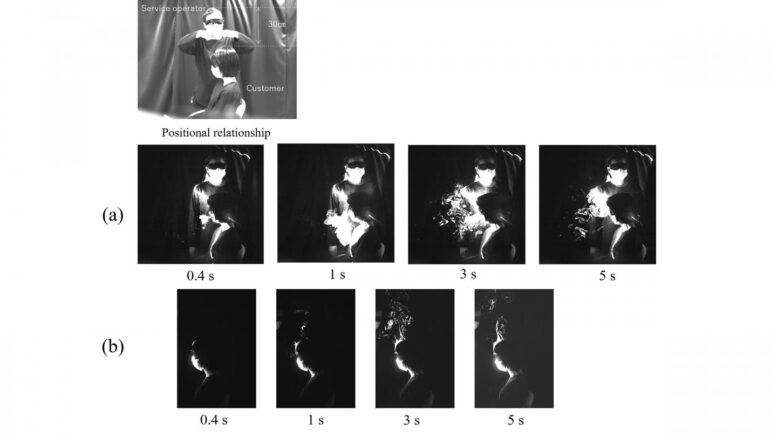 Visualization of airflow patterns between a service technician and a client. Conversation spreads droplets, even when both wear masks. Courtesy of Keiko Ishii

COVID-19 can spread from asymptomatic but infected people through small aerosol droplets in their exhaled breath. Most studies of the flow of exhaled air have focused on coughing or sneezing, which can send aerosols flying long distances.

However, speaking while near one another is also risky since the virus can be ejected by merely talking.

In Physics of Fluids, scientists in Japan use smoke and laser light to study the flow of expelled breath near and around two people conversing in various relative postures commonly found in the service industry, such as in hair salons, medical exam rooms, or long-term care facilities.

In this study, electronic cigarettes were used to produce artificial smoke consisting of droplets about one-tenth micron in diameter, similar to the size of a virus particle. The liquid used in these vaping devices, a mixture of glycerin and propylene glycol, produces a cloud of tiny droplets that scatter light from a laser, allowing visualization of airflow patterns.

"We analyzed the characteristics of exhalation diffusion with and without a mask when a person was standing, sitting, facing down, or lying face up," said author Keiko Ishii.

To study the effect of speech on exhalation, the word "onegaishimasu," a typical Japanese greeting in a business setting, was uttered repeatedly while filming the resulting vapor cloud. The experiments were carried out in a hair salon at the Yamano College of Aesthetics in Tokyo, with postures chosen to simulate typical customer service scenarios, including shampooing where a customer is lying back and the technician is standing and leaning over the customer.

"A significant amount of similar face-to-face contact would occur not only in cosmetology but also in long-term and medical care," said Ishii.

The experiments revealed the exhaled air from an unmasked person who is speaking tends to move downward under the influence of gravity. If a customer or patient is lying below, they could be infected.

The investigators also experimented with face shields and found it can prevent any aerosols that leak from around the technician's mask from traveling down to the customer.

"The face shield promoted the rise of the exhaled breath," said Ishii. "Hence, it is more effective to wear both a mask and a face shield when providing services to customers."

The paper, "Relationship between human exhalation diffusion and posture in face-to-face scenario with utterance," is authored by Keiko Ishii, Yoshiko Ohno, Maiko Oikawa, and Noriko Onishi. The article will appear in Physics of Fluids on Feb. 23, 2021 at https://aip.scitation.org/doi/10.1063/5.0038380