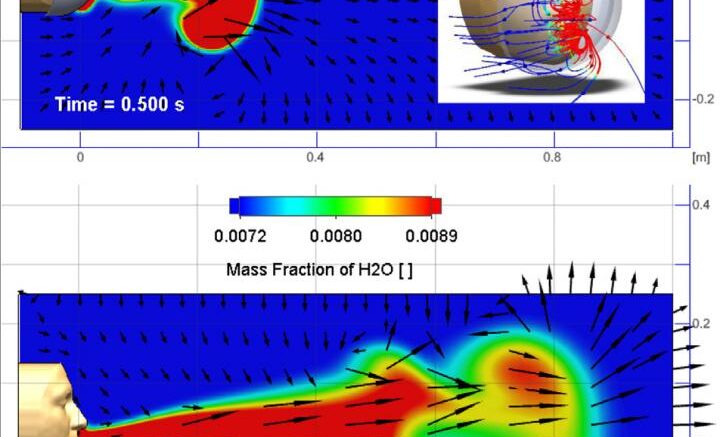 Two groups of researchers at Sandia National Laboratories have published papers on the droplets of liquid sprayed by coughs or sneezes and how far they can travel under different conditions.

Both teams used Sandia's decades of experience with advanced computer simulations studying how liquids and gases move for its nuclear stockpile stewardship mission.

One study used Sandia-developed high-performance computer simulation tools to model coughing with and without a breeze and with and without protective barriers. This work was recently published in the scientific journal Atomization and Sprays.

Stefan Domino, the lead computer scientist on the paper, said his team found that while protective barriers, such as plexiglass partitions in grocery stores, offer protection from larger droplets, very tiny particles can persist in the air for an extended time and travel some distance depending on the environmental conditions.

Separate computer modeling research at Sandia looked at what happens to the smaller aerosol droplets under different conditions, including when a person is wearing a face covering. That study showed that face masks and shields keep even the small droplets from a cough from dispersing great distances, said researcher Cliff Ho, who is leading that effort. This work was published in the journal Applied Mathematical Modelling on Feb. 24.

In simulations run by Domino's team through Sandia's high-performance computers, larger droplets from a cough with no crosswind and no face coverings fell at most approximately three meters, or roughly nine feet away. They also found that the dry "droplet nuclei," or aerosols, left over after the liquid evaporates from a droplet traveled about the same distance but stuck around in the air for the two minutes they modeled.

Add a plexiglass partition into the mix, and their computer simulations showed that larger droplets cling to the barrier, which mitigates the risk of direct transmission, but the smaller droplet nuclei persist in the air, Domino said.

When they added a 10-meter-per-second breeze from the back to the simulation without a barrier, the larger droplets traveled up to 11 1/2 feet and the droplet nuclei traveled farther.

This study does not call into question the social-distancing standard of 6 feet recommended by the Centers for Disease Control and Prevention designed to prevent direct contact from the majority of larger droplets. In a typical cough from an infected person, roughly 35% of the droplets might have the virus present, but models of how much SARS-CoV-2 and its variants are needed to infect another person are still being developed, Domino said.

"A recent review paper on the transmission of SARS-CoV-2 that appeared in the Annals of Internal Medicine suggests that respiratory transmission is the dominant route for transmission. As such, we feel that establishing a credible modeling and simulation tool to model transport of pathogen-containing droplets emanating from coughs and how they persist in public spaces that we all inhabit represents a critical piece of the required science," he said. Partitions, masks, social distancing, staying home when feeling unwell and getting vaccinated are still important to help cut down transmission, especially with the new more transmissible variants.

Domino also conducted computer modeling of outdoor open spaces and found that standing people exposed to a cough from someone in a kneeling position had relatively low risk of exposure compared to people who were seated. This was because of how the droplets and aerosols interact with the complex breezes that move around people. This work was published in the International Journal of Computational Fluid Dynamics on April 1. Domino's simulations used over four million hours of computer processing time and were run on many computer processors at the same time.

Ho used a commercially available fluid dynamics computer model to simulate various events that expel moist fluid, such as coughing, sneezing, talking and even breathing, to understand how they affect transport and transmission of airborne pathogens. He assumed that viral pathogens were aerosolized in tiny droplets and that the pathogen distribution and concentration could be represented by the concentration of the simulated exhaled vapor.

"I introduced spatial and temporal concentrations into the modeling to develop quantified risks of exposure based on separation distance, exposure duration and environmental conditions, such as airflow and face coverings," said Ho. "I could then determine the probability of infection based on spatial and temporal aerosol concentrations, viral load, infectivity rate, viral viability, lung-deposition probability and inhalation rate."

The model also confirmed that wearing a face mask or face shield significantly reduced the forward travel of exhaled vapor and exposure risk by about tenfold. However, the vapor concentrations near the face persisted longer than without face coverings.

The exposure risks decreased with increasing distance, but the greatest increase in benefit was at three feet. Ho's models also quantified the degree that wearing a mask reduces exposure risks at various distances.

In short, the computer modeling confirmed the importance of social distancing and wearing masks. In addition, staying upwind and increasing fresh air ventilation in places like grocery stores, restaurants and schools can help to reduce the exposure risk.

Sandia researchers were able to apply many of the same computational tools used in their nuclear stockpile stewardship mission to simulate droplets from coughs and sneezes, as well as Sandia's advanced high-performance computing resources. For the nuclear deterrence mission, these tools study such things as how turbulent jets, plumes and propellent fires react in different conditions.

"We can deploy our simulation tool capability to other applications," Domino said. "If you look at the physics of a cough or a sneeze, it includes attributes of these physics that we normally study at Sandia. We can simulate the trajectory of droplets and how they interact in the environment."

Those environmental conditions can include variables, such as temperature, humidity, launch trajectory, and crosswind strength and direction. They can also include natural and manmade barriers.

Along with studies done by others on cough spray, Sandia's computer-simulation capabilities add the value of seeing how droplets from a cough will react to different conditions. Sandia's simulation tools combine the mass, momentum and energy of the droplets to capture detailed evaporation physics that support the ability to distinguish between droplets that deposit and those that persist in the environment.