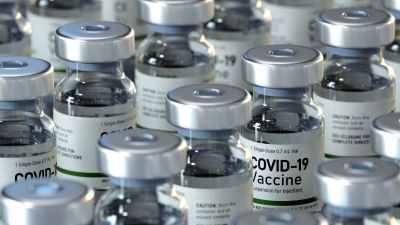 Ahead of the first U.S. emergency use authorization for a COVID-19 vaccine, only half of Americans said they were likely to get vaccinated as soon as possible, according to an in-depth study led by researchers at the Johns Hopkins Bloomberg School of Public Health.

The researchers conducted an online survey of 2,525 Americans in a two-week period from late November to early December, asking them about their intentions regarding COVID-19 vaccination as well as other values and beliefs. About 50 percent responded that they intended to get vaccinated as soon as possible. About 10 percent said they intended not to be vaccinated at all. The remaining 40 percent replied that they probably wouldn't be vaccinated, or probably would be but not as soon as possible.

The findings were published online March 24 in the journal Vaccine.

The authors labeled these groups "intenders" (as soon as possible), "unlikelys" (not at all), and "wait and learn" (maybe not, definitely not as soon as possible). While the numbers may have shifted somewhat as vaccinations rolled out across the U.S. this winter, the authors say outreach should focus on the "wait-and-learn" group, people who expressed an inclination to possibly or eventually get the vaccine, even if it wasn't as soon as possible.

"Once we get the first 50 percent vaccinated, we're going to be left with as many as 40 percent that are unsure, so we need to start working with them now," says study lead author Daniel Salmon, PhD, a professor in the Department of International Health and director of the Institute for Vaccine Safety at the Bloomberg School. "With these survey results, we now understand that critical 40-percent group much better."

Understanding attitudes around vaccines is essential for achieving community or herd immunity which, when enough people have been vaccinated, greatly reduces and controls community transmission and protects even the unvaccinated. Without vaccinating children younger than 16, achieving community immunity for SARS-CoV-2--the virus that causes COVID-19--will require that up to 90 percent of adults get highly effective vaccines. The researchers note that widespread hesitancy about COVID-19 vaccination appears to be a major obstacle to this goal.

Compared to the intenders, those who planned on getting vaccinated as soon as they could, the wait-and-learn group was overall more likely to have lower levels of trust in local, state, and federal public health authorities and health care professionals, along with less confidence in vaccine safety. The wait-and-learn respondents were more likely, for example, to be concerned that governments and drug companies used people "like them" to conduct experiments. "Like them" was intentionally undefined in the survey and could have been interpreted to be age, race, or ethnicity, or a medical condition. They also reported they were more likely to know someone who had a serious reaction to a vaccine.

The survey included 2,525 people, and oversampled African Americans and Hispanics to increase the statistical power of analyses concerning these groups. The results were adjusted to weight different demographic groups according to their true proportions in the U.S. population.

Salmon and colleagues conducted the survey in English and Spanish between November 25 and December 7 of last year, using Ipsos KnowledgePanel®, a panel of thousands of people in United States households who stand ready to take part in polls and surveys. During this survey period, the first successful phase 3 clinical trial results for COVID-19 vaccines had already been announced, but the Food and Drug Administration had not yet approved any of them for emergency use.

"Everything about the 'wait-and-learn' group suggests that there will continue to be challenges," Salmon says. "A near-term approach we see is for public health to work with community leaders to connect with people with low levels of trust in government. COVID-19 vaccines afford the opportunity to work with local communities to build trust and reduce inequities."

In addition, the authors say public health leaders should continue to provide accessible information about side effects, including rare ones that could potentially erode confidence in new COVID-19 vaccines.

This research was supported by the Robert Wood Johnson Foundation and the Horizon Foundation.