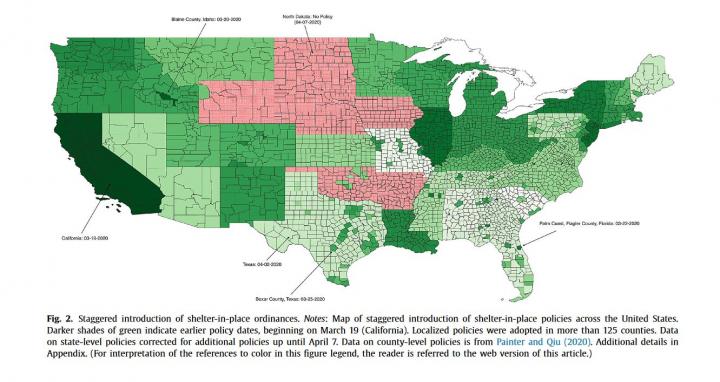 Staggered introduction of shelter-in-place ordinances. States and cities in the spring of 2020 turned first to shelter-in-place ordinances to try to mitigate the spread of the coronavirus. The authors of this study examined large quantities of geolocated cellular phone device use patterns. This information helped them assess compliance with stay-at-home orders. Courtesy of UC San Diego

As case rates of COVID-19 reach new heights across the nation, many states and cities are tightening stay-at-home restrictions to stop the spread. New research suggests that that those suffering from economic hardships are less likely comply with new stay-at-home orders; however, these same U.S. residents would be more likely to adhere to the new public health guidelines if their households received stimulus funds.

The results, published in the Journal of Economic Behavior & Organization, suggest that of the measures taken to address economic dislocation caused by the COVID-19 pandemic, the CARES Act helped reduce an important source of viral spread: social interaction.

In the new paper, researchers from the University of California San Diego School of Global Policy and Strategy and the University of Chicago Harris School of Public Policy sought to accurately measure public willingness to abide by shelter-in-place ordinances first introduced in spring of 2020.

The researchers examined large quantities of geolocated cellular phone device use patterns. The data, provided by the analytics company UNACAST, estimates information such as the number of people who are living in a home, the average time spent at home or outside, and changes in the average distance a user traveled. This information helped the researchers assess compliance with stay-at-home orders.

To determine how economic conditions shape compliance, the researchers compared the cell-phone data to county records containing average household incomes for every county across the U.S. from February through July 2020. They also took account of other factors that might influence county residents' willingness to comply, including how severely each county was hit by the virus, unemployment levels, population density, partisanship and where residents get their news.

"Not surprisingly, impoverished communities exposed to economic dislocation are the least likely to comply with shelter-in-place policies," said co-author Jesse Driscoll, associate professor of political science at UC San Diego's School of Global Policy and Strategy. "The data showed that working-class families -- especially those who had lost jobs or might soon lose them -- were overall much less likely to stay home, since they needed to leave the house to work. The more urgent public policy question going into this winter is whether these behaviors changed when stimulus checks arrived last time."

While some beneficiaries received their checks weeks ahead of when others, the team were able to measure the impact stimulus dollars had on residents from data of recipients who used an electronic banking to deposit the funds, made available by the financial data company Facteus.

The researchers found that local stimulus injections significantly increased social distancing. For every additional dollar per capita a county received, movement temporarily declined by over 1 percent.

The authors conclude, "Targeted economic relief such as direct stimulus transfers and increased unemployment benefits may have limited potential spread of COVID-19 among economically disadvantaged populations."