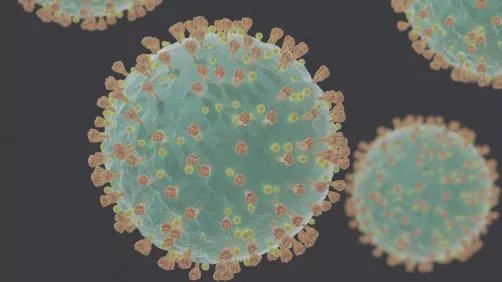 Helping to explain what makes SARS-CoV-2 so capable of infecting human cells, researchers in two independent studies discovered that the virus's spike protein recognizes and binds a protein on the human cell surface called neuropilin-1. This facilitates its ability to enter and infect cells, they suggest. Demonstrating a potential anti-viral treatment, the findings of both studies also describe how the virus's ability to infect human cells through neuropilin-1 can be reduced by inhibitors. Compared to SARS-CoV, which led to a much smaller outbreak in 2003, SARS-CoV-2 spreads rapidly through active pharyngeal viral shedding.

Despite these differences, uptake of both viruses is mediated by the identical cellular receptor, ACE2. One hypothesis to explain the enhanced spreading of SARS-CoV-2 is the presence of a unique cleavage site in the SARS-CoV-2 spike protein, the presence of which could potentially create additional human cell surface receptor binding sites.

In looking at the sequence of the SARS-CoV-2 spike protein, James Daly and colleagues identified the presence of a small sequence of amino acids that appeared to mimic a protein sequence found in human proteins that interacts with neuropilin-1. This led them to propose the spike protein of SARS-CoV-2 associates with neuropilin-1 to aid viral infection, a hypothesis they confirmed with a range of structural and biochemical approaches. As well, by knocking out neuropilin-1 in human cells, and, in another test, using a monoclonal antibody against neuropilin-1, they were able to reduce SARS-CoV-2's ability to infect cells in culture. A second study independently found that neuropilin-1 facilitates SARS-CoV-2 cell entry and infectivity.

In this work Ludovico Cantuti-Castelvetri et al., seeking to inform the reported disturbance of olfaction in a large fraction of COVID-19 patients, analyzed a series of autopsies from six COVID-19 patients. They detected infection of the olfactory epithelium in five out of six. The infected olfactory epithelial cells showed high expression of neuropilin-1, the authors report.

While the focus to date in SARS-CoV-2 entry has been almost entirely on the role of ACE2, Cantuti-Castelvetri et al. note, the expression pattern of ACE2 does not match tissue tropism of SARS-CoV-2. This raises the possibility that co-factors are required to facilitate virus-host cell interactions in cells with low ACE2 expression.