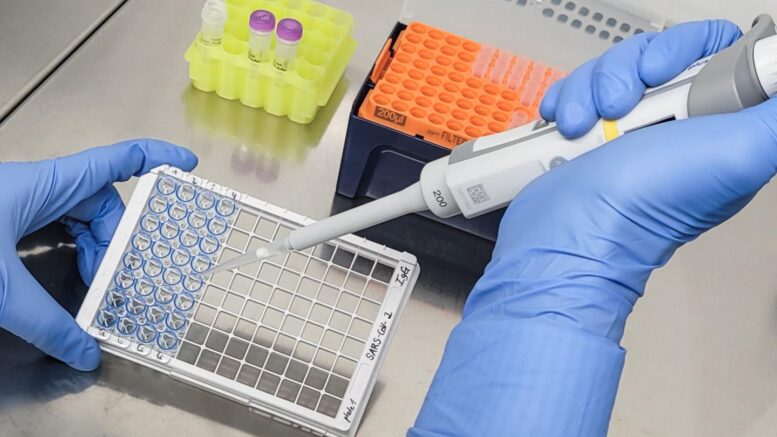 The Charité researchers analyzed blood samples from older and younger individuals who had received their vaccinations, testing for the presence of SARS-CoV-2-specific antibodies (including immunoglobulin G, or IgG). Courtesy of Charité/Victor Corman

SARS-CoV-2 outbreaks involving care homes with fully vaccinated residents have been reported across Germany. In order to gain a better understanding of this phenomenon, a team of researchers from Charité - Universitätsmedizin Berlin used an outbreak at a Berlin-based facility to analyze virus-related data and study the immune responses of elderly residents following vaccination.

The researchers' data, which have been published in Emerging Infectious Diseases, confirm vaccine effectiveness in the elderly. However, they also indicate a delayed and slightly reduced immune response. In light of their findings, the researchers emphasize the need to vaccinate both caregivers and close contacts in order to better protect this high-risk group.

The BioNTech/Pfizer COVID-19 vaccine has demonstrated high levels of efficacy. Pre-approval studies revealed the vaccine to be capable of preventing more than 90 percent of symptomatic SARS-CoV-2 infections just one week after the second dose. The vaccine's efficacy was later confirmed in observational, population-based studies. This efficacy notwithstanding, infections will occasionally develop in vaccinated individuals. But what might explain the occurrence of larger outbreaks in care homes whose residents have been fully vaccinated? What medical experts had suspected based on past experience with other vaccines has now been confirmed by two linked studies, both of which were conducted by an interdisciplinary team of researchers from Charité. These studies showed that the immune system's response to vaccination is less effective in the elderly than it is in younger individuals.

Despite the outbreak, four vaccinated residents remained free of the virus. While containment measures were successful in preventing spread to other areas of the facility, two of the 16 vaccinated COVID-19 patients required hospitalization. One of the hospitalized patients died after suffering a hypertensive crisis resulting in brain hemorrhage. A second patient died in the care home but had tested negative for the virus for more than two weeks prior to her death. As neither of these two patients ever developed respiratory symptoms, the researchers did not suspect a causal link with SARS-CoV-2.

"Vaccination certainly provided protection for the care home residents involved in this outbreak and drastically reduced disease severity," says one of the study's three lead authors, Dr. Victor Corman, who is deputy director of the Department of Virology's National Consultant Laboratory for Coronaviruses and a researcher at the German Center for Infection Research (DZIF). He adds, "It is also likely that the shorter duration of shedding was responsible for preventing further infections. However, the high number of infections seen makes it clear that even where a vaccine has a high level of efficacy, this does not always translate into full protection for the elderly."

According to the researchers, one possible reason for this is that the outbreak was caused by the Alpha variant (previously known as B.1.1.7), which is associated with higher throat viral loads and greater transmissibility. The researchers also identified a second reason: the way in which an individual's immune system responds to vaccination with the BioNTech/Pfizer vaccine.

To test their hypothesis, the researchers compared a cohort of older patients (aged over 70 and registered with a private family practice) with a younger cohort of Charité staff (with an average age of 34). Blood tests taken just three weeks after the first dose revealed that approximately 87 percent of the younger cohort had developed antibodies against SARS-CoV-2. Among the older cohort, the figure was approximately 31 percent. One month after the second dose, almost the entire cohort of young people (99 percent) tested positive for SARS-CoV-2-specific antibodies. Among the older cohort, the figure was approximately 91 percent. Antibodies also take longer to mature in the older age groups, meaning that their ability to bind to the virus was impaired. Even T cell-mediated immunity, the second important branch of the body's immune response, was found to be weaker.

Summing up the team's findings, Dr. Leif Erik Sander, vaccine researcher at Charité's Department of Infectious Diseases and Respiratory Medicine, says, "Our study shows that there is a significant delay in the body's immune response following vaccination in the elderly, and that this response never reaches the levels seen in the young." He adds: "Naturally, one cannot determine the effectiveness of vaccination based on a single outbreak. Since the beginning of the vaccination campaign, there has been a dramatic overall decline in the number of infections seen in care homes. However, occasional outbreaks do happen, and the elderly do appear more susceptible than younger people because their immune response proves slightly weaker."

Emphasizing the significance of the findings, the study's third leading author, Dr. Florian Kurth from the Department of Infectious Diseases and Respiratory Medicine, says, "While only around one in ten fully vaccinated over-70s have no antibodies in their blood, we are not currently in a position to identify individuals with low vaccine-induced immunity. Therefore, if we are to protect this high-risk group, we cannot rely on vaccination alone. Given that large sections of the population remain without immunity, both infection control measures and testing will continue to play an important role in the immediate future. Naturally, the vaccination of both care staff and visitors will be of crucial importance in order to prevent future outbreaks in care homes. Before too long, we are also likely to see booster shots which could be used to help improve immunity in the elderly."