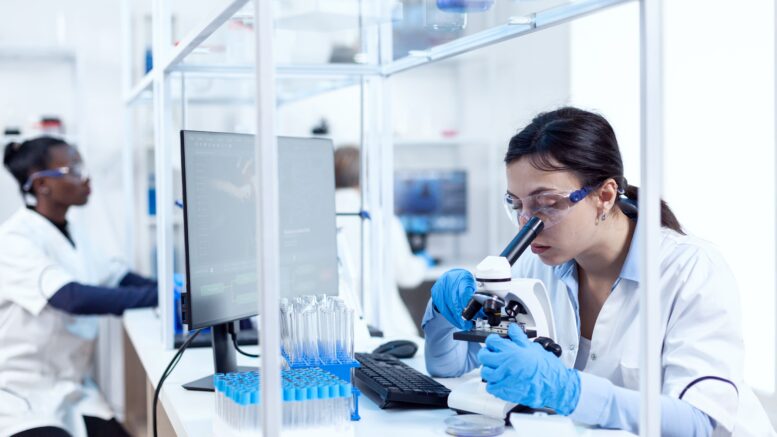 New research at the University of Chicago has found differences in immune pathway activation to influenza infection between individuals of European and African genetic ancestry. Many of the genes that were associated with these differences in the immune response to the flu are also enriched among genes that correlate with COVID-19 disease severity. The study was published on November 26 in Science.

“The lab has been interested in understanding how individuals from diverse populations respond differently to infectious diseases,” said first author Haley Randolph, a graduate student at UChicago. “In this study, we wanted to look at the differences in how various cell types respond to viral infection.”

Using single-cell RNA-sequencing, the researchers were able to examine gene expression patterns in peripheral mononuclear blood cells, a diverse set of specialized immune cells that play important roles in the body’s response to infection. They collected these cells from men of European and African ancestry and then exposed the cells to flu in a laboratory setting. This allowed the team to examine the gene signatures of a variety of immune cell types and determine how infection with the flu virus affected each cell type’s gene expression.

The results showed that individuals of European ancestry showed an increase in type I interferon pathway activity during early influenza infection.

“Interferons are proteins that are critical for fighting viral infections,” said senior author Luis Barreiro, PhD, Associate Professor of Medicine at UChicago. “In COVID-19, for example, the type I interferon response has been associated with differences in the severity of the disease.”

What’s more, this increased pathway activation was correlated with greater capacity to hinder the replication of the virus and a greater capacity to limit viral replication at a later time point. “Inducing a strong type I interferon pathway response early upon infection stops the virus from replicating and may therefore have a direct impact on the body’s ability to control the virus,” said Barreiro. “Unexpectedly, this central pathway to our defense against viruses appears to be amongst the most divergent between individuals from African and European ancestry.”

The researchers saw a variety of differences in gene expression across different cell types, indicating that the immune response variation can’t be isolated to a single type of immune cell, but rather connects a constellation of cells that work together to fight disease.

Such a difference in immune pathway activation could contribute to disparities in influenza outcomes between different racial groups; Non-Hispanic Black Americans are more likely to be hospitalized due to the flu than any other racial group.

However, the researchers are quick to point out that these results are not evidence for genetic differences in disease susceptibility. Instead, other environmental and lifestyle factors that may differ between racial groups could be influencing gene expression, which may in turn affect the immune response.

“There’s a strong relationship between the interferon response and the proportion of the genome that is of African ancestry, which might make you think it’s genetic, but it’s not that simple,” said Barreiro. “Genetic ancestry also correlates with environmental differences. A lot of what we’re capturing could be the result of other disparities in our society, such as systemic racism and healthcare inequities. Although some of the differences we show in the paper can be linked to specific genetic variation, showing that genetics do play some role, such genetic differences are not enough to fully explain the differences in the interferon response.”

These differences in susceptibility to viral infection may extend beyond the flu virus; When the researchers compared a list of genes associated with differences in the severity of COVID-19 disease, many of the same genes showed significant differences in their expression after flu infection between individuals of African and European ancestry.

“We didn’t study COVID-19 patient samples as part of this study, but the overlap between these gene sets suggests that there may be some underlying biological differences, influenced by genetic ancestry and environmental effects, that might explain the disparities we see in COVID-19 outcomes,” said Barreiro.

The researchers are exploring this and other related questions in more details. The hope, they say, is to figure out which factors contribute to the differences in the interferon response, and immune responses more broadly, to better predict individual disease risk.

The study, “Genetic ancestry effects on the response to viral infection are pervasive but cell type specific,” was supported by the National Institutes of Health (R01-GM134376) and the National Science Foundation (DGE-1746045). Additional authors include Mari Shiratori and João Barroso-Batista of UChicago and Jessica K. Fiege, Beth K. Thielen, Clayton K. Mickelson, and Ryan A. Langlois of the University of Minnesota.