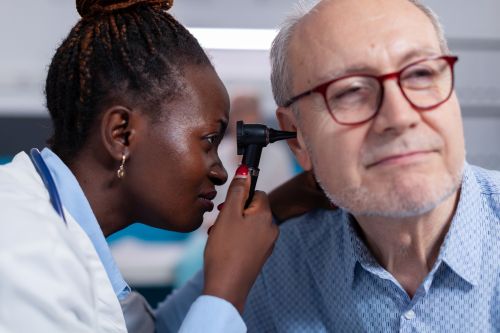 Many Covid-19 patients have reported symptoms affecting the ears, including hearing loss and tinnitus. Dizziness and balance problems can also occur, suggesting that the SARS-CoV-2 virus may be able to infect the inner ear.

A new study from MIT and Massachusetts Eye and Ear provides evidence that the virus can indeed infect cells of the inner ear, including hair cells, which are critical for both hearing and balance. The researchers also found that the pattern of infection seen in human inner ear tissue is consistent with the symptoms seen in a study of 10 Covid-19 patients who reported a variety of ear-related symptoms.

The researchers used novel cellular models of the human inner ear that they developed, as well as hard-to-obtain adult human inner ear tissue, for their studies. The limited availability of such tissue has hindered previous studies of Covid-19 and other viruses that can cause hearing loss.

“Having the models is the first step, and this work opens a path now for working with not only SARS-CoV-2 but also other viruses that affect hearing,” says Lee Gehrke, the Hermann L.F. von Helmholtz Professor in MIT’s Institute for Medical Engineering and Science, who co-led the study.

Konstantina Stankovic, a former associate professor at Harvard Medical School and former chief of otology and neurotology at Massachusetts Eye and Ear, who is now the Bertarelli Foundation Professor and chair of the Department of Otolaryngology – Head and Neck Surgery at Stanford University School of Medicine, co-led the study. Minjin Jeong, a former postdoc in Stankovic’s laboratory at Harvard Medical School, who is now at Stanford Medical School, is the lead author of the paper, which appears today in Communications Medicine.

Before the Covid-19 pandemic began, Gehrke and Stankovic began working together on a project to develop cellular models to study infections of the human inner ear. Viruses such as cytomegalovirus, mumps virus, and hepatitis viruses can all cause deafness, but exactly how they do so is not well-understood.

In early 2020, after the SARS-CoV-2 virus emerged, the researchers altered their plans. At Massachusetts Eye and Ear, Stankovic started to see patients who were experiencing hearing loss, tinnitus, and dizziness, who had tested positive for Covid-19. “It was very unclear at the time whether this was causally related or coincidental, because hearing loss and tinnitus are so common,” she recalls.

She and Gehrke decided to use the model system they were working on to study infection of SARS-CoV-2. They created their cellular models by taking human skin cells and transforming them into induced pluripotent stem cells. Then, they were able to stimulate those cells to differentiate into several types of cells found in the inner ear: hair cells, supporting cells, nerve fibers, and Schwann cells, which insulate neurons.

These cells could be grown in a flat, two-dimensional layer or organized into three-dimensional organoids. In addition, the researchers were able to obtain samples of hard-to-obtain inner ear tissue from patients who were undergoing surgery for a disorder that causes severe attacks of vertigo or for a tumor that causes hearing loss and dizziness.

In both the human inner ear samples and the stem-cell-derived cellular models, the researchers found that certain types of cells — hair cells and Schwann cells — express the proteins that are needed for the SARS-CoV-2 virus to enter the cells. These proteins include the ACE2 receptor, which is found on cell surfaces, and two enzymes called furin and transmembrane protease serine 2, which help the virus to fuse with the host cell.

The researchers then showed that the virus can actually infect the inner ear, specifically the hair cells and, to a lesser degree, Schwann cells. They found that the other cell types in their models were not susceptible to SARS-CoV-2 infection.

The pattern of infection that the researchers found in their tissue samples appears to correspond to the symptoms observed in a group of 10 Covid-19 patients who reported ear-related symptoms following their infection. Nine of these patients suffered from tinnitus, six experienced vertigo, and all experienced mild to profound hearing loss.

Damage to cochlear hair cells, which can cause hearing loss, is usually evaluated by measuring otoacoustic emissions — sounds given off by sensory hair cells as they respond to auditory stimulation. Among the six Covid-19 patients in the study who underwent this testing, all had reduced or absent otoacoustic emissions.

While this study strongly suggests that Covid-19 can cause auditory and balance problems, the overall percentage of Covid-19 patients who have experienced ear-related issues is not known.

“Initially this was because routine testing was not readily available for patients who were diagnosed with Covid, and also, when patients were having more life-threatening complications, they weren’t paying much attention to whether their hearing was reduced or whether they had tinnitus,” Stankovic says. “We still don't know what the incidence is, but our findings really call for increased attention to audiovestibular symptoms in people with Covid exposure.”

Possible routes for the virus to enter the ears include the Eustachian tube, which connects the nose to the middle ear. The virus may also be able to escape from the nose through small openings surrounding the olfactory nerves, Stankovic says. That would allow it to enter the brain space and infect cranial nerves, including the one that connects to the inner ear.

The researchers now hope to use their human cellular models to test possible treatments for the inner ear infections caused by SARS-CoV-2 and other viruses.