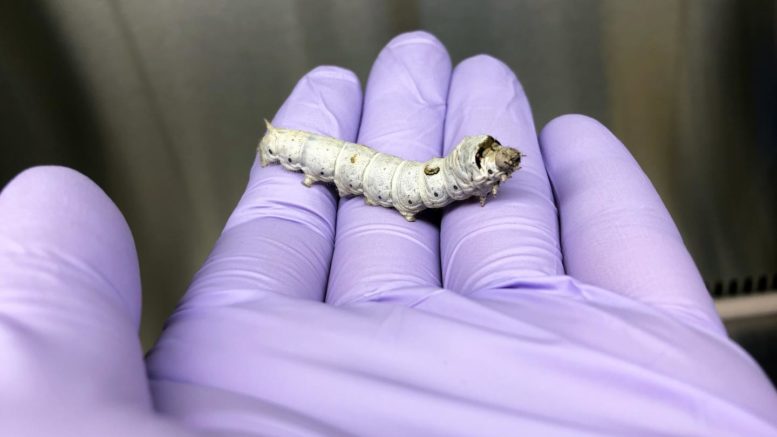 To find out, professor Chikara Kaito and his team of scientists from Okayama University, Japan, used a process called experimental evolution to identify molecular mechanisms that cells develop to gain useful traits, and published their findings in PLoS Pathogens. "We're excited by this research because no one has ever looked at virulence evolution of bacteria in an animal; studies before us looked at the evolution in cells," said Kaito.

The scientists decided to start with a non-pathogenic Escherichia coli and repeatedly mutate it and use it to infect silkworms, an insect that is often used as a model for infectious diseases, and then test whether it will cause death in silkworms.

Through this experiment, the scientists created E. coli strains with a 500-fold increased virulence compared to the original bacterial strain and found that mutations in the gene that code for one specific protein, the "lipopolysaccharide transporter (LPS) transporter," was one of the reasons for the increased virulence. This protein forms a part of the bacterial cell membrane and protects the bacteria from harm. Because of this, the LPS transporter is necessary for E. coli to grow.

The mutations that increased bacterial deadliness appeared to give E. coli resistance against some antibiotics, as well as some antibacterial substances from the silkworms. The reason for this is likely a corresponding increase in the concentration of structures called outer membrane vesicles, which the bacteria release to absorb harmful compounds to prevent them from entering the bacteria and harming them.

Researchers also identified the characteristics of substances that pathogenic strains were resistant to, showing that they were "hydrophobic" (or water-repelling) and positively charged. This fit with the increased amount of outer membrane vesicles, which are hydrophobic and negatively charged, allowing them to hold onto those substances (because, of course, opposite forces attract). The scientists also showed that the mutations occurred in parts of LPS transporter that are directly on the outside of the bacterial membrane. The scientists suspect that this is because these areas are more exposed to the environment, thereby experience more natural selection, and are thereby more susceptible to mutation.

"What we've done here is identify several things about pathogenic bacteria," explains Kaito. "We showed for the first time that mutations to LPS transporter can increase virulence, and we provided evidence for how that virulence actually happens--the mutant bacteria make more outer membrane vesicles." And that's not all, the team also pinpointed specific structural changes to mutated LPS transporter that could explain why virulence is different across bacteria--because each species might have a different structure.

When asked about how his work contributes to scientific understanding and to medicine, Kaito elaborates, "Before our study, it wasn't very clear how bacteria actually evolved properties that made them more harmful, so our study helps clarify this. An understanding of this process means the possibility of creating drugs or other therapy that can keep bacteria from becoming pathogenic, especially if we find more proteins like LPS transporter, where mutations can have such a big effect."

Of course, further studies are needed to explore whether the mutations observed in this study will also increase virulence when the bacteria infect animals bigger than silkworms, like mammals. But this study is definitely the first step toward unraveling the mystery of differences between dangerous and harmless bacteria.

Be the first to comment on "Study Pinpoints Mutation That Makes E. coli Deadlier"