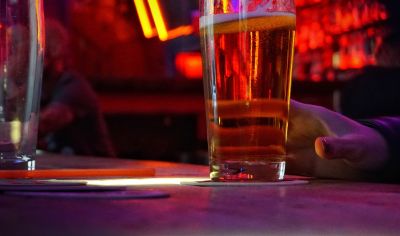 Led by the University of Stirling, the research was conducted in May to August last year in a wide range of licensed premises which re-opened after a nationwide lockdown, and were operating under detailed guidance from government intended to reduce transmission risks.

While observed venues had made physical and operational modifications on re-opening, researchers found that practices were variable and a number of incidents of greater concern were observed -- these included close physical interaction between customers and with staff, which frequently involved alcohol intoxication and were rarely effectively stopped by staff.

The new study -- published in the Journal of Studies on Alcohol and Drugs -- is the first in the world to examine the operation of COVID-19 measures in licensed premises and its findings will inform governments, public health experts, and policymakers in the UK and other countries as they consider the impact of the pandemic on hospitality and the risks of lifting restrictions.

Professor Niamh Fitzgerald, director of the University of Stirling's Institute for Social Marketing and Health, led the research, which was funded by the Scottish Government Chief Scientist Office.

Fitzgerald said, "Our study explored and observed business practices and behaviours of customers and staff in licensed premises in summer 2020 with a view to understanding if and how COVID-19 transmission risks could be managed in settings where alcohol is served. We interviewed business owners and representatives prior to re-opening to understand the challenges being faced. When pubs reopened last July, following the initial UK lockdown, our team visited premises to observe how government measures designed to reduce transmission risks in hospitality settings were working in practice, including any incidents likely to increase those risks. Businesses expressed an intention to work within the guidance, but there were commercial and practical challenges to making this a reality. Upon re-opening, substantial efforts to change the layout of bars were observed and appeared to be working well in many premises, but problems were common including staff not wearing personal protective equipment, or with the management of toilets, queues and other 'pinch points'. We also observed several incidents of greater concern -including customers shouting, embracing or repeatedly interacting closely with several households and staff - which were rarely addressed by staff. We concluded that, despite the efforts of bar operators and guidance from government, potentially significant risks of COVID-19 transmission persisted in at least a substantial minority of observed bars, especially when customers were intoxicated. Closures of premises can eliminate these risks, but also cause significant hardship for business owners and staff."

The UK entered national lockdown on March 20 last year. In Scotland, licensed premises were permitted to reopen indoor spaces from July 15, with strict safety rules in place to minimize the risk of transmission. Premises operating to a one-metre physical distancing limit had to install appropriate signage, all customers had to be seated, staff had to wear face coverings, and improved ventilation and noise reduction measures had to be introduced. Following a large outbreak in early August linked to licensed premises in Aberdeen, it was made a legal requirement for customer details to be collected for contact tracing, and guidance was strengthened around queuing, standing and table service.

Prior to the restrictions being lifted, the research team conducted interviews with stakeholders -- including representatives from major relevant Scottish and UK trade associations  -- to gauge the sector's thoughts and feelings around implementing COVID-19 measures in licensed premises.

While businesses expressed a willingness to work within government guidance to protect customers and staff, support consumer confidence and enable a return to trading, the interviews - conducted in May and June - also identified commercial challenges of doing so, including financial implications and a risk of compromising the customer experience.

Interviewees felt that there were factors that would help moderate transmission risks, including existing legal requirements on premises (for example, prohibition on selling to drunk customers); industry expertise in managing customer behavior, including drunkenness; new norms such as allowing table service only; and public anxiety around COVID-19 generally leading to more responsible behaviors. They acknowledged that staff would need to be trained and skilled in implementing the new measures - but also felt that some customers may not appreciate, or respond to, intervention.

Twenty-nine observations of licensed premises took place in July and August, with the researchers monitoring premises for up to two hours while posing as customers. The study found that:

A wide range of incidents with potential to increase transmission risk were observed in all but three venues, with multiple incidents reported in most. Incidents deemed to be of greater concern - due to the repeated or continuous nature of the potential risk, the large number of customers involved, or the involvement of staff - were observed in eleven venues. These included: various combinations of singing, shouting or playing music; mixing between groups; standing and moving around the bar without distancing; customers taking photographs with other customers and staff; shaking hands or embracing others who did not appear to be in their household. Notably, in all but one of the venues visited in August, customers were witnessed singing loudly or shouting, and with just one example of effective staff intervention to suppress customer noise.

The research team identified factors which interacted to give rise to the more serious incidents, including: physical set up and operation of premises, a social atmosphere, customer behavior, alcohol consumption and staff practices. All but one of these incidents were observed in the evening; all but two occurred in premises located in a town or village, rather than a city; all but three allowed bar service (rather than table service only); and customers often appeared to be regulars.

In the majority of premises, no staff intervention in incidents or attempts to enforce restrictions were observed. In some cases, staff intervened in a light-hearted way - for example, by gently or playfully reprimanding customers - but such interventions were largely ineffective. Enforcement by external agencies - such as environmental health or police officers - was not observed in any of the venues.

The research report notes that Scottish Government guidance does not go into detail on exactly how bar or security staff might be expected to effectively and safely intervene in customer breaches of distancing, or in the management of situations which would normally require close contact between customers and staff - such as the removal of very drunk or belligerent customers from the premises.

Fitzgerald said, "Our study makes a unique contribution by providing the first evidence, including direct observation data, of how premises operated in practice when allowed to reopen during the COVID-19 pandemic. Overall, our findings suggest grounds for uncertainty about the extent to which new rules can be consistently and effectively implemented in a sector where interaction between tables, households and strangers is the norm, and alcohol is routinely consumed. Despite the efforts of licensed premises, and detailed guidance from Government, potentially significant risks of COVID-19 transmission persisted in a substantial minority of observed bars - especially when customers were intoxicated. Blanket closures, curfews or alcohol sales bans are more likely to be deemed necessary to control virus spread, if such risks cannot be acceptably, quickly and cost-effectively reduced through support and/or sanctions for premises operators. Such blanket actions may also have benefits in terms of protecting staff from occupational exposure and reducing pressure on emergency services from alcohol-related injuries or disorder. However, attention also needs to be paid to the impact of closures on businesses, economic activity, employee hardship, and ownership patterns in the sector, as well as any risks posed by diversion of some drinking to the home."