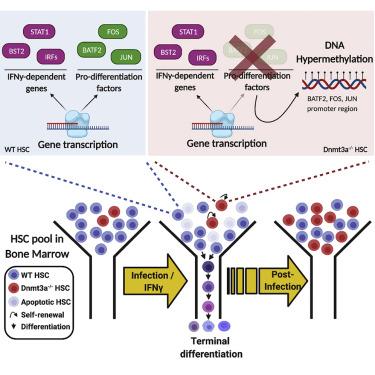 Humans are born with tens of thousands of hematopoietic stem cells (HSCs) that collectively ensure lifelong production of blood and immune cells that protect us from infections. HSCs can either duplicate to produce more stem cell progeny or differentiate to produce distinct immune cell lineages, an extremely critical decision that ensures that the body achieves the fine balance between having enough immune cells to fight invaders while still retaining enough HSCs to maintain future blood production. As we age, HSCs accumulate mutations that lead to the emergence of genetically distinct subpopulations. This common phenomenon known as clonal hematopoiesis (CH) is known to start in early fifties and is frequently associated with loss of function mutations in the DNMT3A gene. CH is associated with a significantly higher risk of blood cancers, cardiovascular disease, stroke and all-cause mortality.

A study led by Dr. Katherine King, associate professor at Baylor College of Medicine and Texas Children's Hospital, shows for the first time that long-term infection and chronic inflammation drive CH mediated by the loss of Dnmt3a function. In addition, the study offers key insights into the mechanism by which chronic inflammation leads to CH and demonstrates the critical role of DNMT3a in regulating normal HSC responses to infections. The study was published in the journal Cell Stem Cell.

"Previously, we showed that chronic infection significantly impairs the ability of wild-type HSCs to remain in a quiescent stem cell state. Prolonged (lasting several months) exposure to a systemic bacterial infection promoted extensive differentiation of HSCs. While this produced sufficient immune cells to fight the infection, it also reduced the number of bone marrow HSCs by 90%," King said. "In contrast, HSCs in mice lacking Dnmt3a gene did not differentiate much. In fact, they underwent self-renewal to produce more HSCs. We undertook the current study to test our prediction that defective differentiation and increased duplication of Dnmt3a HSCs allows them to overtake and outcompete normal HSCs when fighting chronic infections or facing long-term inflammatory conditions."

To test their hypothesis, researchers used a combination of experimental and mathematical modeling experiments to test how HSCs from Dnmt3a mutant mice respond to long-term infection and chronic inflammation. For experimental validation, they generated mosaic mice that were generated by transplanting a mixture of whole bone marrow from Dnmt3a-mutant mice and normal mice into irradiated mice, which allowed them to track how each subpopulation of HSC contracts or grows relative to one another over time when infected for several months with Mycobacterium avium bacteria.

A number of viral or bacterial infections and chronic inflammatory stress conditions including tuberculosis, hepatitis, herpetic infections, and inflammatory bowel disease trigger the release of interferon gamma (IFNγ) by the immune system, which in turn, initiates a cascade of protective immune responses. The team found that compared to wild-type HSCs, Dnmt3a-loss of function HSCs exhibited an entirely opposite set of cellular responses and global changes in gene expression patterns in response to IFNγ, which tended towards preserving or even increasing the numbers of stem cells at the expense of mounting an effective response against imminent invaders or stress.

"We are excited by the findings of this study which opens several areas of future investigations. We have shown for the first time how chronic inflammation due to long-term infections or autoimmune conditions such as rheumatoid arthritis, ulcerative colitis or Crohn's disease dampen the body's immune response as we age. Moreover, it sheds light on the critically important role of DNMT3a in modulating immune responses during chronic infection or stress and also explains how aging and inflammation are linked to blood cancers," King concluded.

Other authors involved in the study are Daniel Hormaechea-Agulla, Katie Matatall, Duy Le, Grant Challen, and Marek Kimmel. They are affiliated with one or more institutions: Baylor College of Medicine, Rice University, Silesian University of Technology, and Washington University School of Medicine. Grants from the National Institutes of Health, Dan L. Duncan Cancer Center, and Polish National Science Center supported this work.