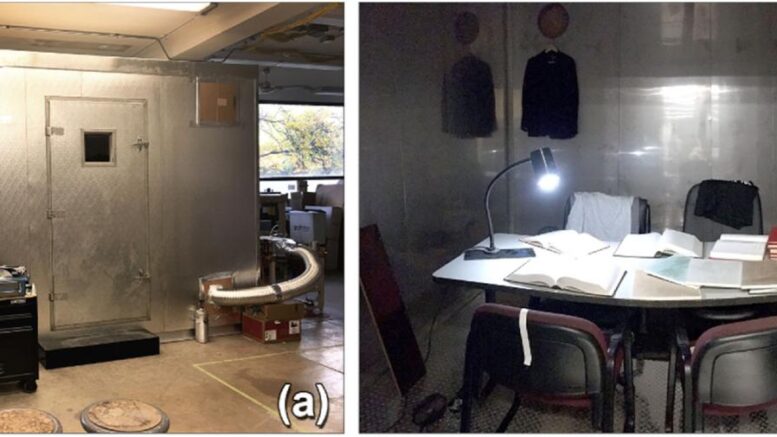 The environmental test chamber where researchers conducted air purifier experiments. (a) is the exterior with instruments set up outside, and (b) is inside the chamber with mock-up furnishings and materials. Courtesy of Illinois Tech

The market for air purifiers is booming, but a new study has found that some air cleaning technologies marketed for COVID-19 may be ineffective and have unintended health consequences.

Both chamber and field tests found that an ionizing device led to a decrease in some volatile organic compounds (VOCs) including xylenes, but an increase in others, most prominently oxygenated VOCs (e.g., acetone, ethanol) and toluene, substances commonly found in paints, paint strippers, aerosol sprays and pesticides. According to the EPA, exposure to VOCs has been linked to a range of health effects from eye, nose and throat irritation, headaches, loss of coordination and nausea, to damage to liver, kidney and central nervous system, and some organics can cause cancer in animals, some are suspected or known to cause cancer in humans.

The study, published this week in Building and Environment, mimicked real-world operating conditions for these ionization devices to test the effectiveness and potential to form chemical byproducts in environments similar to where we all live, work, and learn.

One of the most popular types of air purifiers on the market right now are ion-generating systems, including 'bipolar ionization' devices that electrically charge particles so they settle out of the air faster, and are generally marketed to kill bacteria, fungi, and viruses.

Understandably, the "virus-killing" capability has drawn attention and been heavily featured in advertising over the past year and led to a flood of new and revamped products on the market.

However, the study finds that the air purifier marketplace is fraught with inadequate test standards, confusing terminology, and a lack of peer-reviewed studies of their effectiveness and safety. Unlike air filtration (where air is pushed through a filter to remove airborne pollutants), there has been very little research on the effectiveness and side effects of "additive" air cleaning methods like ionizing devices.

"Manufacturers and third-party test labs commonly demonstrate their product's effectiveness using chamber tests, but these test reports often don't use experimental conditions that could show how the device actually performs in real-world conditions," said Brent Stephens, chair of the Department of Civil, Architectural, and Environmental Engineering at Illinois Tech. "To the extent that there are testing standards for ionization and other devices, those are largely industry-led standards that remain underdeveloped at this point, focused mostly on ensuring just one pollutant, ozone, is not generated during operation."

In everyday operating conditions, ions added to occupied environments such as a school or office building can react with other compounds present in indoor air, which can potentially lead to the formation of harmful byproducts such as formaldehyde and ozone. Ions can also rapidly bind to other gases and spur the formation of new 'ultrafine' particles, which are known air pollutants. But little independent data exists on these mechanisms.

The research team conducted a series of experiments on the operation of a commercially available in-duct bipolar ionization device. Lab tests were conducted with air sampling of particulate matter and gases in a large semi-furnished chamber and in a field test with an ionizer device installed in an air handling unit serving an occupied office building. The research also found that despite small changes in particle concentrations, there was very little net effect on the overall concentration of PM2.5 in the air.

According to the EPA, particulate matter contains microscopic solids or liquid droplets that are so small that they can be inhaled and cause serious health problems. Particles less than 2.5 micrometers in diameter, also known as fine particles or PM2.5, pose the greatest risk to health as they can get deep into your lungs and some may even get into your bloodstream. Numerous scientific studies have linked fine particle pollution exposure to a range of health impacts, including premature death in people with heart or lung disease, nonfatal heart attacks, irregular heartbeat, aggravated asthma, decreased lung function, irritation of the airways, coughing or difficulty breathing.

Health impacts of air ionizers are largely unknown, although a small number of recent studies give cause for concern. In August 2020, a study concluded that exposure to negative ions was associated with increased systemic oxidative stress levels (a marker of cardiovascular health), and despite reduced indoor particulate matter concentrations, there were no beneficial changes to respiratory health.

Another recent study of air ionizers in school classrooms reduced particulate matter concentrations led to some improvements in respiratory health among 11-14 year old children, the ionizers had an adverse effect on heart rate variability (a measure of cardiovascular health), meaning that any benefit to the lungs came at a cost to the heart.

"We should have a much better understanding of these effects before widespread use of these types of devices," said Delphine Farmer, associate professor in the Department of Chemistry at Colorado State University and a co-lead author of the paper.

"Without peer-reviewed research into the health impacts of these devices, we risk substituting one harmful agent for another," said Stephens. "We urge others to follow guidance from organizations like the U.S. EPA and ASHRAE, which generally recommend the use of established, evidence-based measures to clean indoor air, including high efficiency particle filtration and enhanced ventilation, in addition to face coverings and physical distancing, to help reduce airborne transmission of COVID-19."

1 Comment on "Study Uncovers Safety Concerns With Some Air Purifiers"