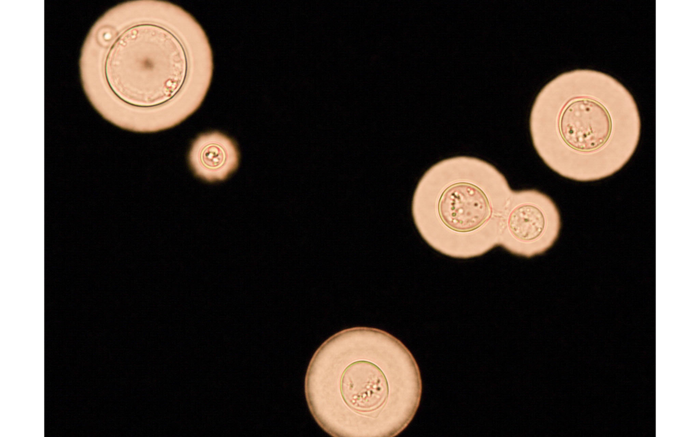 This image shows typical spherical to oval cells of the fungus Cryptococcus neoformans, with extensive capsules and a budding daughter cell. Courtesy of Phan Hai Trieu

Hopes that tamoxifen could improve survival for a deadly form of fungal meningitis have been dashed by clinical trial results published in eLife.

The study finds that adding tamoxifen to standard antifungal treatment was no better at speeding up the clearance of fungal infection from the spinal fluid of people with meningitis. More patients who received tamoxifen had evidence of conduction disturbances in their hearts, although there was no difference in the rates of severe side effects between study groups.

Cryptococcal meningitis is a leading cause of death in people with HIV, but also affects those without HIV, regardless of whether they are immunocompromised. Most infections are caused by a fungus called Cryptococcus neoformans (C. neoformans) and occur in low-income tropical settings. The gold-standard treatment is a combination of three drugs: flucytosine and amphotericin B initially, followed by fluconazole. Yet, even on this gold-standard therapy, a third of patients die within 10 weeks of being diagnosed. Moreover, the drug flucytosine is severely restricted by availability and cost, meaning it is rarely used where the disease burden is highest.

“Tamoxifen has shown antifungal activity against various yeasts in the lab; we subsequently showed that it acts synergistically with amphotericin against two-thirds of clinical Cryptococcus isolates from our archive. As a well-understood, off-patent, cheap and widely available medicine, it was a promising candidate for treating cryptococcal meningitis,” explains co-first author Nguyen Thi Thuy Ngan, a clinician at the Department of Tropical Medicine, Cho Ray Hospital, and the Oxford University Clinical Research Unit (OUCRU), Ho Chi Minh City, Vietnam.

“We designed a randomized trial to determine whether using these drugs in combination could improve the speed of clearance of Cryptococcus from patients with meningitis with and without HIV,” adds co-first author Nhat Thanh Hoang Le, a biostatistician at OUCRU.

The trial involved 50 patients – 40 had HIV and 10 did not. Of the patients, 24 were assigned to receive a standard anti-fungal treatment of amphotericin B and fluconazole plus tamoxifen, and 26 received the standard anti-fungal treatment only. The team measured the Early Fungicidal Activity (EFA) for both groups – that is, how quickly there was a decline in the amount of C. neoformans in a patient's spinal fluid in the two weeks following treatment.

Based on their prior experiments, the team had hoped to see better EFA for patients who had tamoxifen added to the antifungal treatment. However, there was no detectable difference in EFA.

The only difference seen between the two treatment groups was the increased heart toxicity in the tamoxifen group. Studies in the lab had shown that a tamoxifen dose 5–10 times higher than that used routinely in breast cancer would be needed to have an antifungal effect. But a high dose of tamoxifen is known to cause an effect on the heart called QT prolongation – an abnormality that can cause cardiac arrest. There was one sudden death in the tamoxifen group in this study, although this occurred after the period of tamoxifen administration and it was not associated with an abnormal heart rhythm.

“Despite its apparent anti-cryptococcal effect and synergy with other drugs, tamoxifen does not increase the rate of clearance of yeast from spinal fluid in people with meningitis and is unlikely to result in clinical benefit,” concludes senior author Jeremy Day, head of the CNS and HIV Infections Research Group at OUCRU, and professor of infectious diseases at the Centre for Tropical Medicine and Global Health, Oxford University, UK.

“Our results show the importance of small-scale trials such as this for rapidly evaluating re-purposable drugs and preventing the time and cost of a larger clinical study that is likely to fail. However, sadly this does mean that we urgently still need new, specific anti-cryptococcal drugs to be developed, and we also need to ensure that existing, available treatments are made accessible and affordable.”