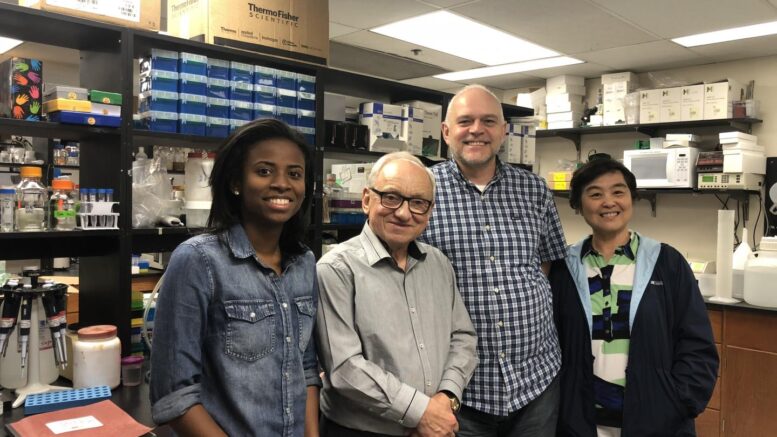 A cell-penetrating peptide developed by researchers at Vanderbilt University Medical Center can prevent, in an animal model, the often-fatal septic shock that can result from bacterial and viral infections.

Their findings, published this week in Scientific Reports, could lead to a way to protect patients at highest risk for severe complications and death from out-of-control inflammatory responses to microbial infections, including COVID-19.

"Life-threatening microbial inflammation hits harder (in) patients with metabolic syndrome, a condition afflicting millions of people in the United States and worldwide," said the paper's corresponding author, Jacek Hawiger, MD, PhD, the Louise B. McGavock Chair in Medicine and Distinguished Professor of Medicine at VUMC.

An international authority on inflammation as the mechanism of multiple diseases, Hawiger also is professor of Molecular Physiology and Biophysics at Vanderbilt and a Health Research Scientist at the Nashville Veterans Affairs (VA) Medical Center.

"We explore the pathways to the cell's nucleus, the command center of inflammation," he said.

In response to bacterial infection, transcription factors are ferried to the nucleus of immune and vascular cells, where they reprogram gene expression to ramp up production of infection-fighting inflammatory molecules. Like a wildfire, however, the inflammatory response, if unchecked, can damage small blood vessels, leading to multiple organ failure and death.

Patients with pre-existing health conditions, including obesity and high blood levels of glucose (diabetes), triglycerides and cholesterol (hyperlipidemia) -- hallmarks of metabolic syndrome -- are at increased risk of developing a damaging inflammatory response to infection.

They also are more likely to die of complications of COVID-19, which include acute respiratory distress syndrome, septic cardiomyopathy (damage to heart muscle), microvascular thrombosis (tiny blood clots) and acute kidney injury. These complications result from infection-induced septic shock due to the collapse of small blood vessels. Pre-existing conditions, notably hyperlipidemia, already can cause inflammation in these small vessels. Infection, the researchers reasoned, may only make it worse.

In 2014 Hawiger and colleagues developed a cell-penetrating peptide, or protein fragment, that blocked signaling pathways leading to lethal shock in animals exposed to the endotoxin lipopolysaccharide (LPS), which is released during infection by Gram-negative bacteria.

This "parent" peptide, called cSN50.1, selectively suppressed the transport into the nucleus of transcription factors responsible for the out-of-control inflammatory response, and dramatically increased survival in mice exposed to high doses of LPS.

In a 2017 the Hawiger team used a polymicrobial sepsis model to show that the same treatment combined with an antibiotic increased survival in mice from 30% (using antibiotic alone) to 55%.

In 2019 the U.S. Food and Drug Administration designated the peptide as an "Investigational New Drug" and allowed a clinical trial in an inflammatory skin disease sponsored by Amytrx, a start-up company co-founded by Hawiger.

In the current study, the researchers tested whether, in a mouse model of hyperlipidemia, two novel, pathway-selective forms of this peptide could, as they put it, "stop pro-inflammatory and metabolic transcription factors in their tracks" at the nuclear transport checkpoint.

"Experimentally, by targeting the nuclear transport checkpoint, we suppressed the burst of inflammatory mediators while lowering elevated levels of blood glucose, triglycerides, and cholesterol and protecting small blood vessels from injury in the liver, lungs, heart and kidneys," Hawiger said.

"Our findings are of significant relevance to individuals displaying signs of metabolic syndrome that predisposes them to life-threatening microbial diseases, including recent outbreaks of COVID-19 as well as autoimmune and allergic disorders," the researchers concluded.

The research was supported by grants from the U.S. Department of Veterans Affairs and the endowed McGavock Chair at Vanderbilt.