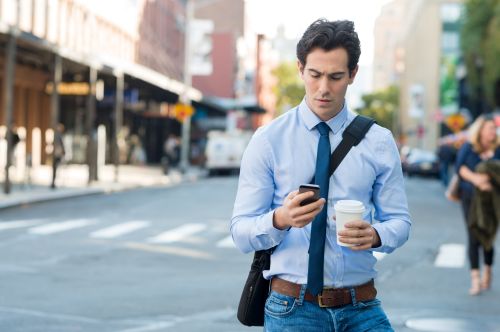 Coronavirus infections among vaccinated people are on the decline but for the unvaccinated, cases continue to increase. Researchers at Carnegie Mellon University and the University of California, Los Angeles found text-based nudges are an effective way to remind people to schedule their first COVID-19 vaccination appointment and show up. The results of the study are available in the August 2 issue of the journal Nature.

“The Delta variant is driving increased COVID infections across the globe, and currently in the United States more than 97% of COVID related hospitalizations are in unvaccinated people,” said Daniel M. Croymans, MD, MBA, MS, a primary care physician at UCLA Health and co-author on the paper. “Our study highlights that marrying text messaging, a widely accessible technology, alongside behavioral science, may help deliver messages that encourage others to get vaccinated – helping to protect our community and our economy.

Vaccination efforts have been hindered by safety concerns and misinformation, as well as by barriers to action, such as forgetfulness, hassle cost and procrastination among those who intend to get vaccinated. The research team conducted two large randomized controlled trials to identify methods that could overcome barriers to schedule an appointment and get the vaccine. The study involved UCLA Health patients eligible for COVID-19 vaccine in February 2021, mostly people over 65 years of age or with a pre-existing condition.

Saccardo was joined by Hengchen Dai, assistant professor at UCLA Anderson School of Management and applied their expertise in behavioral science to construct the study. They partnered with Daniel Croymans, MD, MBA, MS, in Internal Medicine at UCLA Health and his team at UCLA Health, who led the patient outreach effort.

After initial notification of eligibility for the vaccine, participants in the first randomized trial received one of four types of text message or no text reminder. Each of the five groups consisted of around 20,000 people. The text nudge was subdivided into four styles: 1) a simple text reminder; 2) simple text reminder with an informational video; 3) a text crafted with ownership language like ‘The vaccine has just been made available for you’ and “Claim your dose,” and 4) a text with ownership language and the informational video.

The text message boosted appointment rates at UCLA Health. The baseline appointment rates within six days were at 7.2% among patients without a reminder, while patients who received a reminder increased their appointments to13.2%, an 84.33% increase. In addition, the text message accelerated how quickly the vaccinations were scheduled and acquired, increasing vaccination rates at UCLA Health within a month from 13.89% to 17. 56%. This approach was particularly effective with the population that typically schedules a seasonal flu shot, and the benefits even held when the researchers examine vaccinations obtained outside of UCLA Health clinics.

“I was surprised that adding an information intervention to text reminder did not yield a detectable effect on actual vaccination behaviors among UCLA Health patients,” said Dai. It is very interesting that while a video-based intervention seems to elevate vaccination intentions in a hypothetical setting where people are asked to watch the video, this intervention does not yield benefits in the field where people are invited to watch the video and where we assess actual behavior.”

The second randomized trial consisted of more than 67,000 people who did not schedule an appointment after receiving the first reminder and were divided into two groups. On the eighth day following the initial invitation, one group received a second reminder text received a second text message and the other did not.

The found when people got a second reminder they were more likely to schedule their first does within six days (1.65 percentage points) and obtain the vaccination (1.06 percentage points). While the change is small, Saccardo and Dai point to the fact that the group being vaccinated were initially hesitant.

According to Saccardo, vaccination strategies should focus on helping people overcome barriers to scheduling the first dose. Text reminders proved to be an effective method to motivate people across demographic groups.

“One simple reminder, which is cost effective, could prompt people to schedule their appointment,” said Silvia Saccardo, assistant professor in the Department of Social and Decision Sciences at CMU and contributing lead author on the paper. “Getting scheduled for the first does was the biggest barrier. Once scheduled, people went to the appointment and then returned for their second dose.”