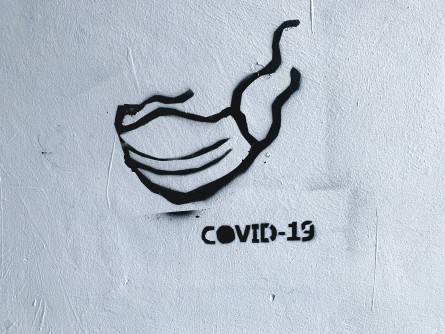 A nationwide chorus is urging the wearing of homemade facemasks in public to fight the spread of the novel coronavirus. One voice is that of is physicist Walt de Heer who here explains some of the logic behind wearing the protective covering, starting with old-fashioned wisdom.

“Your mother told you to cover your mouth when you cough, and this is the best way to do it without fail,” said de Heer, a Regents Professor in Georgia Tech’s School of Physics.

De Heer advocates that widespread use of masks can save hundreds of lives in just days, and he is not alone. The Centers for Disease Control and Prevention, the U.S. Surgeon General, and the White House have officially recommended cloth face coverings.

Since people can carry the coronavirus with no COVID-19 symptoms and still spread the virus, everyone is a potential carrier, which means that everyone should wear a DIY mask in public, de Heer said. He compared it to coughing into your sleeve but even better because a DIY mask is always in front of your face, and it can be made out of more effective fabrics than a sleeve.

All of these parties, including de Heer, want people to not buy up masks needed by clinicians. N95 masks are not only not necessary for the general public but are also ineffective for many people, which could be dangerous.

“N95 masks are difficult to wear correctly, and they are hard to breathe through. They are not as effective for everyday use as a more comfortable cloth mask,” de Heer said.

U.S. Surgeon General Jerome Adams has cautioned that wearing masks must not discourage other behaviors to fight contagion like handwashing, avoiding touching your face, and social distancing.

As a researcher, de Heer is a leading expert on small clusters, particles the size of the misty droplets that shoot out of mouths when people sneeze or cough. The bigger droplets, the higher the viral loads they likely contain, and face covers catch nearly all larger drops and most smaller ones as well.

Breathing mist from a cough or sneeze or getting it in the eyes, nose, or mouth is likely the primary source of contagion for the coronavirus, according to the CDC. There have also been reports that the mist may hang in the air like exhaled cigarette smoke that people can inhale and become infected.

A hand-sewn mask out of cloth that has a tighter weave can cut down sharply on the mist, de Heer said, but even a bandana is much better than nothing.

“For math’s sake, say a bandana stops 80 percent of dangerous mist. That protection increases when everyone wears them. So, if two people are wearing bandanas – the sender of the spittle and a potential receiver – the math tells us that two bandanas would catch 96 percent of the dangerous mist. This shows that we all need to be wearing something.”

Hordes of Americans wore masks during the last great pandemic to hit the country, the Spanish flu of 1918-1919. Nurses handed out white gauze masks, and people also made them at home.

One country in particular impressed upon de Heer that the effectiveness of masks – the Czech Republic. A recent movement there led to the very widespread use of homemade cloth masks, and that country also has a very mild curve of new COVID-19 infections.

Countries turn a variety of weapons against contagion with varying success or failure, so it can be hard to determine if a single one stands out. But some countries have clearly reduced the rise in contagion as well as death rates more effectively.

Some are known for world-class healthcare systems with large capacities to serve their populations, but at the same time, they have displayed signature measures in the struggle. In the Czech Republic, this has been widespread cloth mask use.

“If you look at Western countries – and I’m going to include the state of New York in that list – New York has had really high increases in new cases. So have Spain, Italy, and France,” de Heer said. “Then you have outliers. Germany and Austria got out ahead of the game by getting widespread testing going very early on."

The Czech Republic has been another distinct outlier. So have many other places where masks are ubiquitous such as Hong Kong, Japan, or South Korea, de Heer noted, even though they are densely populated, making social distancing more challenging.

Austria also recently mandated the use of face covers when grocery shopping, following the lead of the Czech Republic. De Heer points to the Czech experience and that of successful Asian countries as very conspicuous evidence that masks help and that it is wise to adopt widespread use in the United States as well.